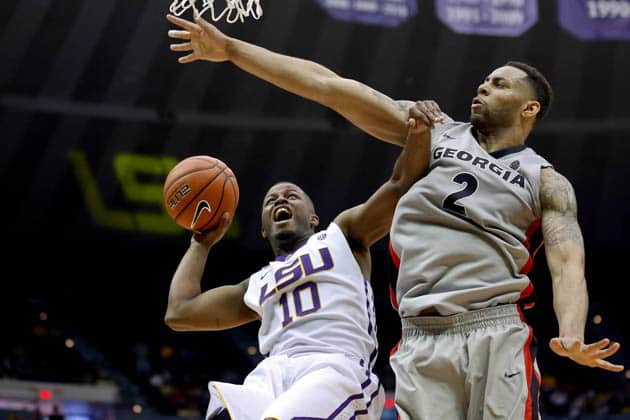 Charles Mann scored 22 points and Kenny Gaines added 21 as Georgia cruised past LSU 69-61 here Saturday and added a chapter to the program’s history in the process.

The Bulldogs (18-12, 12-6) completed the regular season tied with Kentucky for second place in the final Southeastern Conference standings. Not since 1990, when Georgia won the SEC championship with a 13-5 mark, has a Bulldog team earned this high a finish.

Just as important, the Bulldogs earned the No. 3 seed at the SEC Tournament next week in Atlanta. The reward for the top-four seeding is a double-bye through the tournament’s first two rounds. They’ll play either Vanderbilt, Mississippi State — which face each other Wednesday night — or No. 6 seed Ole Miss on Friday night at approximately 9:30 p.m. (EDT).

“I’m really proud of our kids,” said Georgia coach Mark Fox. “I thought we came with a determined look about them on this trip. We talked about that before we ever left Athens. We didn’t want to rely on someone else to help us out. Let’s go play well and win this game.”

Georgia led early in this game, relented briefly during first-half play and took control with a rock-solid second half. The Bulldogs shot 48 percent for the game, 60 percent from 3-point range, and outrebounded the Tigers 37-29. They committed 16 turnovers for the game but only three in the second period.

The Bulldogs used a 9-0 run early in the second half to tighten their grip on the game. Nemi Djurisic started the run with a short banker at the 15:57 mark, pushing the Georgia lead to 40-35. After an LSU miss, Gaines connected from beyond the arc for an 8-point lead. Djurisic followed on Georgia’s next two trips with layups, the latter with 14:04 left, to get his team a 47-35 lead.

Two minutes later Gaines restored the Bulldog lead to double digits at 57-46 by rebounding his own miss and scoring with 7:32 left. Georgia kept LSU at arm’s length for much of the remainder with its performance at the free-throw line. The Bulldogs, whose last field goal was a Mann 3-pointer with 4:30 left, scored their final six points on foul shots.

Georgia will enter the SEC Tournament next week breathing rarified air, for Georgia at least. No Bulldog team in the past 12 years has enjoyed a bye until Friday. The significance of the accomplishment is not lost on Fox, yet he insists his team remain zeroed in on its most immediate goals.

“We knew the stakes coming into this game,” Fox said. “We’re smart enough to know what was at stake today. But I think what’s important for us is that we play Friday. As we get ready to play that game, no matter who it’s going to be against or when it is, we stay focused on that one particular game.”

FROM THE GAME
> The win gives Georgia an 18-12 overall record, 12-6 in SEC play.
> Georgia’s 12 SEC wins is the most for the program since the 1990 SEC Championship team went 13-5 in the regular season.
> The win was Georgia’s fourth road victory in SEC play.
> Georgia won in Baton Rouge for the first time since 2002.
> Charles Mann picked up his first career double-double with 22 points and 10 rebounds. He needed every second of his team-high 34 minutes to get it. Mann got his 10th rebound with just 18 seconds left in the game.
> Kenny Gaines made six 3-point shots for the second time in three games. Over the last seven games of the regular season, he shot 56.8 percent (29×51) from beyond the arc.
> Georgia outrebounded its 15th SEC opponent in 18 tries this season.
> Sophomore forward Brandon Morris suffered a cut by his left eye and received stitches at halftime of today’s game. He did not return to action.