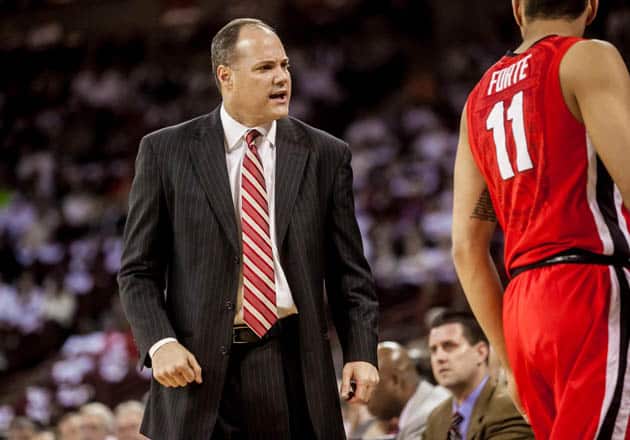 The Georgia men’s basketball team used a 16-1 run to open the second half and beat South Carolina 73-56 on Saturday afternoon at the Colonial Life Arena.

During the Georgia run, the Bulldogs held South Carolina to 0-14 from the field, which contributed to the Gamecocks’ 16 percent second-half shooting performance. The Bulldogs took advantage of South Carolina’s poor second half, shooting nearly 50 percent to help them break the game open and secure its 15th win of the season.

“We got off to a quick start in the second half,” said head coach Mark Fox “Defense was really the key for us today. At halftime, we talked about getting back to what we’re good at and that’s doing things like digging down in the trenches and grinding it out. South Carolina has been playing well so it took us a great defensive effort to get the win today.

“We have put ourselves in a position to still have some things to play for. Since Thanksgiving, we’ve been pretty solid. We’ve been getting better and better. I we think we can still improve but we have a lot of guys chipping in right now and I’m thankful for that.”

In the first half, South Carolina led by as many as seven points, going on a 10-0 run in the opening minutes to give the Gamecocks a 13-6 lead. Shortly after, the Bulldogs fought back, putting together a 12-2 run to take a 23-19 lead with seven minutes remaining in the half.  There were three more lead changes before the teams entered the halftime break tied 34-34.

Sindarius Thornwell and Brenton Williams paced the Gamecocks with 18 and 16 points, respectively.

The Bulldogs return home to face Missouri (19-7, 7-6) on Tuesday at 9:00 p.m. The game will be televised on ESPNU. For ticket information, go to Georgiadogs.com.

The Series: Georgia improves to 54-48 all-time vs. South Carolina, and is now 8-2 vs. the Gamecocks under head coach Mark Fox. With today’ win, the Bulldogs have swept the regular season series and have won the last five matchups in the series.

Next Up: Georgia will welcome Missouri (19-7, 7-6) to town on Tuesday night. The game is scheduled for a 9 p.m. tip-off and will be televised on ESPNU.