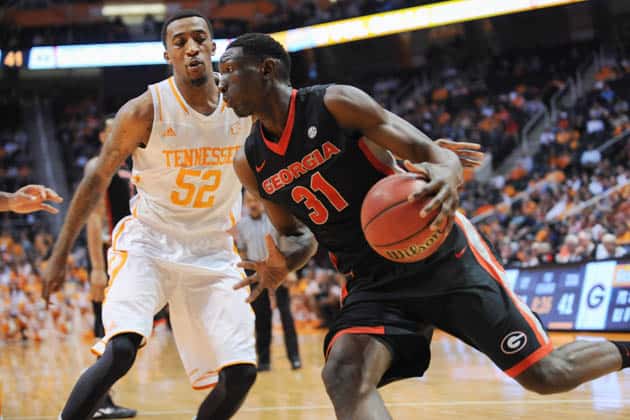 “We didn’t play well enough to win,” said head coach Mark Fox. “We didn’t have the bounce in our step that we needed to get stops. We got worn out on the backboards. Like all conference games, win or lose, you have to learn from it and move onto the next game and we’ll do that with this one.

“[Jarnell Stokes] wore us out. Give him credit, he was the aggressor and we just couldn’t get him contained. He’s a good player and he came in very determined today. He got the ball in some good spots and made some plays. He had a really good night.”

Facing a six-point halftime deficit, the Bulldogs went on a 7-2 run to cut the deficit to just 38-35 to open the half, but that’s as close as Georgia would get.

In the first half, Georgia trailed 28-23 with five minutes remaining, but freshman J.J. Frazier scored five straight points to tied the game at 28-28. The Vols recaptured momentum, ending the half on a 6-0 on run of their own to take a 34-28 lead into the halftime break. The Bulldogs led three different times with its final advantage coming with eight minutes left in the first half.

The Bulldogs only attempted 11 free throws during the game—a season low.

In addition to Stokes, Jordan McRae and Antonio Barton scored 12 and 11 points, respectively.

The Series: Tennessee improves to [92-56] in its all time series with Tennessee.

Next Up: Georgia will travel to Columbia, S.C. to play the Gamecocks on Saturday at 1:30 p.m.