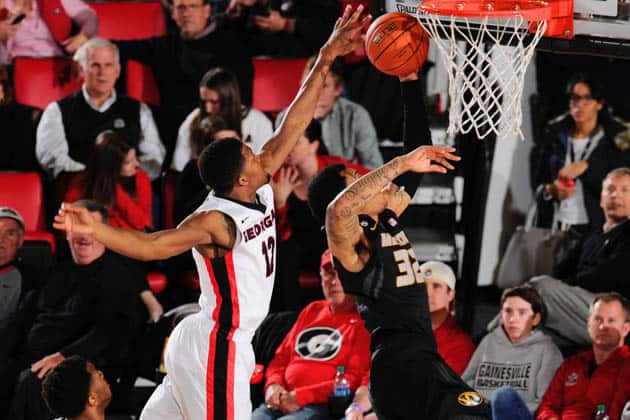 The Georgia men’s basketball team completed a season sweep of Missouri with a 71-56 win at Stegeman Coliseum on Tuesday night. The Bulldogs have won ten conference games for the first time since the 2003 season.

“That was a really, a hard fought game,” said head coach Mark Fox. “Missouri has a really good basketball team. They have such a good team that our team had a great respect for them so we were very ready to play. We defended very, very well. We didn’t rebound like we had hoped, but our defense was good. And I thought offensively, we shot the ball pretty well and played a pretty complete game.”

The Bulldogs ended the first half on a 10-2 run, capped by back-to-back three-pointers by Nemanja Djurisic, to take a 31-22 lead into the locker room and carried the momentum into the second half.

Juwan Parker and Thornton combined to put the Bulldogs on a 9-3 run to give Georgia a 14-point lead just five minutes into the second half. After the Tigers cut the lead to ten, Georgia went on a deafening 14-4 run to take a 20-point lead with just four minutes remaining.

With the outcome already decided, Missouri closed the game scoring eight straight points to cut the margin to 15 points.

Georgia held Missouri to just 32 percent shooting from the field, including 3-of-18 from three-point range.

The Bulldogs next travel to Fayetteville to play Arkansas on Saturday at 4 p.m. The game will be televised on SEC-TV.

The Series: With tonight’s win, Georgia sweeps the season series with the Tigers. Georgia is 2-4 all-time vs. Missouri.

Next Up: Georgia will travel to Arkansas (18-9, 7-7) for a 4 p.m. Saturday tip-off. The game is will be televised on SEC-TV. Georgia is 14-17 all-time against the Razorbacks, but beat them earlier this season at home in overtime, 66-61. The Bulldogs will be going for their third conference series sweep.