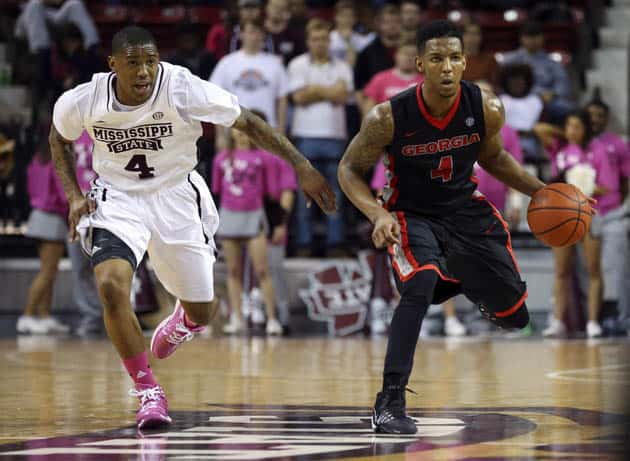 The visiting Bulldogs (13-10, 7-4) now find themselves tied with Ole Miss for third place in the SEC standings. The two teams will face one another Saturday afternoon in Athens in a 4:00 p.m. tipoff.

“I was really proud of our young men for fighting through some adversity tonight,” Georgia head coach Mark Fox said. “We’ve had quite a bit of adversity. And we dug ourselves a hole with a poor start. But in the second half we played pretty mature basketball. It certainly feels good to win under these circumstances.”

Georgia followed the Thomas trey with its fourth turnover of the half, prompting Fox to call a time out. The Bulldogs then chipped away at their deficit as the first half waned. A 3-pointer from the right corner by Brandon Morris with 2:03 left brought them within 25-24. Marcus Thornton’s bucket with 36 seconds left restored the margin to 27-26.

The first half closed on a pivotal exchange, when Parker rebounded a State miss and was fouled by Thomas with just 1.6 seconds left. Parker’s two free throws gave Georgia an unlikely lead, which stood for the game’s remainder.

“I thought we showed some composure after our slow start and didn’t panic,” Fox said. “Our kids realized we made some errors. We got it cleaned up, got it back to a ballgame toward the end, and then Juwan was fortunate to get us the lead going into halftime.”

Georgia played perhaps its best basketball of the season in blowing past State in the final period. The Bulldogs made their first eight shots, finished the half shooting 74 percent, and were never seriously threatened once the lead reached double digits.

Perhaps the unusual travel schedule, thanks to the prevailing winter storm, caused the Bulldogs’ slow-footed start. Adding to their troubles was a stomach virus that had invaded nearly the entire roster. “I was in the locker room before the game, during warmups, and Juwan is in the bathroom getting sick,” Fox said. “I turned to put J.J. (Frazier) in the game in the first half and they told me he was in the bathroom getting sick. We need to get our guys back to being healthy. But I was really proud of them for fighting through adversity.”

– The Bulldogs won their second road game of the season and their second straight in Starkville, having won an overtime decision in 2012.
– Juwan Parker scored a career high 14 points in the second half alone.
– Donte’ Williams notched his second straight double-figure rebounding game and fourth of the season.
– Georgia has won three consecutive SEC games by double digits for the first time since the 1998 season.
– Freshman Kenny Paul Geno came off the bench, played 14 minutes and chipped in a career-high six points, nearly half of his entire season of 13 points, and two rebounds. Geno was supported by nearly 100 fans from his hometown of Booneville, Miss., a 90-minute drive from Starkville.
-The Bulldogs are spending Wednesday night in Starkville. Current plans call for an early afternoon departure from the Columbus, Miss., airport. Destination and arrival time were not yet known.