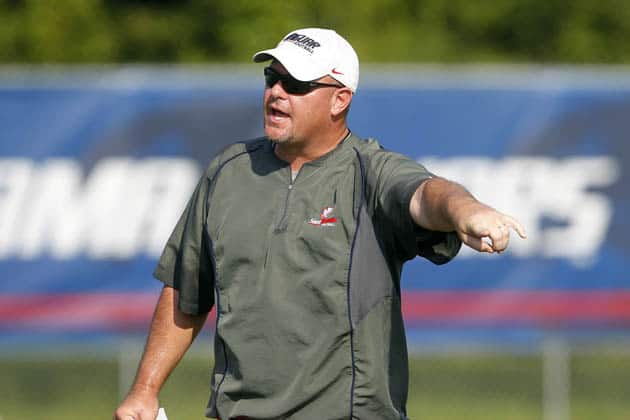 Kevin Sherrer, defensive coordinator at South Alabama in 2013, has been named a defensive assistant at the University of Georgia, according to an announcement Friday by UGA head coach Mark Richt.

Sherrer, who served as Director of Player Development at Alabama for three years prior to joining the South Alabama staff, coached defensive backs for the Jaguars. The 2013 South Alabama defense ranked second in the Sun Belt Conference in total defense (384.3 yards per game) and second in scoring defense (25.2 points per game).

“I’m excited about Kevin joining our staff,” Richt said. “He has worked with Jeremy Pruitt at both Hoover High School and Alabama, and they already have a great relationship that will translate well to the field. Kevin is an exceptional football coach who cares about his players and is going to be a tremendous asset to our program.”

At Alabama, Sherrer’s responsibilities included assisting Crimson Tide student-athletes with academics, community outreach and their personal lives.  During his tenure, UA posted a 35-5 (87.5%) mark while winning the BCS national title in 2011 and 2012 and the 2012 Southeastern Conference championship.

“This is a tremendous opportunity to work with Coach Richt and UGA and be back with Jeremy (Pruitt, defensive coordinator) and Will (Friend, offensive line coach) from my playing days at Alabama,” said Sherrer. “Georgia is a great state that I’ve recruited, I know the type of players and the coaches in this area. I’m looking forward to doing my part to make Georgia a championship team.”

Prior to joining the staff at Alabama, Sherrer was an assistant coach at Hoover (Ala.) High for five years, including serving as defensive coordinator the final three.  In his first season on the staff, the Buccaneers claimed the state 6A championship, a feat they would repeat in 2009, while in two of his other three years with the program HHS advanced to the title game.  While Sherrer was on the staff, the Buccaneers posted a 61-12 (83.6%) record.

Sherrer was also the defensive backs coach at Spain Park (Ala.) High School from 2001-04, where he helped the Jaguars win 16 games his last two seasons after going 3-7 in the school’s first-ever year competing in football.  SPHS finished 7-4 the following fall after qualifying for the state 6A playoffs, while in 2004 the Jaguars advanced to the quarterfinals en route to a 9-4 overall mark.

He got his start in the coaching ranks as an assistant at Tuscaloosa County (Ala.) High during the 1996 and ’97 seasons; Sherrer helped lead the Wildcats to the state 6A championship in his second year on the staff as well, as they would go 21-6 (77.8%) during his tenure with the program.

He was also a graduate assistant at Alabama from 1998-2000, assisting on defense while also helping to coordinate scout teams, video breakdown and on-campus recruiting.  The Tide won the 1999 SEC title and played in the Orange Bowl that season, also participating in the Music City Bowl during that three-year span.

Sherrer was a tight end for the Crimson Tide from 1993-95, during which time Alabama recorded a 29-7-1 (79.7%) overall mark while winning the SEC Western Division title twice.  UA ended the 1993 campaign 9-3-1 after defeating North Carolina 24-10 in the Gator Bowl, and the next season put together a 12-1 record following a 24-17 victory over Ohio State in the Citrus Bowl to end the year.

He is a 1996 graduate of Alabama with a degree in physical education, and he earned his master’s degree in higher education administration from the school in 2000.  Sherrer and his wife Carrie have twin 13-year-old sons, Kaleb and Kyle.