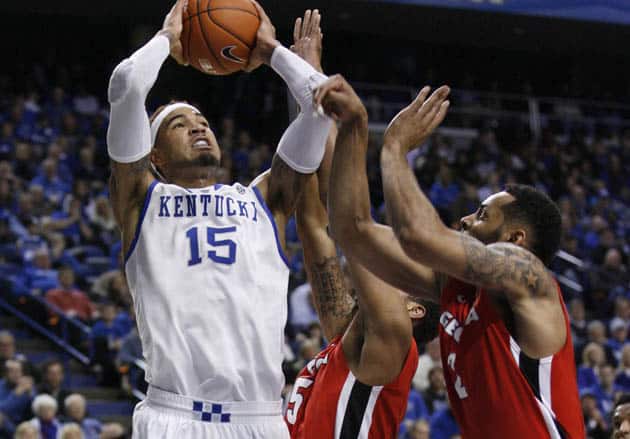 A shorthanded Georgia men’s basketball team couldn’t overcome a 19-3 second half run and fell to No. 14 Kentucky 79-54 Saturday afternoon at Rupp Arena.

“I thought we played well early especially on the defensive end, but we just couldn’t sustain it offensively,” said head coach Mark Fox. “We competed. We didn’t play as well as we wanted to play but we did compete, so that part was a good sign. There wasn’t one second prior to the game or through the majority of the game that we didn’t think we could win it. We fought through adversity and we were playing uphill and we got it back to single digits [early in the second half] but we didn’t capitalize when we got it there.”

After forcing Kentucky (15-4, 5-1) to several early turnovers, Kentucky went on a deafening 20-2 run midway through the first half to take a 25-10 lead with six minutes remaining. However, the Bulldogs would slow the Wildcat momentum back cut the halftime deficit to 34-22, largely behind 12 first-half points from Brandon Morris.

To open the second half, Georgia held Kentucky without a field goal for the first four minutes to cut the Wildcats’ lead to just six points, but Kentucky responded with two offensives, the last of which put Kentucky on a 19-3 run to give it a 24-point lead, its largest of the game.

“It crippled us,” continued Fox. “Injuries are part of the game and we have to deal with that, but [the guard spot this year] is where we have two guys so when they both get hurt it puts us behind the eight-ball.”

Aaron Harrison and Julius Randle paced Kentucky with 15 and 14 points, respectively. The win was Kentucky’s 21st straight at Rupp Arena.

Georgia returns home to host Vanderbilt (10-8, 2-4) on Wednesday. The game will tip-off at 7:00 p.m. and will be televised on CSS. For ticket information, go to Georgiadogs.com.

Georgia vs. Kentucky Notes
Worth Noting….
• Georgia’s starting lineup was Marcus Thornton (44th career start), Brandon Morris (29th), Charles Mann (24th), Nemi Djurisic (25th) and Donte’ Williams (77th). It’s the second time that this starting lineup has been used this season (Wofford).
• Georgia was without Kenny Gaines and Juwan Parker who both sustained injuries in Wednesday’s game against South Carolina. Both players had seen action in every game this season.
• Today’s game marked the first Georgia loss that it has outrebounded its opponent (35-32).
• Georgia tied a season-high with 20 turnovers (20, George Washington)
• Georgia gave up a season-high 10 blocks to the Wildcats (7, Nebraska and Chattanooga)

The Series: Georgia falls to 26-116 in its all-time series with Kentucky.

Next Up: The Bulldogs will host Vanderbilt on Wednesday. The game is scheduled to tip-off at 7 p.m. and will be televised on CSS. The Commodores lead the all-time series 85-51, but the Bulldogs hold a 35-27 advantage when the game is in Athens. Vanderbilt has won the last seven matchups.