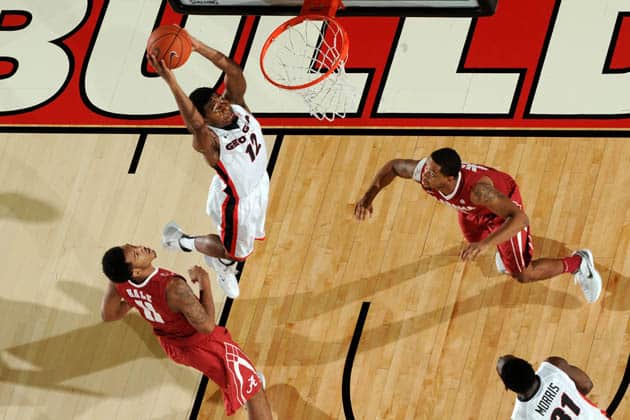 “That was really a hard-fought game,” said head coach Mark Fox. “We thought coming into the game that Alabama was just terrific defensively and that it would be a game that had to be won in the trenches. We talked about trying to play a determined 40 minutes and we had to do that to beat a good Alabama team. They really guarded us and we couldn’t score, but we guarded them also and that certainly was the difference in the game. Our defensive rebounding allowed us to win.”

In the second half, Georgia shot just 19 percent from the field and Alabama shrunk the Bulldog advantage to as few as three points, but a resilient Georgia team fought back, riding a 9-3 run with seven minutes remaining to re-solidify its lead and secure its eighth win of the season. Georgia was helped by going 8-for-12 from the free throw line in the game’s final two minutes.

With the win, Georgia starts 2-0 in conference play for the first time since the 2001-02 season.

“What’s important is the next game and that we continue to grow as competitors and grow as a team and that we go down there and give us a chance to win in Gainesville, Fla.,” continued Fox. “We’ve made progress and we’ve learned through adversity. This is the first time that I’ve thought we’ve handled success fairly well, but now we have to keep moving forward and keep getting better because we can really improve as a team.”

The Bulldogs’ defense held Alabama to just 36 percent shooting from the field—nearly ten percent below its season average. The Bulldogs outrebounded Alabama 41-32 and improves to 8-0 when winning the rebounding battle.

Georgia returns to action on Tuesday in Gainesville against Florida. Tipoff is scheduled for 7:00 p.m and the game will be televised on ESPNU.

The Series: Today’s win was Georgia’s first in its last six tries versus Alabama. Georgia improves to 48-93 all-time versus Alabama, including 30-32 in Athens.

Next Up: Georgia travels to Gainesville to take on Florida (13-2). The Gators lead the all-time series 108-99.