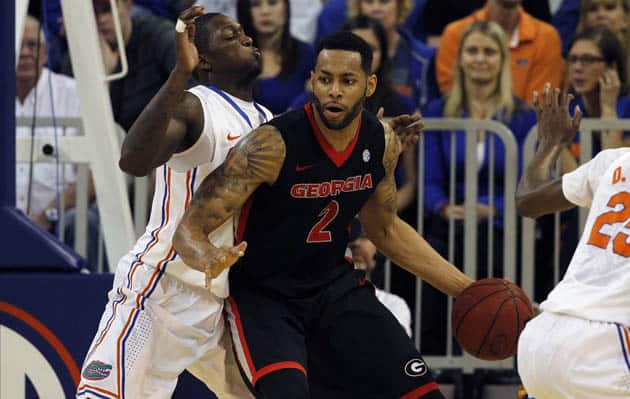 The Georgia men’s basketball team suffered its first conference loss of the season Tuesday night, losing to No. 7 Florida, 72-50. The Bulldogs fall to 8-7 on the season and 2-1 in conference play.

“Give Florida credit, they whooped us,” said head coach Mark Fox. “The game was really decided in the first half with our lack of poise offensively. We had 12 turnovers and two handfuls of bad shots at the back of the press and that lack of composure really allowed Florida to build their lead. ”

Georgia kept the Gators (14-2, 3-0) within arms reach until the home team went on a 26-5 run during a ten-minute stretch in the first half to take a commanding 36-16 lead into the halftime break. The Gators scored 16 points off of 12 first-half Georgia turnovers.

With 12 minutes left in the second half, Thornton connected on a short jumper to cap an 8-2 run by the Bulldogs, shrinking Florida’s lead to just 14 points. Georgia, however, couldn’t capitalize on a string of defensive stops to cut into the lead any further.

“We had two or three chances in a row to [cut the lead to 12 points],” Fox continued. “If you make those, the whole game can change. But we played very poorly in the first half and Florida’s defense was terrific so you have to give them credit.”

The Gators were led by Michael Frazier II who scored 21 points. Florida had three other players score in double-figures.

Georgia returns home to square off with Arkansas (11-4, 0-2) on Saturday at 1:30 p.m. The game will be televised on SEC-TV. For ticket information, visit Georgiadogs.com.

Georgia vs. Florida Notes
Worth Noting….
• Georgia’s starting lineup was Marcus Thornton (41st career start), Brandon Morris (26th), Charles Mann (21th), Kenny Gaines (15th) and Donte’ Williams (74th). It’s the fifth straight game that Coach Mark Fox has employed this lineup to start the game.
• Georgia remains winless when not winning the rebounding margin. Georgia and Florida tied at 34 rebounds apiece. Coincidentally, each team had 11 offensive rebounds and 23 defensive rebounds.
• Georgia faced its largest halftime (20) and second-half (31) deficits of the season in tonight’s loss.
• Tonight marked Georgia’s lowest point output of the season (55 vs. George Washington). Sixteen points was also the fewest the Bulldogs have scored in the first-half this season (21 vs. Gardner-Webb)
• Georgia shot just 33 percent from the field which ranks just above Georgia’s season-low performance of 32 percent (Saturday vs. Alabama).