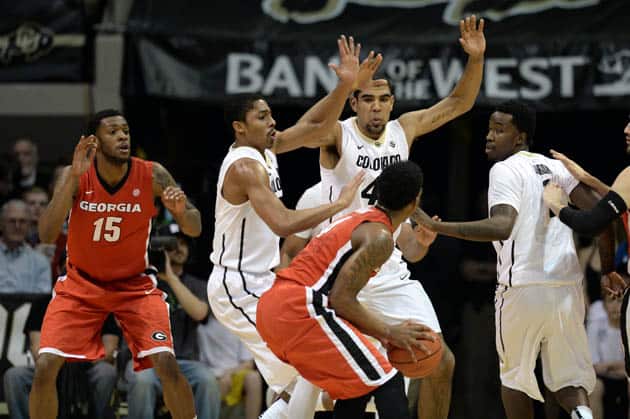 Georgia fell behind by as many as 16 points in the first half and couldn’t recover as they fell to the 21st-ranked Colorado Buffaloes 84-70 in Boulder late Saturday night.

Colorado came out of the gates hot from three-point range. The Buffaloes made five of them in the first nine minutes of the game, and their fifth gave them a 21-15 lead with 11:16 remaining in the half.

That three-pointer started an 18-5 run by Colorado that was one of the big keys to the game. The other? Colorado’s free-throw shooting. The Buffaloes went to the line 26 times and didn’t miss a single shot.

In the second half, Colorado stretched their lead back to as many as 15 points before Georgia cut it to 10 with 6:11 left in the game. But the hot shooting from the charity stripe helped the Buffaloes seal the victory.

The loss ends a five-game winning streak and drops Georgia to 6-5 overall. It doesn’t get any easier for the Hoop Dawgs with trips to George Washington and #25 Missouri up next.