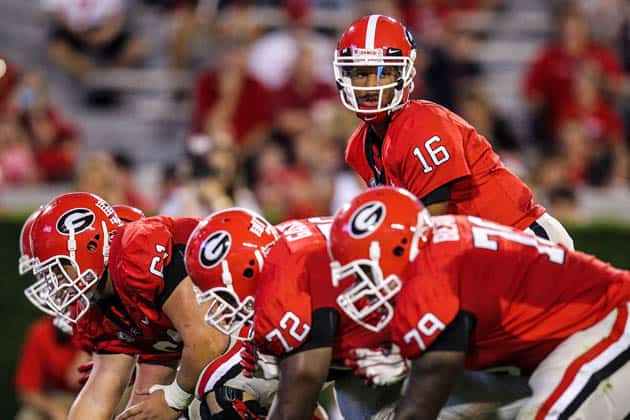 Jacksonville State is an FCS school located in Jacksonville, Alabama. Former UGA running back Washaun Ealey played for the Gamecocks after transferring there in 2011.

On Thursday in Jacksonville, Mark Richt confirmed to reporters that Christian LeMay will indeed transfer, but didn’t want to elaborate.

“First of all, the family was hoping to just not make a big deal of it,” Richt said. “But they wanted Christian to finish his time with Georgia before any kind of announcement is made. So I’m gonna try to stick to that.”

Christian LeMay is currently a redshirt sophomore. He signed with the Bulldogs almost three years ago and redshirted in 2011. In 2012, he appeared in five games and completed 1-of-2 passes for 43 yards and rushed for 67 yards.

LeMay was rated as the #3 quarterback recruit by Rivals.com and #5 by ESPN.com.

Earlier today, safety Shaquille Fluker confirmed to Anthony Dasher of UGASports.com that he is indeed transferring to Jacksonville State.

News of Fluker’s transfer broke on December 17. Fluker did not play this season after reportedly suffering a 10-minute seizure in practice. Team doctors felt that Fluker should be held out the remainder of the season, which he was.

Fluker feels like he can play, so he has opted to transfer to Jacksonville State where he should have two years to play two.

Fluker signed with Georgia in February 2013 out of East Mississippi Community College in Scooba, MS. He went the JUCO route after attending Meridian High School and not qualifying to enroll.

In two seasons at EMCC, Fluker had 106 tackles and seven interceptions and helped the Lions win their first-ever NJCAA National Championship in 2011.