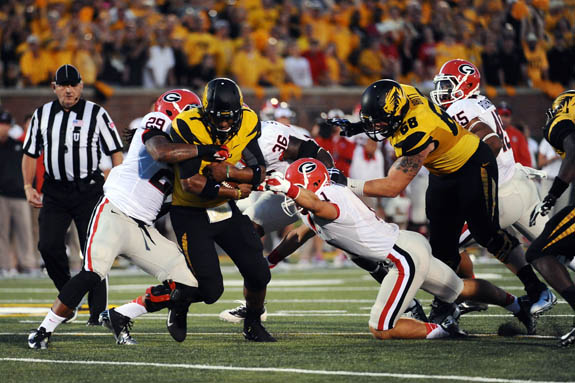 On Saturday, No. 7 Georgia Bulldogs host the No. 25 Missouri Tigers in a pivotal SEC East match-up. The game will be televised by ESPN at noon ET.

Georgia enters the game 4-1 and 3-0 in the SEC after a 34-31 overtime victory at Tennessee last weekend. After the win, the Dawgs dropped one spot to seventh in both the AP Poll and Coaches Poll.

Missouri (5-0, 1-0) dominated Vanderbilt last week 51-28 in Nashville. That was the first SEC game of the season for Missouri after four straight non-conference victories.

Georgia looks to be the better team, but they will be without several key players. Running back Todd Gurley is questionable for the game and certainly won’t start.

And the list goes on. Wide receiver Michael Bennett will miss a few weeks after tearing his meniscus in his right knee, while punter Collin Barber is questionable with a concussion.

With all of that being said, the Dawgs still have a good shot at beating Mizzou. After all, they are playing Between the Hedges and they are a 7.5 favorite after starting out 10.5.

The Bulldogs need to start out strong and not let the Tigers hang around and think they have a chance in this game. Aaron Murray will continue to lead UGA’s impressive offense, while the young D just needs to continue to improve and make key stops.