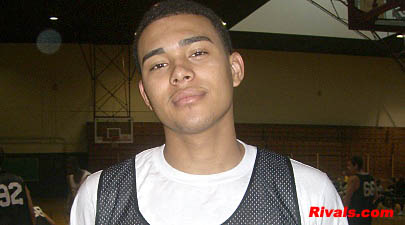 Cameron Forte has committed to UGA.

Cameron Forte, a JUCO small forward, has committed to the Georgia Bulldogs. He is the fourth recruit for Mark Fox’s 2012-13 class.

“I just committed to the University of Georgia on a full ride scholarship to play basketball!,” Forte announced on Twitter today (@Smoothiewhatup).

Forte (6-7, 210) currently attends Howard Junior College in Big Spring, Texas and has three years of eligibility remaining. In his first season there as a redshirt freshman, he averaged 22.5 points, 7.5 rebounds, and 2.6 assists per game.

“I just talked to Coach Fox. He was pretty excited,” Forte told UGASports.com. “I just felt like it was the best. I felt most comfortable with their coaching staff and the players. It’s a growing program.”

Forte signed with Texas Tech and former head coach Billy Gillespie out of high school. After one season with the Red Raiders and not getting into a game, he transferred to Northern Arizona.

However, Forte was unable to obtain a waiver to play immediately at NAU. So he then transferred to Howard J.C.

The late signing period began on Wednesday and runs through May 15.