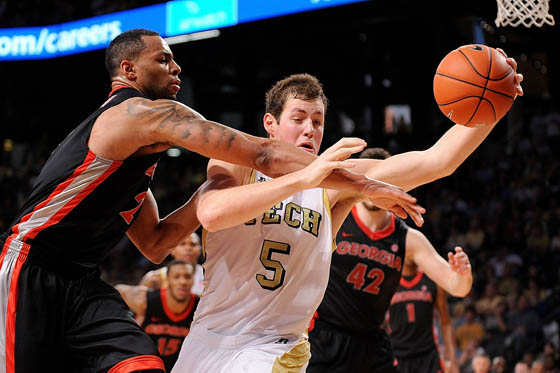 The Georgia Bulldogs will host the Georgia Tech Yellow Jackets at Stegeman Coliseum on Friday, November 15, 2013, Sicemdawgs.com has learned through an open records request.

It will be the first time Georgia and Georgia Tech have met in November since the 2002 season. The last three games were played in the first week of December.

Georgia Tech leads the overall series against Georgia 103-86. In their last meeting on Dec. 4, 2012, the Yellow Jackets defeated the Bulldogs 62-54.

Earlier this week, Seth Emerson of The Telegraph talked to head coach Mark Fox about the 2013-14 schedule:

As for the 18-game SEC schedule, Fox said the teams he knows he will face twice include South Carolina (the designated home-and-home rival), Missouri, Arkansas and LSU. There is one other team but Fox wasn’t sure of it yet. It’s definitely not Tennessee, Florida or Alabama, and Fox didn’t think it was Kentucky either.

“We’ve still got some work to do on the schedule. Really, with Kentavious’ decision, we’re trying to put games in the right places, make sure we get the right strength of schedule. It’ll take us awhile to finish it,” Fox said Thursday night prior to appearing at Macon’s UGA Day.