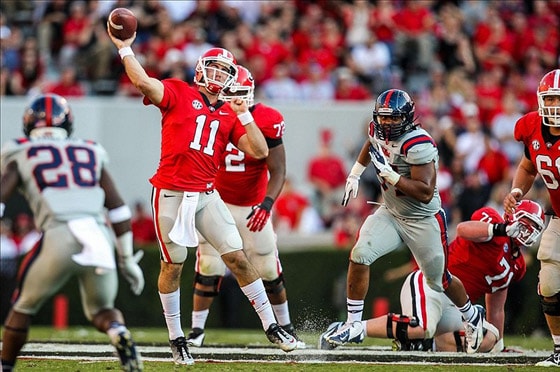 Aaron Murray tossed four touchdown passes to lead the Georgia Bulldogs over the Ole Miss Rebels 37-10 on Saturday. The win improves Georgia’s record to 8-1 overall and 6-1 in the SEC.

The Bulldogs got off to a slow start and fell behind 10-0 early in the second quarter. But then Murray sold a handoff fake on 3rd and one and completed a 66-yard touchdown to Marlon Brown. Later in the half, Murray completed a 40-yard touchdown pass to Tavarres King to give the Dawgs a 14-10 lead at halftime.

In the second half, Murray added touchdown completions of 42-yards to Malcolm Mitchell and a 23-yards to Rantavious Wooten. UGA’s other scores came on an Alexander Ogletree 8-yard run and a safety by the defense.

Murray finished the day 21-of-28 for 384 yards, four touchdowns and no interceptions. Marlon Brown, who left the game with an injured knee, led all receivers with 3 receptions for 113 yards and a TD.

On the ground, Todd Gurley again led the Dawgs with 117 yards on 18 carries. Keith Marshall added 11 rushes for 28 yards.

Overall, Georgia racked up 533 yards of offense while the defense held the Rebels to only 234 yards.

Georgia now only needs a win over Auburn next week to win the East and clinch a spot in the SEC Championship Game on December 1. The Georgia-Auburn game will be televised by ESPN2 at 7 p.m. ET.