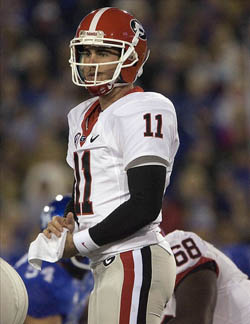 The Georgia Bulldogs beat the Kentucky Wildcats 29-24 Saturday night. The win improves Georgia’s record to 6-1 overall and 4-1 in the SEC.

Quarterback Aaron Murray was the highlight of the night, completing 30-of-38 passes for 427 yards and four touchdowns. During the game, Murray set the UGA record for touchdown passes in a career. He surpassed David Greene, who had 72.

Overall, the Georgia offense piled up 504 total yards with 427 through the air and only 77 on the ground.

Georgia’s defense struggled again last night. The Dawgs allowed 329 yards to Kentucky, including 206 rushing yards. Late in the fourth quarter, the Wildcats drove 75 yards to make it a one possession game. But the ensuing onside kick was unsuccessful and allowed Georgia to run out almost the entire clock.

Kicking was again a concern last night as Marshall Morgan missed another extra point and later bounced in a 27-yard field goal.

The winner of the Georgia-Florida game will be in the drivers seat for the SEC East title. If Georgia wins, they would also need to beat Ole Miss and Auburn to assure themselves of a spot in the SEC Championship Game.