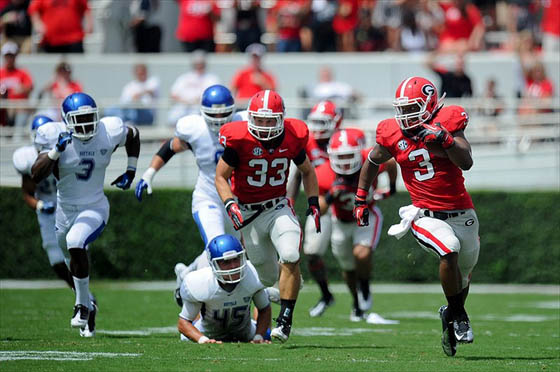 The home opener for the Georgia Bulldogs left fans with both excitement in their hearts and fear in their minds. It seemed every area had both positive and fearful implications.

For example, freshman running backs Todd Gurley and Keith Marshall were as good as advertised with the ball in their hands. Gurley stole the show with three total touchdowns but Marshall was effective as well. However, both whiffed on multiple blocks in the passing game.

Aaron Murray started sluggish but played more efficient in the second half. He did, however, seem to have the same timing issue with Tavarres King that he had last season. King could have easily had five more touchdowns last season had Murray hit him in stride on wide open passes.

At the same time, Murray never had that near interception pass he seemed to have twice a game last season. Michael Bennett and Rantavious Wooten played very well but the tight-ends were non-existent.

Then there is the offensive line. While I think they did a better job than some observers, they could have played better. They gave up three sacks but only one should fall on their shoulder. There were decent holes in the running game but there should had been greater holes considering it was Buffalo.

On special teams, the punting by committee between Adam Erickson and Collin Barber worked to perfection. Erickson was the short game spet and dropped all three of his kicks inside the 20 yard line. Barber was the long ball spet and averaged 51 yards per punt.

In the first half alone, Georgia had a kickoff returned for a touchdown by freshman Todd Gurley and a blocked punt by Chris Conley. Their coverage teams were terrific all game long.

However, true freshman Marshall Morgan looked shaky in his first game. His first extra point took a miracle to be successfully attempted and he missed badly on his first field goal attempt.

The story of the day, however, was the poor play of the defense. The Bulldogs gave up 347 yards and 23 points to a team many expected to shut out. They forced zero turnovers and had wide receivers open like the Willie Martinez days. Again, it was Buffalo.

The Bulldogs were without five potential starters in Alec Ogletree, Bacarri Rambo, Sanders Commings, Chase Vasser and Malcolm Mitchell. This played a part in their sluggish performance. However, lets be honest, the third string for Georgia is far more talented than the starters for Buffalo.

I believe part of the problem was the preparation leading up to the game. The Bulldogs were not preparing for Buffalo, they were tuning up for Missouri. Coach Richt even let this information slip when he talked of how one of the freshmen quarterbacks was doing well simulating Tigers quarterback James Franklin.

This is normal and to be expected. The Bulldogs knew they were not going to lose to the Bulls regardless of how sloppy they played. Mix that mindset in with the humidity and the game had the feel of a glorified scrimmage.

However, this should be noted as well. The only way this was the right game plan is if Ogletree and/or Rambo play next week. All reports surfacing from Athens stated that both players were practicing with the first team defense all Fall. If this is the case, this was a terrible mistake. They should have been preparing the players who were headed to Columbia.

Next week will tell the whole story. However, my initial analysis is don’t push the panic button. Their minds were in Columbia and they didn’t want to show many of their cards before hand. Expect a much more enthusiastic defense with three times as much blitzing next week.