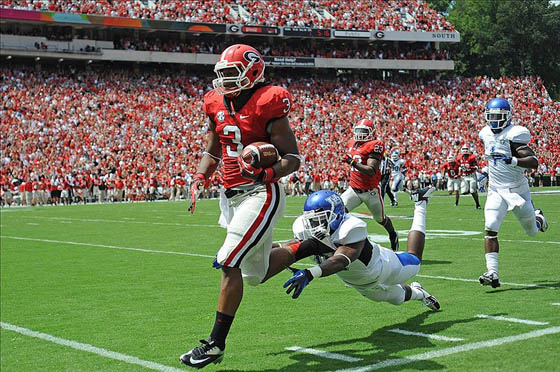 Gurley finished the game with an even 100 yards rushing on 8 carries, which is an average of 12.5 yards per carry. He scored on a 10-yard run on Georgia’s first possession of the game and then on a 55-yard run with 8:13 left in the game.

After Gurley’s first touchdown, the Dawgs led 7-0. But Buffalo answered that touchdown with a score of their own minus the extra point. On the ensuing kickoff, Gurley bolted down the left sideline 100 yards for the TD.

Ken Malcome started the game at tailback for the Dawgs, but left after injuring his hand. He rushed six times for 32 yards. Freshman Keith Marshall carried the ball 10 times for 46 yards.

Although missing a few key starters, the Georgia defense played sub-par in the first half, allowing Buffalo to score 16 points and gain almost 250 yards. The defense stepped up in the second half, allowing only one touchdown with 4:08 left when the game was already decided.