One Week Until the Dawgs Kick Off the 2012 Season

One Week Until the Dawgs Kick Off the 2012 Season 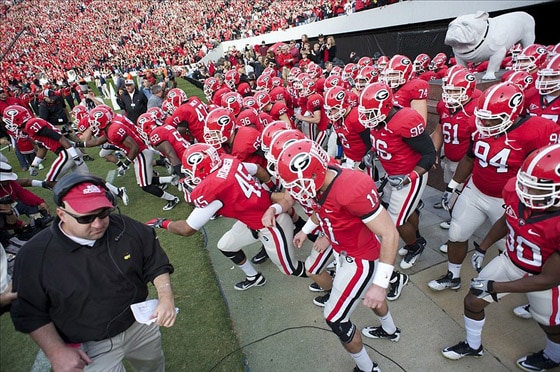 Georgia kicks off the 2012 season vs. Buffalo. (Dale Zanine-US PRESSWIRE)

There’s only one week left until the Dawgs kick off the 2012 college football season!

The SEC Network, which will broadcast the game, is a network of affiliates and the channel depends on your viewing location (complete affiliate list). Those receiving Atlanta local channels can find the game on Peachtree TV, which is Channel 17.1 over the air and Channel 17 on Dish Network and DirecTV.

Georgia is hoping to return to the SEC Championship Game for the second year in a row. But this time the Dawgs need to “finish the drill” and beat their SEC West foe.

The strength of the 2012 Georgia Bulldogs will no doubt be their defense, anchored up front by John Jenkins, Cornelius Washington, and Abry Jones. Behind them is a talented group of linebacker led by junior Jarvis Jones.

Sanders Commings and Branden Smith will start at corner, with Shawn Williams and All-American Bacarri Rambo at safety. Of course, due to suspensions, that will not be the exact secondary we see for the first couple of games.

Led by junior quarterback Aaron Murray, the Bulldogs’ offense will again be capable of producing a lot of points. But that will depend on how well the offensive line blocks for the inexperienced group of tailbacks. Sophomore Ken Malcome will be the starter for Buffalo, but freshmen Keith Marshall and Todd Gurley should see a lot of action.

Georgia’s leading receiver in 2011, Malcolm Mitchell, will also play corner this season and will fill in for the suspended Sanders Commings for the first two games. He’s an explosive play maker, so expect to see him on both sides of the ball in big games.

Marlon Brown and Tavarres King will start at split end and flanker, respectively.

The Bulldogs will head into the game ranked 6th in the country in both the AP Top 25 and USA Today Sports Coaches Top 25.

And don’t forget to wear your Kasyn Cares T-Shirt to the game if you bought one. All proceeds will benefit pediatric cancer research at the Aflac Cancer Center of Children’s Healthcare of Atlanta.