Roberts and Oquendo lead Georgia to 76-64 win over No. 22 Auburn

Roberts and Oquendo lead Georgia to 76-64 win over No. 22 Auburn 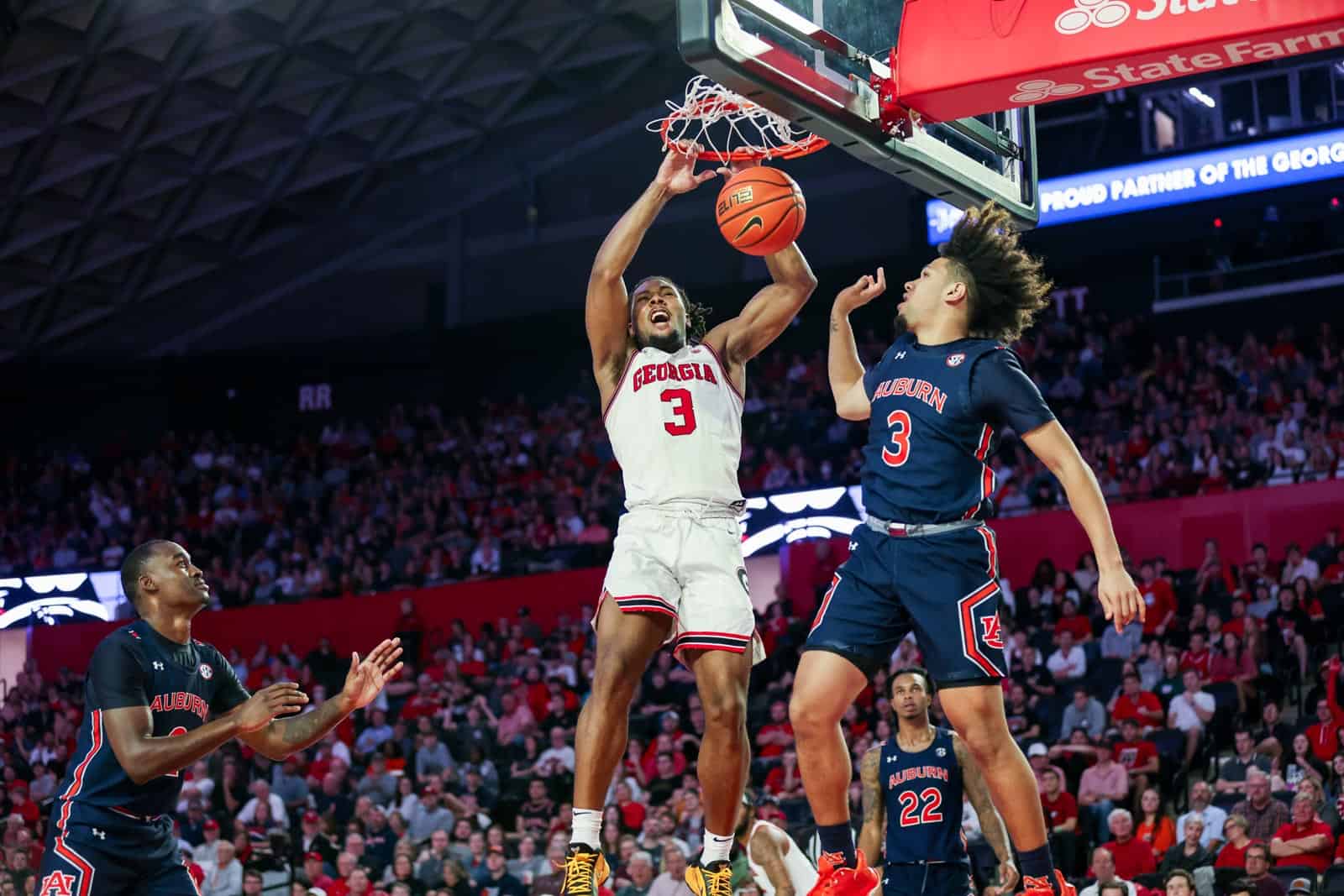 ATHENS, Ga. — The University of Georgia men’s basketball team earned its first win versus a ranked team in over a year by defeating the No. 22 Auburn Tigers, 76-64, before 10,232 spectators inside Stegeman Coliseum, thanks to strong offensive performances from junior Kario Oquendo and senior Terry Roberts, who combined for 43 of the team’s points.

Roberts led all scorers, tying his career-high in points with 26 on 8-of-16 shooting and three steals. Oquendo added 17 points himself, including a trio of 3-pointers and four rebounds. Junior Matthew-Alexander Moncrieffe was impactful all over the floor, setting season-bests in rebounds (nine), assists (three) and minutes played (31) while also contributing two steals. Georgia (11-3, 1-0 SEC) led for almost the entire game, only letting Auburn (11-3, 1-1 SEC) take the lead once.

“A big win for this team and our program to get started,” said Georgia head coach Mike White. “Off to a 1-0 start against a high-level program and high-level team in Auburn. Obviously, our best performance of the season and hopefully something that we can build upon. I thought we played really hard, Auburn did too. … Considering the defensive prowess of Auburn, I thought Terry really blossomed. We got great contributions from the bench. All five guys that came in off the bench played incredibly hard. I thought they were connected, and they made winning plays throughout.”

Wednesday’s victory gave Georgia (11-3, 1-0 SEC) its first win against an opponent in the Associated Press Top 25 since defeating No. 18 Memphis on Dec. 1, 2021. The Bulldogs also notched their first victory over a ranked conference opponent in two seasons, previously beating No. 20 Missouri at home on Feb. 16, 2021.

Georgia opened the game by rattling off five straight points by way of a Roberts layup and an Oquendo 3-pointer. The first few minutes were highlighted by Moncrieffe getting a lob to Roberts who connected on the thunderous dunk to give Georgia an 11-10 lead at the first media timeout.

Out of the break, the Bulldogs went on a 10-0 run to create a 21-10 advantage. Junior Jabri Abdur-Rahim accounted for six of the 10 points, sinking a 3-point shot and converting three free throws. The Red and Black limited Auburn’s possessions as well by getting into passing lanes to intercept passes. The Bulldogs had four steals in the first 12 minutes, two of which came from fifth-year Braelen Bridges on his way to an eventual career high of three.

After Georgia took an 11-point lead, Auburn responded with a run of its own. With the score tied up at 21, Roberts drew a foul while driving to the basket and sank both ensuing free throws. The Tigers found their first lead of the day on an Allen Flanigan jumper, but it was short-lived as Roberts got to the basket and put in a layup just 14 seconds later.

Roberts’ free throws sparked yet another 10-0 run for the Bulldogs, who took a 38-30 lead into the locker room. Roberts led all scorers with 13 points, shooting 5-of-10 from the field and notching a pair of steals. Just behind him was Oquendo, who had 10 points with two 3-pointers.

Oquendo picked up right where he left off in the first half, opening the second half for Georgia offensively with a driving layup and another long ball. Auburn responded with a five-point swing in consecutive possessions, cutting down what was a nine-point lead for the Bulldogs to just four, forcing Coach White to take his first timeout of the half. The squads would continue to trade buckets over the following five minutes, with Georgia holding a 51-45 advantage at the under-12 timeout.

After giving up consecutive baskets, the Bulldogs controlled possession leading by just four points. Roberts took a screen and made his move to attack the basket, where he made a pass to an open Justin Hill in the corner who splashed the three-ball. Following a defensive stop, Bridges was able to convert an offensive rebound into a second-chance layup, giving Georgia a 62-53 lead with 6:41 remaining as Auburn took its first timeout of the half.

The Bulldogs forced a missed 3-pointer from Wendell Green Jr., as the team then pushed the pace and got Roberts to the rim for a transition layup. Following the bucket, Roberts snatched his third steal of the day, getting fouled and converting the free throws to give the Red and Black a 66-53 lead, its largest of the game.

Auburn continued fighting, getting buckets at the rim, and creating missed shots for Georgia. The Tigers began to make the Bulldogs uncomfortable in their full-court press and created a scoring drought for Georgia that would last over three minutes. However, the Bulldogs’ lead proved to be too large as they clinched their first conference win of the season.

Georgia will hit the road for its next game as the Bulldogs continue SEC play at Florida on Jan. 7 at 1 p.m. ET in Exectech Arena at the Stephen O’Connell Center in Gainesville. Both the Gators and Bulldogs are in their first seasons with new head coaches, as UF coach Todd Golden came to Gainesville in the offseason after leading the San Francisco Dons’ program for three seasons.

• Series History – Today’s game marked the 196th meeting between the Bulldogs and Tigers – Auburn leads Georgia 99-96. The Bulldogs are 62-29 when taking on the Tigers in Stegeman Colesium.

• The Auburn Effect – Oquendo has thrived against the Auburn Tigers, averaging 21 points per game while shooting 54 percent from the field (15-of-28) and grabbing 4.5 rebounds per game.

• Magnificent Moncrieffe – Matthew-Alexander Moncrieffe logged a season high 31 minutes, along with a season high nine boards and three assists.
• The Painters – The Bulldogs outscored the Tigers, 36-28, in the paint on the evening.

Opening Statement
“A big win for this team and our program to get started. Off to a 1-0 start against a high-level program and high-level team in Auburn. Obviously, our best performance of the season and hopefully something that we can build upon. I thought we played really hard, Auburn did too. We got away with their 21 offensive rebounds. One of the biggest keys to the game… one of the top two or three keys we discussed ad nauseam the last few days. It’s easier said than done. I thought (Johni) Broome was phenomenal on the offensive glass. They just attack you in so many different spots with size, athleticism and tenacity. Their ball pressure and disruption defensively was a big factor as well. I thought Terry Roberts played fantastic. He played with poise, he made good decisions. Considering the defensive prowess of Auburn I thought Terry really blossomed. We got great contributions from the bench. All five guys that came in off of the bench played incredibly hard. I thought they were connected and they made winning plays throughout.”

On Terry Roberts…
Confidence. Poise. The game was slow for him, as it does with most point guards. Surprisingly it happened in his first SEC game as opposed to his second or third. Hopefully again, there isn’t a step backward. For him, he played really well. That was a high-level point guard game in this league against a high-level defense. Hopefully, he has a few more of those in him. Confidence. Swagger. He led us. He had command. He got
us in spots. He made plays in transition. He got to the rim.”

On returning to Gainesville this weekend…
“Business, that’s it. Gainesville’s a place I love. I’ve got five kids that were raised in Gainesville for seven years, and the second half of their development will—Lord willing—be in Athens. But it’s a special place. It’s a place that Kira and myself and our kids, we love and had a great time there. I’ll always be appreciative. I’m looking forward to seeing some family and some friends—I really am, just being honest with you. A lot of people in those stands I’m anxious to see, people I care about, people throughout the community and so on. With that said, when shootaround’s going on, I’m going to be locked in and I expect our guys to be locked in. I’ve got to model it for them. When that thing’s tipped, we’re going down there to see if we can get better and put ourselves in a position to steal one on the road. That’s the name of the game in this league.”

On tonight’s win...
“It took a lot of physicality and mental toughness. They’re a really good team, a really physical team. As you saw in the first three minutes, I think they got five “O” boards. That was our focus coming into this week – matching that physicality and intensity. That’s what we had to do to win this one.”

On opening conference play with a win…
“It does a lot. I think we knew we were capable of this. I don’t think a lot of people outside of here knew. It just gives us a big boost going forward and helps out confidence going into the next one knowing that we were able to do this. We just have to carry out going forward.”

On the first SEC win…
“It felt great. Coming in here to the SEC and getting our first win, it felt good.”

On his performance…
“I have to give my teammates a lot of credit. They executed the way we were supposed to, and and somehow I just found the ball in the rim.”

On responding to Auburn’s runs during the game…
“Staying in the next play. Don’t even worry about what happened in this play. If they scored this play, we have to stop them next time. I think that helps us a lot for sure.”

On the postgame locker room message…
“It was exciting, but we have to move on to the next one. We have a big one upcoming on Saturday, so we have to get ready for that one, for sure.”