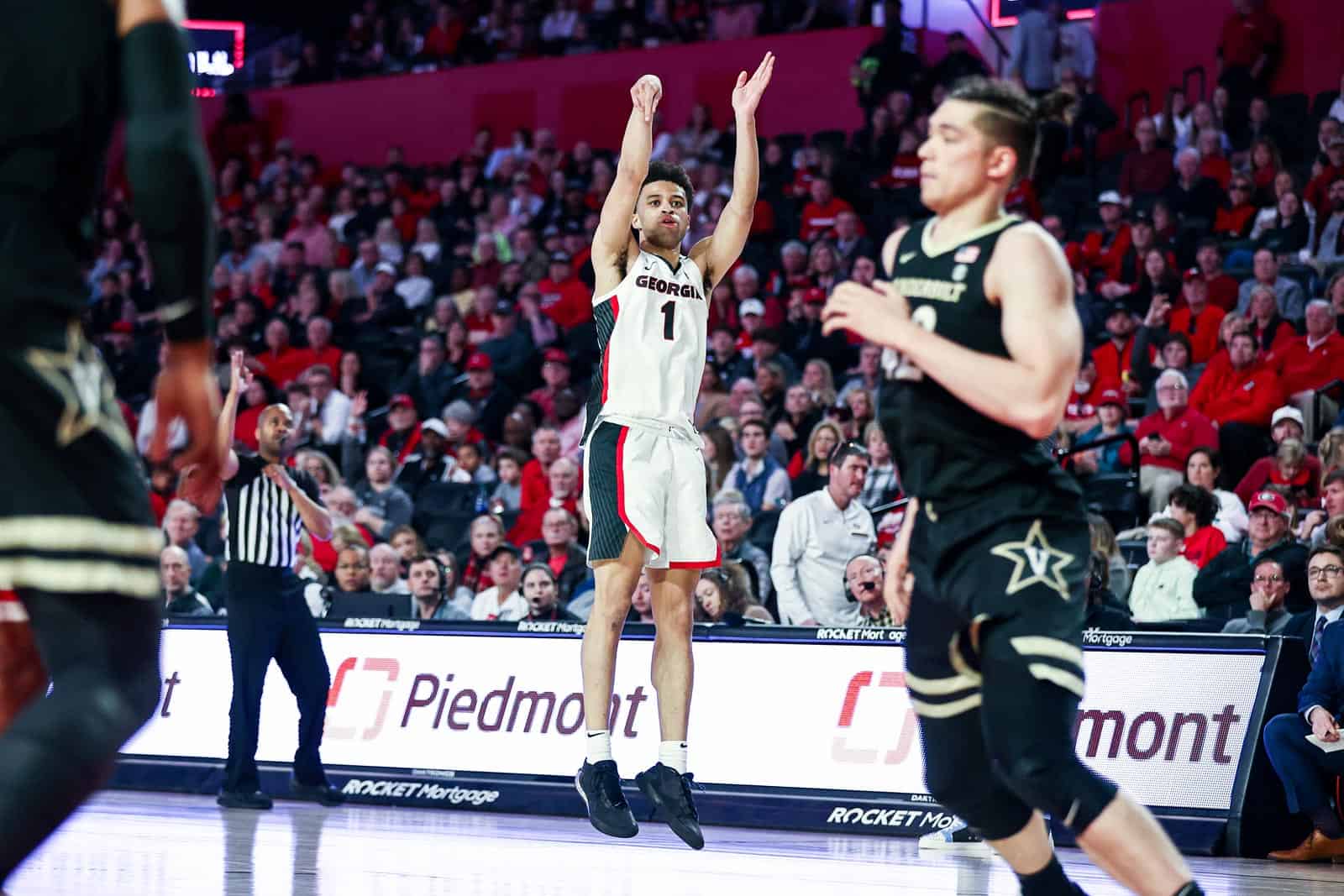 ATHENS, Ga. — The University of Georgia men’s basketball team came up just shy of a win during its comeback attempt against Vanderbilt, losing 85-82 before a sellout crowd of 10,523 inside Stegeman Coliseum Saturday afternoon.

“A tough one, a tough one, but credit to Vanderbilt, Coach (Jerry) Stackhouse and staff, I thought they were terrific,” said Georgia head coach Mike White following the game. “10-of-21 from the 3-point line gives you a chance on the road. … I thought our press and our pressure late were a factor giving us a chance to play down and transition, but the way they shot it from three, the way they executed, especially with a lead. And they have got some adversity they are dealing with, so it was a great performance by those guys. I am not going to sit here and tell you everything we did wrong. We played an SEC game against a good team; we didn’t play well enough.”

After jumping out to an early 8-5 lead thanks to a dunk from Frank Anslem, the Bulldogs fell behind and allowed Vanderbilt to take the lead. The Commodores would go on a 10-point run, which included two of their eight first-half 3-pointers, leading 15-8 with just under 14 minutes to play in the half.

Georgia would trail for most of the opening frame before a five-point swing put the Bulldogs down just two, 30-28. A dunk from Anslem and a trey from Abdur-Rahim put the Bulldogs within striking distance and it would take advantage. Abdur-Rahim and Mardrez McBride each cashed in a 3-pointer and tied the game at 36 with just over two minutes remaining. However, Vanderbilt would end the half on an 8-0 run, claiming a 44-36 lead heading into the halftime break.

The teams would open the second half trading baskets, with Georgia getting the lead down to three following a 4-point play from Abdur-Rahim. Yet once again, Vanderbilt ballooned its lead back to nine by the next media timeout. After again shrinking the deficit to three, a technical foul called on White sparked an 8-0 Commodore run and a game-high 12-point lead.

Georgia again went on a run, rattling off 11 unanswered over the next four minutes. Roberts made it a one-point game with 2:13 remaining, but Vanderbilt kept Georgia at bay with consistent free throw makes. With four seconds to go and down three, Abdur-Rahim was able to get off a shot, but it hit off the rim and sealed the Bulldogs’ first home loss of the season.

Georgia will play its next game on the road, visiting No. 9 Tennessee this Tuesday at 7 p.m. ET inside Thompson-Boling Arena in Knoxville. The contest will be the second time the Bulldogs have faced a ranked opponent this season and the first time playing one away from its home court.

• Jabri for Three – Abdur-Rahim tied his career high in 3-point attempts made on the afternoon. The junior went 5-for-8 en route to posting a career-high 21 points.

• Terrific Terry – With his six assists on the afternoon, Roberts surpassed the 200 career assists milestone. The transfer phenom ranks third in the SEC in assists per game with 4.1.

• Backed by the Bench – The Bulldogs’ bench contributed 32 points in today’s matchup. In total, the Georgia bench has totaled 457 points to its opponents 289 for a +168 differential.

Opening Statement
“A tough one, a tough one, but credit to Vanderbilt, Coach (Jerry) Stackhouse and staff, I thought they were terrific.10-of-21 from three gives you a chance on the road, their ball security, good enough to hold on versus a really loud crowd and some defensive energy, but we fought until the bitter end. I though our press and our pressure late were a factor giving us a chance to play down and transition, but the way they shot it from three, the way they executed, especially with a lead. And they have got some adversity they are dealing with, so it was a great performance by those guys. I am not going to sit here and tell you everything we did wrong. We played an SEC game against a good team; we didn’t play well enough. I thought they got most of the loose balls, our attention to detail defensively failed us a few times, especially with Myles Stute being one of the best shooters in the country. We weren’t good enough, unfortunately we had a great opportunity at home to bounce back after a really poor second half the other day. I thought I saw a lot of the same type of stuff, and I didn’t do a good enough job preparing these guys. We only gave up eight offensive rebounds, but (Quentin) Millora-Brown got six of them. Our wall-up, discipline, our physicality at the rim wasn’t what it needed to be to be competitive. And we have been really good defensively, but we weren’t sharp enough defensively, we weren’t connected enough to beat a team in this caliber and this league. Tough loss for us.”

On the crowd and Vanderbilt responding…
“It got really loud in there a few times and we’re really appreciative. I never want to sit here and talk to our fans a bunch because we have our work cut out for us. I preach to our guys all the time about the exterior noise and let’s focus on what we need to focus on. I will say I’m disappointed for our fans because they came out and our guys earned the right. Our guys have worked and we’ve had some wins, we got a streak at home. I credit our guys because we’ve squeaked out some close ones and our guys have really worked hard. I’m disappointed for our guys and I’m disappointed for our fans. I hope that they’ll come back and continue to support us because it was rocking in there. It was a fun environment and I wish, obviously, that they were rewarded with a W, but Vanderbilt was just better than we were today.”

On Jabri Abdur-Rahim’s development…
“Really pleased, I meet with him yesterday or the day before. But here as of late, since the Kentucky game and gave some of those guys feedback. He’s got a ways to go, all of these guys have a ways to go, I have a ways to go. Our program is built on growth on the court and off the court. He’s come a long way, he’s arguably since the first practice our most improved player. His attitude has been really good. His work ethic…He’s become a lot better defensively. Has become a good teammate and is playing with a lot of confidence. I’m happy for him.”

On the post game message to the team…
“It’s an opportunity we can take advantage of. We didn’t quite respond to the second half the way that we could have. It’s not the win or the loss, it’s not the outcome, and I’m a big believer in that. Let’s control what we can control, let’s stay in the moment, let’s focus on the details of the game, playing off of two feet, making the extra pass, running to the corner. It’s a split-second game and we have hundreds and thousands of split-second jobs and responsibilities throughout the game. And defensively we just weren’t quite as sharp as we’ve been, especially at home. As a head coach you think about all the things you could’ve done better. They were good.”

On what was working for the team…
“Offensively, there was never a problem. We just couldn’t get anything done on the defensive end. We made a bunch of big shots, but every time we made a big shot, they made a big one to come right back at us. They probably led the whole game. We just could not get it going, defensively. Offensively, we felt fine. We were focused on offense. We were trying to get stops the whole time. We knew that offense would take care of itself. That is really what it came down to. We just couldn’t get enough stops.”

On continuing to battle throughout the game…
“We are just frustrated in ourselves. We know we are better than that, defensively. We work so hard on it every day. For them to put up however many points they put up and for us to not come up with some big key stops that we need, we were playing so well offensively, it is disappointing. It was tough. Credit to them. They are a really good team. They run really good stuff, and they have really good players.”

On the message in the locker room postgame…
“We just have to be better. We tried to respond after the Kentucky loss. We didn’t do the things that we talked about with the game plan. We knew going into the game that they had really good shooters. They probably shot close to 50 percent from the three. We just didn’t do a good job of doing what the coaches asked. That is on us. We have to be better. The good thing about basketball is that we have another one on Wednesday against a really good team. We are going to go look at the film and go hard in practice to get ready for Tennessee.”

On early foul trouble…
“I was still alright. I wasn’t too worried, but I was trying to be conscious about where we were and the way the refs were calling the game. I wasn’t trying to be overly aggressive.”

On the first loss at home this season…
“We knew what to do, and we just didn’t do it. It’s frustrating. We put a lot of work in, and we just have to show it out there.”