Georgia falls at Kentucky despite strong first half

Georgia falls at Kentucky despite strong first half 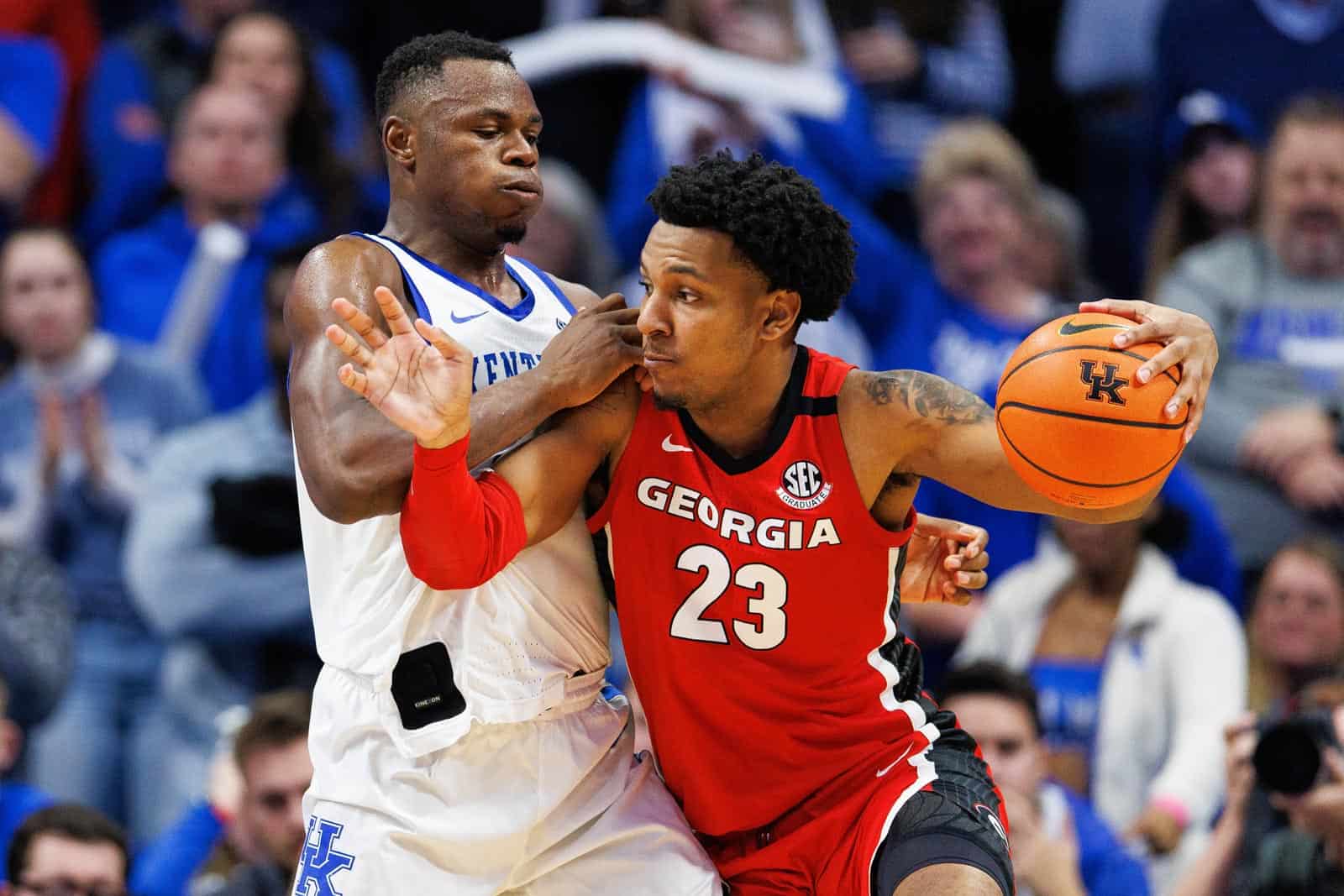 LEXINGTON, Ky. — The Georgia men’s basketball team lost its second conference game of the season against the Kentucky Wildcats, 85-71, on Tuesday evening in front of 19,171 spectators at Rupp Arena, despite 21 points from Terry Roberts.

“Kentucky just dominated the glass, 44-31,” said head coach Mike White. “Our best offensive category is the offensive glass, and we had couple guys get one each, and Oscar [Tshiebwe] gets 11 and they get 16. Their strength dominated our strength, and we have to be much better than that in the future. Our energy level early in the second half didn’t match our first half effort, and that’s on me.”

The Bulldogs jumped out to a 7-2 lead in the first three minutes and kept itself in front through the first media timeout of the night, when a steal from Roberts led to a Matthew-Alexander Moncrieffe layup for a 9-5 advantage. The Wildcats narrowed the lead to just one at the under-12 break.

Justin Hill connected with Abdur-Rahim after Kentucky took a one-point lead, this time on a baseline out-of-bounds pass for a 3-pointer in the corner to push the Red and Black ahead 16-14. After Roberts handed the ball off to Bridges, the senior then waited for Jaylin Ingram to get around a screen to break free and for a 3-pointer to create a 25-18 lead with just over seven minutes to go in the half.

Roberts continued leading the offense for Georgia, knocking down another tray and giving the team a 36-25 advantage. The senior would go on to lead the Bulldogs in scoring in the opening frame with 13 points on 5-of-8 shooting, helping give the team a 42-34 lead at halftime. Abdur-Rahim and Oquendo added seven points each as the team shot 56% from the field in the first 20 minutes.

Kentucky managed to erase Georgia’s lead in just under two minutes into the half. The Wildcats went on a 7-0 scoring run, which was capitalized by a C.J. Fredrick 3-pointer that forced Coach White to call a timeout. This marked the first lead for the Wildcats since 11:04 in the first half when they were in front 14-13.

Abdur-Rahim broke the scoring drought for the Bulldogs when he managed to pull up from the extended elbow and make a jump shot. The Wildcats were continuously applying offensive pressure, though, and continued a 19-5 scoring run that began with just 22 seconds in the first half. The Red and Black found itself behind, 50-47, at the first media timeout of the half.

Roberts put down his third triple of the night on a step-back that left him wide open and cut the deficit to just one. The Bulldogs would go on to tie the game up at 55-all on a fast break where Roberts let the defense close in on him in the corner before passing back out to Hill for 3-ball with 12:38 to go. From there, Kentucky went on another scoring run to create a 67-60 advantage heading into the under-eight timeout.

After a miss in the corner from Fredrick, Oquendo got the defensive rebound and took in the length of the floor to put down a thunderous dunk over Antonio Reeves and cut the deficit to six with just over five minutes remaining. The Bulldogs would be unable to pull the score any closer throughout the remainder of the contest, though, and the team would eventually lose the game by 14 points.

The Bulldogs will return to Stegeman Coliseum this Saturday afternoon to take on the Vanderbilt Commodores at 1 p.m. ET. Georgia holds a 47-42 record at home against Vandy.