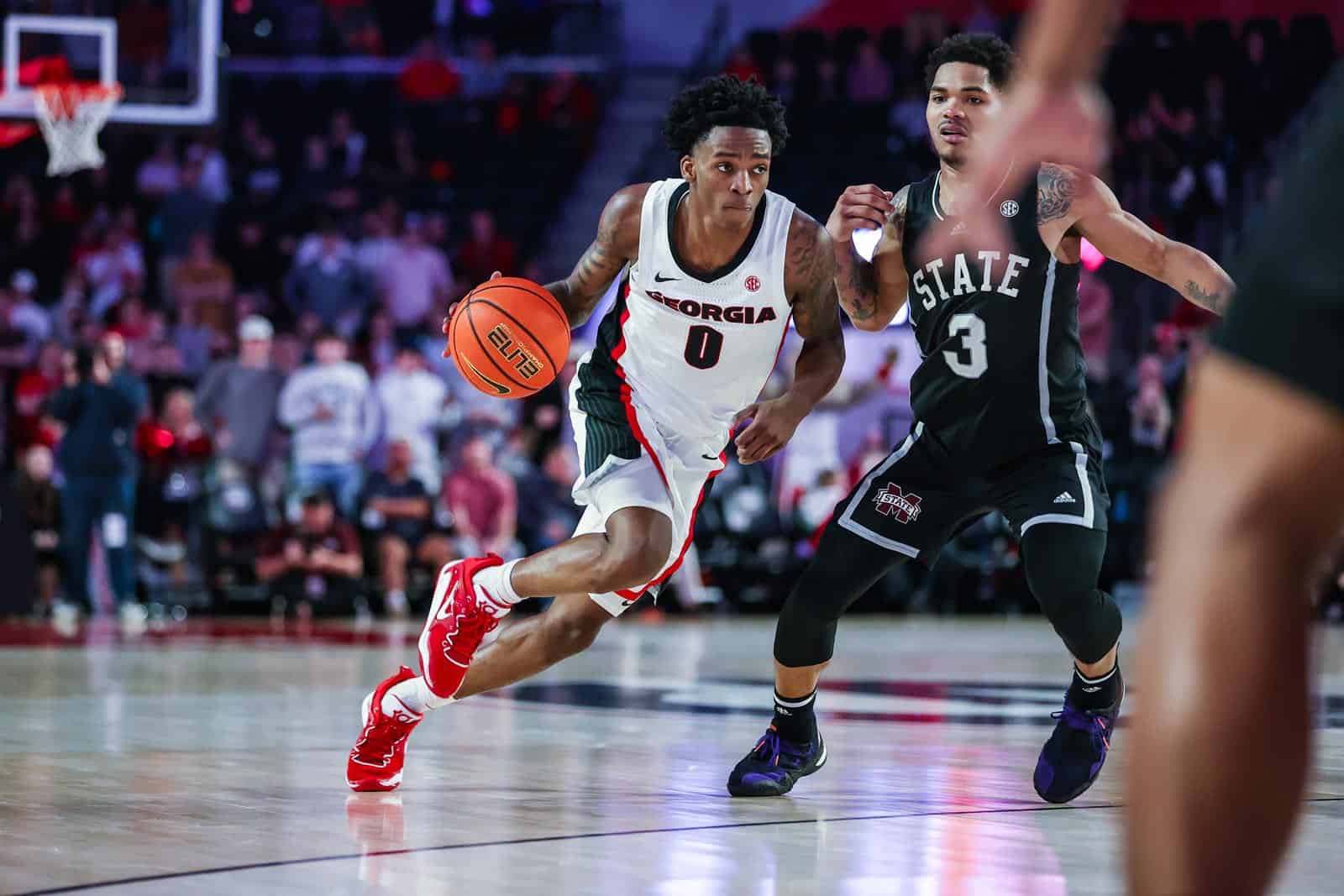 ATHENS, Ga. — The University of Georgia men’s basketball team picked up its second Southeastern Conference win of the season with a 58-50 win over Mississippi State Wednesday evening before 7,741 spectators inside Stegeman Coliseum.

Senior Terry Roberts led all scorers in the contest with 16 points, along with three rebounds and three assists. Four Bulldogs also scored in double-figures, including fifth-year Braelen Bridges, who with 11 points, became the 49th player in program history to reach 1,000 career points.

“Good win. What a weird game,” said head coach Mike White. “My goodness, two really good teams that struggled to get going offensively. They are one of the best defensive teams in the country. We really guarded at a high clip tonight. We got some stops down the stretch when needed. I thought our bench was really good. … I am thankful to the crowd that came out. I thought they were a really big factor in the win, especially defensively late in the game. Mississippi State is very, very good. Every team in this league is. We take every one that we can get. This is a good win for us.”

Georgia (12-4, 2-1 SEC) came out imposing their will defensively, holding Mississippi State (12-4, 1-3 SEC) to just 1-of-7 shooting heading into the first media timeout. Despite limiting the opposition to just one made basket, UGA had trouble converting its opportunities, turning the ball over four times in the early minutes. After taking an initial 5-2 lead, UGA went over seven minutes before its next field goal.

Georgia reclaimed its lead when Roberts found an open Jusaun Holt for a three, followed shortly by a three of his own in the corner. Mississippi State put itself back front, 19-18, off a pair of triples with two minutes remaining in the half, but a pair of Georgia makes at the line gave it a 20-19 lead heading into halftime. Despite 10 turnovers and only five field goals, UGA’s defense held MSU to 7-of-32 shooting from the field.

Georgia began the second half against sluggishly on offense, making just two field goals in the first seven minutes of the period. Despite the drought, Roberts again put the Bulldogs ahead at the under-12 timeout with a driving layup. Mississippi State again moved in front, 34-30, kickstarting a back-and-forth sequence that saw junior Justin Hill make two critical 3-pointers to regain the Georgia lead each time.

Following a Georgia timeout, Roberts found a cutting Matthew-Alexander Moncrieffe for a dunk that gave the Bulldogs the lead for good. Down three in the final 90 seconds, Mississippi State missed a potential tying three, allowing junior Jabri Abdur-Rahim to convert both free throws and pad the lead. After one last MSU dunk, Bridges clinched the game with a pair of makes while also reaching the 1,000-point mark in his career.

Georgia continues its SEC schedule this Saturday, Jan. 14 against Ole Miss Rebels at 1 p.m. in the The Pavilion in Oxford, Mississippi. The Bulldogs hold a 73-47 all-time advantage over Ole Miss, winning their last game in Oxford, 78-74, on Jan. 16, 2021.

• Streaking – With the win, Georgia extended its home win streak to double digits, becoming just the 6th team tin school history to do so.

• Monumental Moment – With 11 points, Braelen Bridges reached the 1000-point benchmark for his career. He becomes the 49th Bulldog to join the 1000-point club. Bridges also eclipsed 500 rebounds in his career with his 10 boards tonight.

• Finding a Way – Despite shooting below 30 percent from the field, Georgia was able to close out the win tonight. This is only the second time since the 1996-97 season that Georgia has won with a FG percentage below 30.

Opening Statement…
“Good win. What a weird game. My goodness, two really good teams that struggled to get going offensively. They are one of the best defensive teams in the country. We really guarded at a high clip tonight. We got some stops down the stretch when needed. I thought our bench was really good. Jusaun Holt was plus 17. Frank Anselem really defended the glass at a high level I thought did pretty good offensively. Justin Hill was arguably as effective for us offensively as anyone with some timely shots. It was a gritty win — a hard-fought win. Two teams that I thought played really hard. We did a great job, despite them getting 14 offensive rebounds. I think that number is a little bit misleading because they missed a bunch of free throws. Thank God for us. They missed a few from the field and gave us opportunities. That 14-0 could have been a lot higher. They are one of the best offensive rebound teams in the country. Obviously, they are one of the best teams in the country turning you over. I want to say top five in the country if I am not mistaken. We get 18 there, so we have to continue to improve. I am thankful to the crowd that came out. I thought they were a really big factor in the win, especially defensively late in the game. Mississippi State is very, very good. Every team in this league is. We take every one that we can get. This is a good win for us.”

On playing at home versus on the road…
“Connection, we’re connected at home. Our crowd is a factor, especially late in the game defensively for us. I thought it got really loud, and I thought that our crowd was a factor down the stretch in helping us get stops. You’re fighting that on the road in this league. Every environment in this league is tough to play in and to have success against, especially offensively. We had a game the other night that we couldn’t get a goal
offensively, of course we had another one earlier in the season where we actually played well offensively but couldn’t get a stop. So we’ll have to continue to search, and we’ll have plenty of opportunities in this league but they’ll all be very tough.”

On building a program and finding ways to win…
“It’s really big. It’s really big. We talked postgame in the locker room that it’s a step. A step for us is winning a hard-fought, physical, tough-nose, gritty game versus a team that just gets after you and who has had a lot of success. When you don’t play great offensively, and they had 90% to do with that, they are terrific offensively. We played really well against Auburn. This was a different performance for our guys, so that’s a step
in the right direction not only for this team but for our program. The next step is to at some point break through on the road.”

On tonight’s game…
“We knew it was going to be a hard-fought game from the jump. Coach said to hit first, and one thing coming into the game for us was that we knew they wanted to impose their will on teams and be physical. We knew we had to be physical in order for us to win.”

On outrebounding Mississippi State…
“I think we won it [rebounding battle] like 47-39, but I feel like we accepted the challenge, and everybody stepped up and hit their man to rebound it.”

On the free-throw shooting down the stretch…
“We shoot free throws every day, and if we don’t make 80%, we run. That’s a big thing for us. It’s a big key.”

On reaching 100 games for Georgia and 1000 points and 500 rebounds in his career…
“It’s a blessing. All the hard work that I put into this program is paying off. I’m taking it one day at a time. All Glory to God.”

On his go-ahead buckets tonight…
“I feel like I can make the decision that is best at the time, so if I see an open teammate I’ll pass it, but if I see an open lane, I’ll try the defender. It’s just decisions.”

On limiting Mississippi State’s chances and closing down shots…
“It’s just rotating. They are a pretty good defensive team, and I think we are, too. When a shot went up, I feel like we had to just block out, grab it, and win the possession.”

On the crowd at Stegeman Coliseum…
“The crowd was crazy. I’ve never been in an environment like this. To see all of them out here, especially after what football just did, I loved it.”