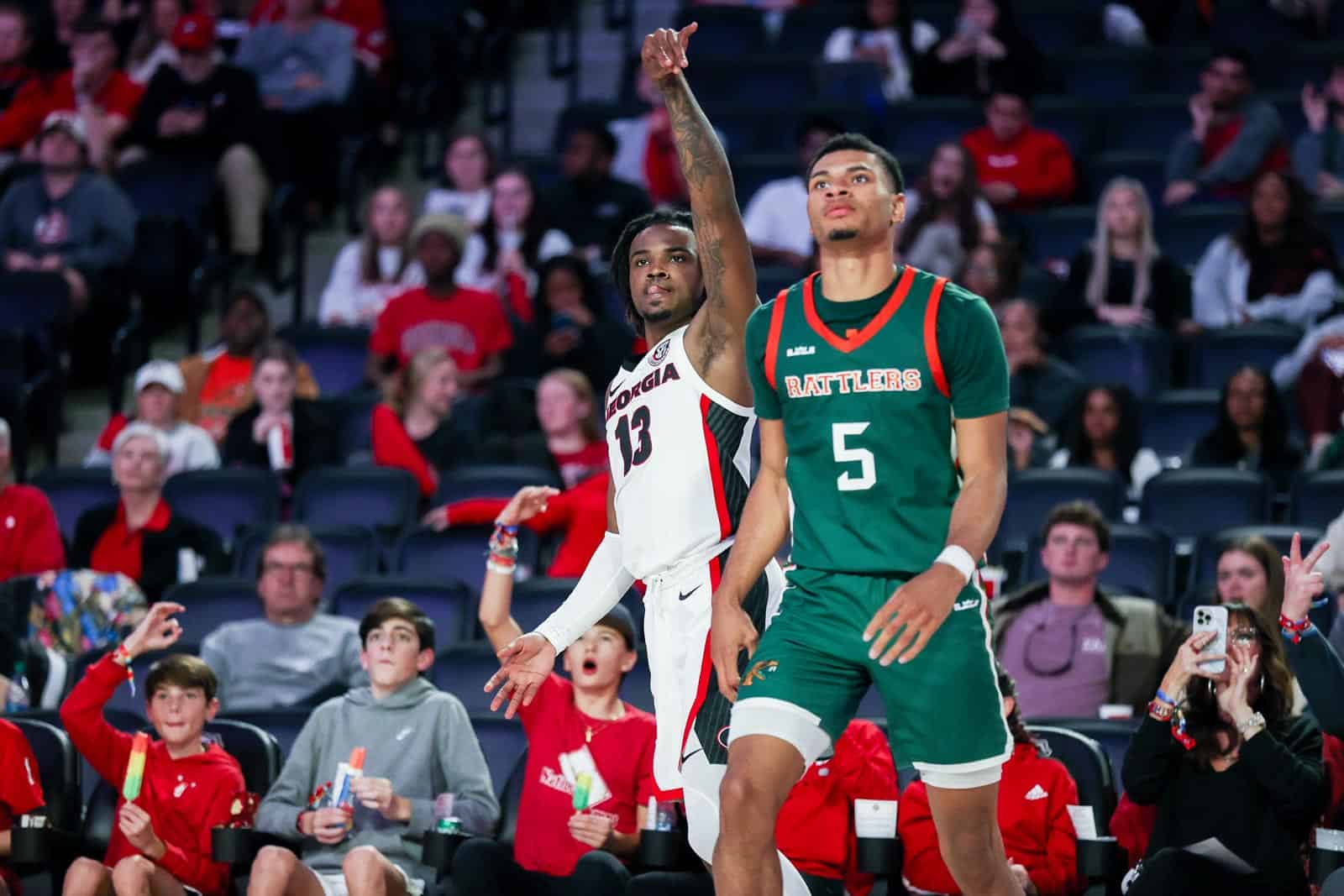 ATHENS, Ga. — The University of Georgia men’s basketball team played stellar defense and won the rebounding battle to pick up a victory against the Florida A&M Rattlers, 68-46, elevating head coach Mike White to the 250th win of his coaching career on Friday evening in Stegeman Coliseum as witnessed by 6,673 spectators.

By holding FAMU (1-6) to just 46 points, it marked the first three-game stretch for Georgia (7-2) holding opponents under 55 since December 2010. Mardrez McBride finished with his most points in a Bulldog uniform (15) and a career-high in both rebounds (9) and steals (4). Jabri Abdur-Rahim had his season-best in scoring as well with 14 on 3-of-5 shooting from three, while Braelen Bridges finished with 10 points and eight rebounds. The Bulldogs led in rebounding by a 40-28 margin.

“Drez [Mardrez McBride] I thought was really good, getting nine rebounds, that’s effort, that’s 6-foot-2, 6-foot-3 with career high in rebounds when we really needed it, you got to respect that fight,” said Coach White. “Overall, I thought we played hard and defended pretty well. In a game where you got four guys out, two of whom you realize a couple hours before the game they are not playing and four guys that are potential starters for this team. I liked how hard we played; we have a lot to clean up, but I liked how hard we played.”

Bridges picked up right where he left off after a career outing on Wednesday by giving the Bulldogs their first two baskets of the night off post-ups. KyeRon Lindsay added to Georgia’s early scoring total, but a pair of turnovers allowed the Rattlers to cut the early lead to 6-4 while maintaining possession of the ball heading into the first media timeout of the night.

Turnovers began to stack up for Georgia, as FAMU took its only lead of the night after a giveaway allowed Jordan Chatman to put in a layup. The home team then quickly responded after McBride found Abdur-Rahim beyond the arc for the team’s first 3-pointer of the evening. A McBride layup extended the Red and Black’s lead, 13-10.

Bridges flashed his impressive passing vision as the fifth year passed out of a double team from the block to Abdur-Rahim on the opposite wing, converting on his second long ball of the night just under the midway point of the first half. Bridges earned his second assist of the night by finding Jaxon Etter as he put in a layup of his own and Georgia extended its lead, 26-15.

Lindsay showed off his offensive game with around three and a half minutes to go in the opening frame, using a jab step into a spin move to get to the rim and find his third bucket of the night. The freshman finished the half with six points as Georgia took a 34-23 lead into the halftime break, thanks in large part to a 21-12 advantage on the glass. Bridges led the team in both scoring with 10 and rebounding with seven in the first half.

McBride kickstarted the Georgia offense in the second half after Justin Hill found the fifth-year senior in the corner in transition for a 3-pointer. Shortly thereafter, the Bulldogs went on a seven-minute field goal drought that was ended by Abdur-Rahim on an and-one layup. During that time, FAMU went on an 8-1 run, leaving it trailing, 46-35, after the free throw make.

A pair of threes from McBride before the under-eight timeout gave Georgia a 52-38 lead as the Augusta native upped his scoring total to 13. Jaylin Ingram found his first bucket of the night of a set out-of-bounds play that found him cutting to the rim for a layup. Ingram finished with two points, three rebounds, two assists and a steal in his third game back from last year’s season-ending injury.

With just under two and a half minutes to go, Georgia swung the ball around the arc and found McBride, who was able to find enough space to sink a jumper right before the final media timeout of the game. The Bulldogs would finish the game with a stout defensive effort to win by a 68-46 score.

Georgia’s upcoming rivalry game against Georgia Tech at McCamish Pavilion will mark its second true road game of the season. Tip-off is slated for 7 p.m. ET in front of a national audience and will air on ESPN2. The Bulldogs are 91-106 all-time, but have won five of the last six contests against the Yellowjackets.

• Dominant Defense – The last time Georgia held opponents to 55 for fewer points in three-consecutive games was Dec. 21, 23 and 28 of 2010 against High Point, Mercer and Charleston Southern. The Bulldogs set a new season-low by allowing 46 points from Florida A&M, after holding Hampton to 54 on Wednesday and ETSU to 47 on Sunday.

• Bulldog Bandits – The Bulldogs posted a season-high 13 steals. The previous high was nine against Wake Forest on Nov. 11.

• Sharp Shooters – Jabri Abdur-Rahim and Mardrez McBride are two of four Bulldogs to hit three or more 3-pointers in a game this season (Justin Hill and Kario Oquendo). This marked their second performance of the season where they tallied three or more triples.

• Off the Bench – On the season, the Bulldogs bench has tallied 237 points and has posted a +148 scoring margin over its opponents bench players.

• Our Ball – The last time Georgia had three players with eight or more rebounds in a game was on Dec. 4, 2019 against NC Central.

• Block Party – The Bulldogs tied their season-high with six blocks on the evening; Braelen Bridges led the way with three.

Opening Statement
“Florida A&M has played an incredible difficult schedule, I admire the effort they played with and the fight. Having a chance really mid second half, got off to a slow start early second half, our energy level really wasn’t quite what it needed to be, but I thought FAMU had a lot to do with that. We defended well throughout the game, offensively, got a ways to go. Especially with our ball security and execution, decisions, you name it, we’ve got a ways to go offensively. But part of that is the fact that we are playing 12 guys. Drez [Mardrez McBride] I thought was really good getting nine rebounds, that’s effort, that’s 6-2, 6-3 career high in rebounds that we really needed it, you got to respect that fight. Overall, I though we played hard and defended pretty well. In a game where you got four guys out, two of whom you realize a couple hours before the game they are not playing and four guys that are potential starters for this team. I liked how hard we played; we have a lot to clean up, but I liked how hard we played.”

On Mardrez McBride…
“We’ve got to play with confidence. It’s become a problem for us, really across the board at times, that we just don’t look as sure about our-selves as you would think we would. He’s a good player. He’s a career 40% guy for threes. He’s cut net downs, he’s won championships, and he played with a little bit of swagger tonight, I like that. His defense in addition, he handled the ball a lot at the point versus their pressure, versus some speed and quickness and them playing from behind and over pressuring at times. He did some good things. You’d like to see Justin Hill get back to playing with some of that swagger he was playing with too. He’s actually fighting an ankle injury as well so he’s not at full strength. Then with Terry out, it was important for those guys to play with some toughness for us.”

On finishing the week 3-0…
“Pretty consistent, especially defensively and on the glass. Studying some of our numbers today, I’m pretty pleased overall. Not only offensive rebounding but the way that we’re blocking out and that we’re gaining rebounding at time and rebounding down with our guards – Drez getting nine tonight. We’re doing some good things, just offensively can we complement that with executing more consistently. Again, we’ve revamped some stuff and tonight you’ve got multiple guys out so let’s try to just add this wrinkle and that wrinkle. In our guy’s defense, we’re adjusting on
the fly but hopefully, we settle in at some point to where our offense can be more competitive for us to help us defensively.”

On recording his 250th win…
“…I don’t really care about that. I’m blessed to be at Georgia, blessed to be coaching. I’d be happy to be an assistant coach. God blessed me with the opportunity to be a head coach and all of a sudden I’m a head coach at some of the most prestigious institutions in the world. Are you kidding me? I love coaching these guys. I’ve coached a lot of really good players, more importantly good people. I coach with great people that I learn from everyday. I love the administration here. It’s been fun. More importantly, this team, these guys, got to seven wins (today). They held
on and fought through some adversity. We got a little bit better in a couple areas, but we have to get a lot better.”

On what the conversation was like with so many players out tonight…
“We didn’t know who was going to be able to play, some guys were shooting around, some guys were trying to battle through stuff, and I think we all just came out with the next man up mentality no matter who was down. Like you said we had a lot of people out, but we got a deep team, and a lot of really good players so nobody was afraid. It came down to a of couple guys being able to get ready to step up.”

On if their deep roster has surprised him at all…
“It doesn’t surprise anybody. Like I said, we have a lot of really good players, and everybody thinks they’re really good and that’s what’s import-ant. They have a lot of confidence, and we believe in each other, and the coaches believe in us, so since we’ve had that, it’s just a recipe for success.”

On Mardrez McBride’s performance in tonight’s game…
“Just unbelievable. He’s just a really, really good shooter, and he stayed confident. He earned this because he works really, really hard and he deserves it for sure.”

On what his transition has been like in his first year at UGA…
“I’m feeling good, every day we come in and go hard. It’s a new team, with new talent, so there’s things we want to accomplish as a team.”

On what he thinks his role with the team has become…
“I just try to do whatever I can to help the team, I try to utilize my versatility. Some days I may have to score, and some days, I may have to lock down people on defense. I wouldn’t say I have a specific role on this team I just want to help anywhere I can.”