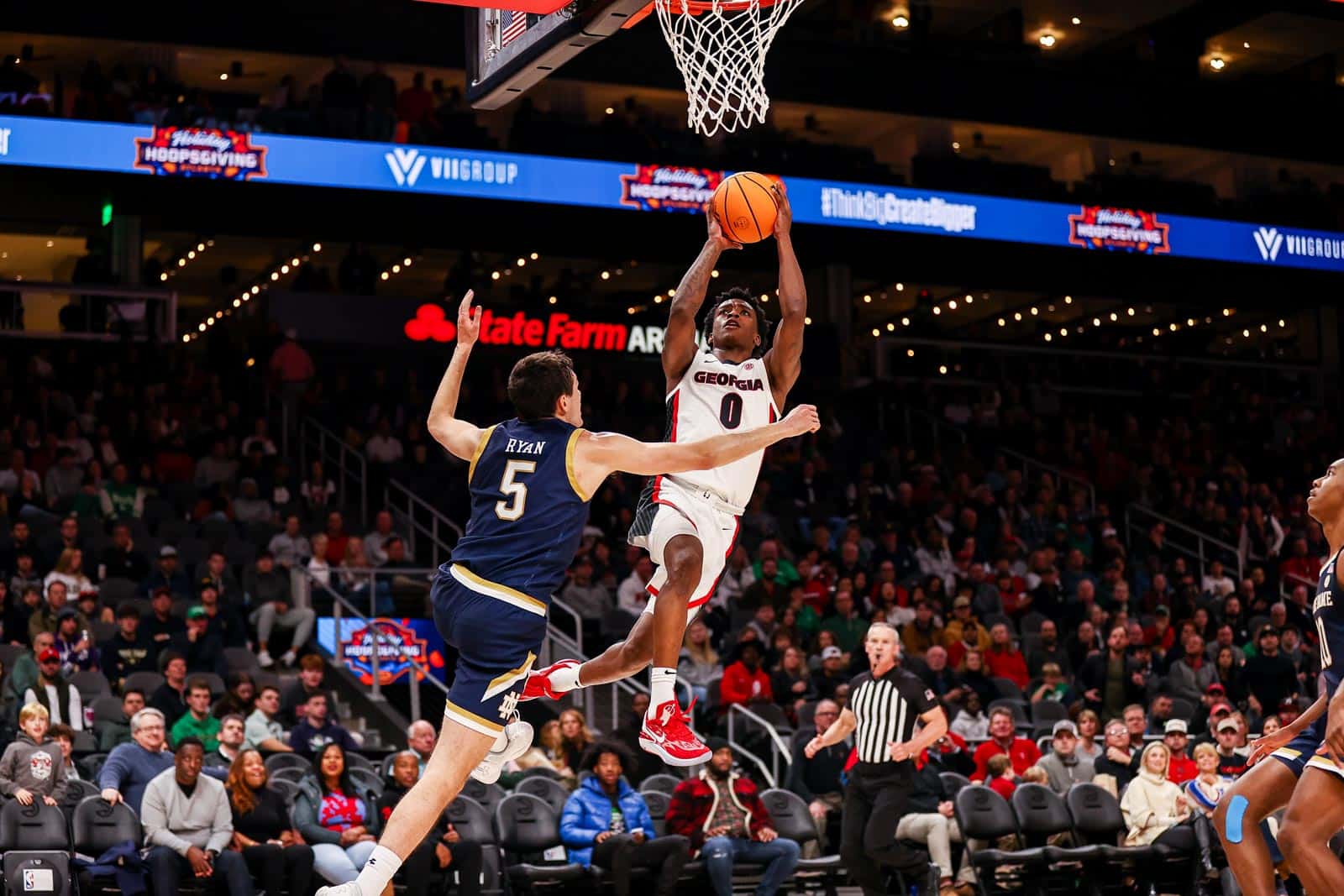 ATLANTA, Ga. – In a dominant performance, the University of Georgia men’s basketball team defeated the Notre Dame Fighting Irish 77-62 in the final game of the Holiday Hoopsgiving tournament on Sunday evening before 3,087 spectators at State Farm Arena.

Fifth-year Braelen Bridges led Georgia (8-3) in scoring with 18 points, shooting a perfect 9-for-9 from the field, while junior Matthew-Alexander Moncrieffe tallied a season-high 15 points on a perfect 6-for-6 shooting. Junior Jabri Abdur-Rahim pitched in with a 12-point, career-high 11-rebound double-double and senior Terry Roberts posted 10 points and five assists. For the evening, the Bulldogs shot 50 percent from the field and outscored the Irish 40-22 in the paint.

“This is by far the best that we have played (this season),” said Georgia head coach Mike White following the game. “We did some really good things in the last one at Georgia Tech down had 11-12 really good days of practice between games. Our preparation has been really good. We had some days off where we could focus on academics, but most importantly we had 14 guys healthy for the first time since practice started. We got contributions from everyone who stepped out there, whether it was offensively or defensively. An extra pass or loose ball… A lot of positivity on the bench. I like the culture and aura. We settled in a little bit offensively, playing interior basketball. Braelen Bridges and MA Moncrieffe go 15-of-15 from the field. You can win a lot of games doing that.”

After a slow start, the Bulldogs and Fighting Irish began to trade baskets. Georgia attacked the paint while Notre Dame (7-4) shot from range. A pair of triples gave the Irish a 13-7 lead at the first media timeout. Coming out of the break, the Bulldogs proceeded to use a 10-5 run to take their first lead of the game, 19-18, with nine minutes remaining in the first half. The two squads went back and forth again over the next six minutes of play.

With three minutes remaining in the half, Georgia found itself with a 34-30 lead, while Notre Dame found itself in foul trouble. The Bulldogs took a 41-36 lead into the locker room. In the first half, Georgia shot 50 percent from the field and went 9-of-11 from the charity stripe.

Coming out of the half, the Bulldogs continued to attack the paint and extended their lead to eight at the first media break. The ensuing six minutes were filled with defensive action as Georgia built its lead to 10. The Fighting Irish quickly cut the Bulldogs’ lead to three thanks to a 7-0 run, however, a corner three from Justin Hill sparked a 9-0 run that gave Georgia a 67-55 lead with five minutes remaining in the game. The Bulldogs would go on to win 77-62

Georgia returns to action on Wednesday, Dec. 21, when the Bulldogs host the Chattanooga Mocs at Stegeman Coliseum. The matchup with the Mocs tips off at 3 p.m. EST and will be aired on SEC Network+.