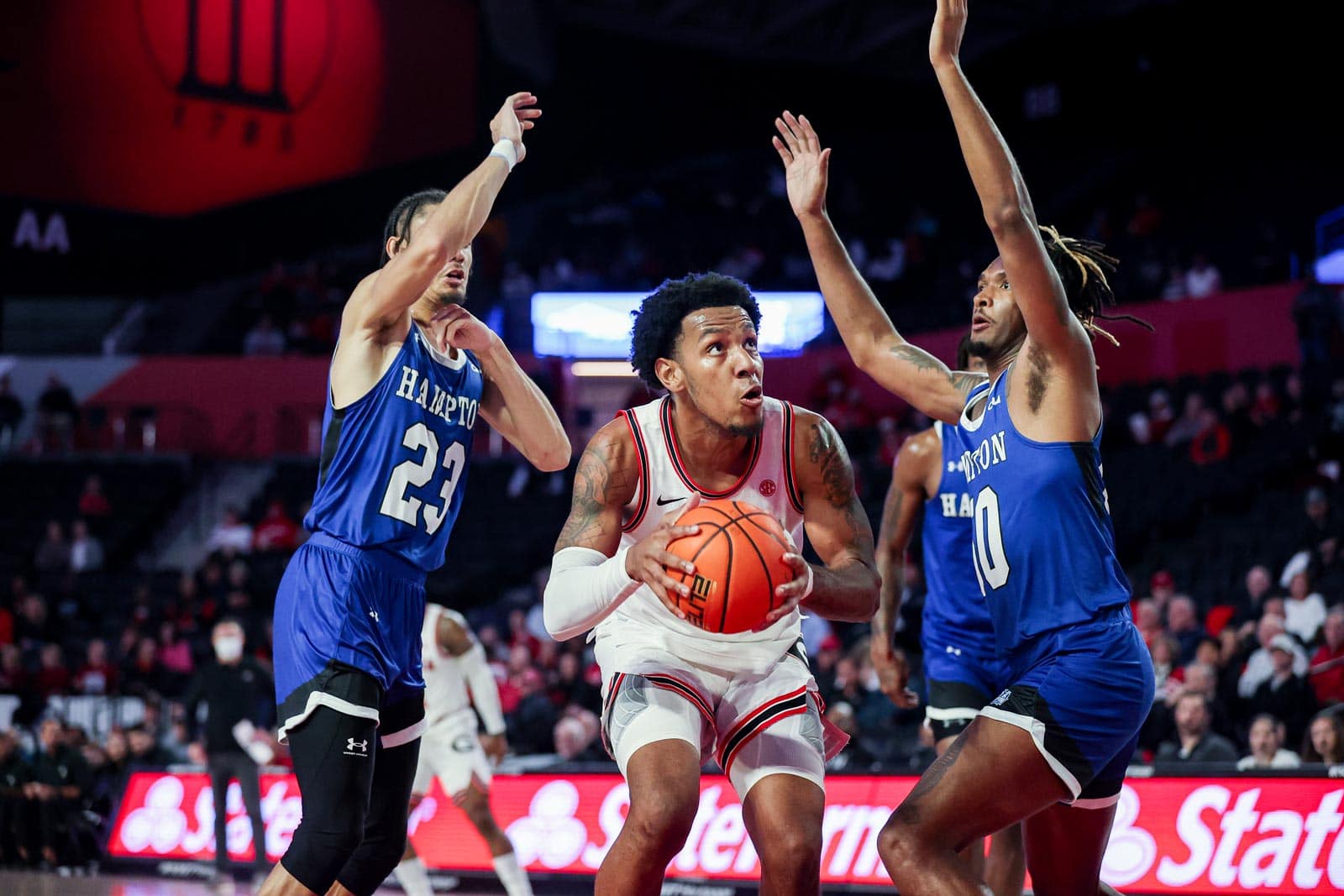 In his first start of the season, Bridges posted his sixth career double-double, finishing with a game-best 21 points, 16 of which came in the second half, and 13 rebounds. Bridges’ 21 points is the second-most scored in his career. Terry Roberts added 16 points, six rebounds and five assists, while Jaylin Ingram had 14 points on 4-of-5 shooting from three-point range.

“A good W,” said head coach Mike White. “I am really proud of Jailyn Ingram, I don’t think anyone in the room, including myself fully understands what he’s been through during his seven-year college career. I mean, he is a completely different player than he was as a young player at FAU [Florida Atlantic University], he’s overcome all kinds of adversity. … He made shots obviously, but defended, I thought he did a really good job defensively for us as well. That was a storyline to the game in my opinion, the second one would be the fact that Braelen [Bridges] really got it going, I thought he was good defensively to compliment his offensive prowess. He had a motor on the offensive glass as well.”

Georgia (6-2) opened by making both of its first two attempts from deep and racing out to an 8-0 lead in the first two minutes. The team’s offense lulled a bit as Hampton (1-6) eased into the contest until Ingram put in his first two 3-pointers of the season, pushing the score to 20-9 just over nine minutes into the half.

Mardrez McBride hit his second-consecutive three with around five minutes remaining in the half to put Georgia up, 31-18. Ingram subsequently went down after a defensive stop, finding his spot on the outside wing and putting down another trey, as the Bulldogs extended their lead to 16.

The Bulldogs remained on fire from deep in the first half, finishing with a season-best eight makes on 14 attempts. Heading into the locker room, Georgia led, 41-26, with nine of its 11 made shots coming off assists. Ingram led all scorers in the opening frame with 11.

The second half started slowly for each team, with both sides combining for nine missed field goals through the first four minutes. Bridges established his presence in the post, earning all six points for Georgia heading into the first media break. His third basket of the half marked a new season-best for him with 12 points.

The scoring drought continued into the midway point of the second half, with neither team making a field goal for over four minutes. Bridges ended the dry spell as he converted on a layup and sent the game to the under-12 media timeout, with Georgia leading by 14.

Coming off a pair of Pirate free throws, Roberts got the ball from the inbounds pass and got the ball to the rack for a layup in just 10 seconds. Just under a minute later, Roberts hit a jumper with time expiring on the shot clock to bring his scoring total up to 15.

Georgia closed out the evening shooting 44 percent from the field, including 10-of-20 from beyond the arc. The Bulldogs nearly led wire-to-wire, taking the lead 25 seconds into play and holding it throughout the evening.

The Bulldogs will conclude their homestand this Friday, Dec. 2 at Stegeman against the Florida A&M Rattlers at 7 p.m. ET. The game will be televised on the SEC Network+. Georgia is 4-0 against FAMU all-time, with each contest coming within the last 20 years.

• Impactful Ingram – In the first half, Jailyn Ingram knocked down a pair of 3-pointers, marking his first baskets since tearing his ACL on Dec. 7, 2021 against Jacksonville.

• Dominant Defense – The last time Georgia held opponents to 55 for fewer points in back-to-back games was Nov. 20 and 25 of 2015 against Murray State and High Point. The Bulldogs held Hampton to 54 tonight after holding ETSU to 47 on Sunday.

• Dawgs on Top – After the Bulldogs took the lead with the opening bucket in the first half, the team never surrendered the lead, a feat the Bulldogs accomplished in their wins over Bucknell and Western Carolina.

• Breakout Braelen – Bridges recorded his second double-double as a Bulldog on 21 points and 13 rebounds, both season highs. His first came against Vanderbilt in last year’s SEC Tournament from a 15-point and 11-rebound effort. The last Bulldog to record a 20+ point, 10+ rebound double-double was Toumani Camara (22 points and 10 boards) against LSU on Feb. 23, 2021.

• Super Charged – Jaxon Etter tallied his seventh charge in six games, upping his total to 37 in 37 games played dating back to the beginning of last season and 45 in the last 48 contests stretching back to the end of his sophomore season.

• Off the Bench – UGA tallied 24 points off of the bench to Hampton’s 18. On the season, the Bulldogs’ bench now has a +138 scoring margin over its opponents bench players.

• Georgia vs The CAA – With the win, Georgia improves to 14-0 versus teams currently competing in the Colonial Athletic Association.

Opening Statement
“A good win. I am really proud of Jailyn Ingram, I don’t think anyone in the room, including myself fully understands what he’s been through during his seven-year college career. I mean, he is a completely different player than he was as a young player at FAU (Florida Atlantic University), he’s overcome all kinds of adversity. So, a great guy, hard worker, I know Lance (Schuemann) and the medical staff have done a good job helping him come back as well. He’s had a great attitude, obviously has not been given much opportunity to this point and just played his butt off. He made shots obviously, but defended, I thought he did a really good job defensively for us as well. That was a storyline to the game in my opinion, the second one would be the fact that Braelen (Bridges) really got it going, I thought he was good defensively to compliment his offensive prowess. He had a motor on the offensive glass as well.”

On Jailyn Ingram…
“He was playing so well that I wanted to play him the rest of the game. He was shooting it and defending. He has a presence out there too. He’s older. He’s got a great basketball IQ. He’s got great instincts. He getting loose balls and playing with physicality. He held up well. 19 minutes was probably a lot for him. I’m sure he’ll feel it tomorrow and I’m sure he’ll sleep well. He deserved all 19 (minutes) for sure.”

On the program after eight games…
“We’ve got a ways to go, a ways to go. We’re getting better in certain areas. Five turnovers in the second half: that’s growth. 14 turnovers against Hampton is just too many. That’s probably 18 in our league. But with that said, Terry (Roberts), Jusaun Holt, Justin Hill: 5-2, 4-0, 6-0, that’s growth in our back court. Braelen (Bridges) had a couple balls slapped out of his hands. Our ball security has to continue to improve, our excecution, our setting and using of ball screens. If we don’t get better in those areas then we have to run different stuff. We’ve already morphed a couple different times, taken a couple right and left turns offensively. We didn’t get as many offensive rebounds tonight but we made more shots…There’s all kinds of stuff that we could improve upon, but there’s some positives as well. We’re definitely a better team than we were a month ago.”

On the depth of the team…
“Depth, parody, healthy competition. You know, we’re even deeper now than we were when we were sitting in here a few days ago with J.I. doing what he did. We’ve got 12 guys. The question is if you’re going to get it to eight or nine if that’s overly important to you. It would probably speed up the level of offensive identity but also defensive identity and role identification. It’s easier to know who’s getting which shots, when and where, and what you’re running when you’re playing seven or eight guys. I don’t know if that’s in this team’s best interest, but I don’t know that playing 12 is in our team’s best interest either. So, it’ll be a daily conversation, we’ve probably spent too much time talking about in our staff meetings.”

On his movement in the paint tonight…
“Obviously, I had it going tonight so my teammates kept finding me. It’s something that we work on in practice, back-ins, me creating lanes for them to get to the rim, also. It’s just something that Coach preached to us.”

On changing the offensive scheme in the second half…
“I feel like that is our offensive plan. When we are making shots, it’s hard to stop us inside attacking the rim with players like Terry, Kario when he gets back, and Juice [Jusaun Holt]. We play strong to get to the basket, and it’s hard to stop us.”

On the defensive success tonight…
“Taking away the three is a big thing for our coaches. We don’t give up threes, so it’s about forcing them to take tough twos.”

On how he feels in his second game back from injury…
“I feel good. I might feel it later on or in the morning, but i feel pretty good for right now.”

On his three-point shooting tonight…
“I had to redeem myself from the last game, so I just came in and tried to use my legs. Once I saw the first one go in, I was pretty comfortable, and I felt good.”

On Braelen Bridges’ performance…
“That was big. He came in and brought energy, and the game rewarded him. We ask him to do that each and every game. If he continues to do it in practice, it will show.”

On how his teammates helped him return from injury…
“They just constantly encouraged me to keep going, wait my turn. Guys kept hitting me up about working out. They just continued to give me encouragement and motivation to stay with it.”