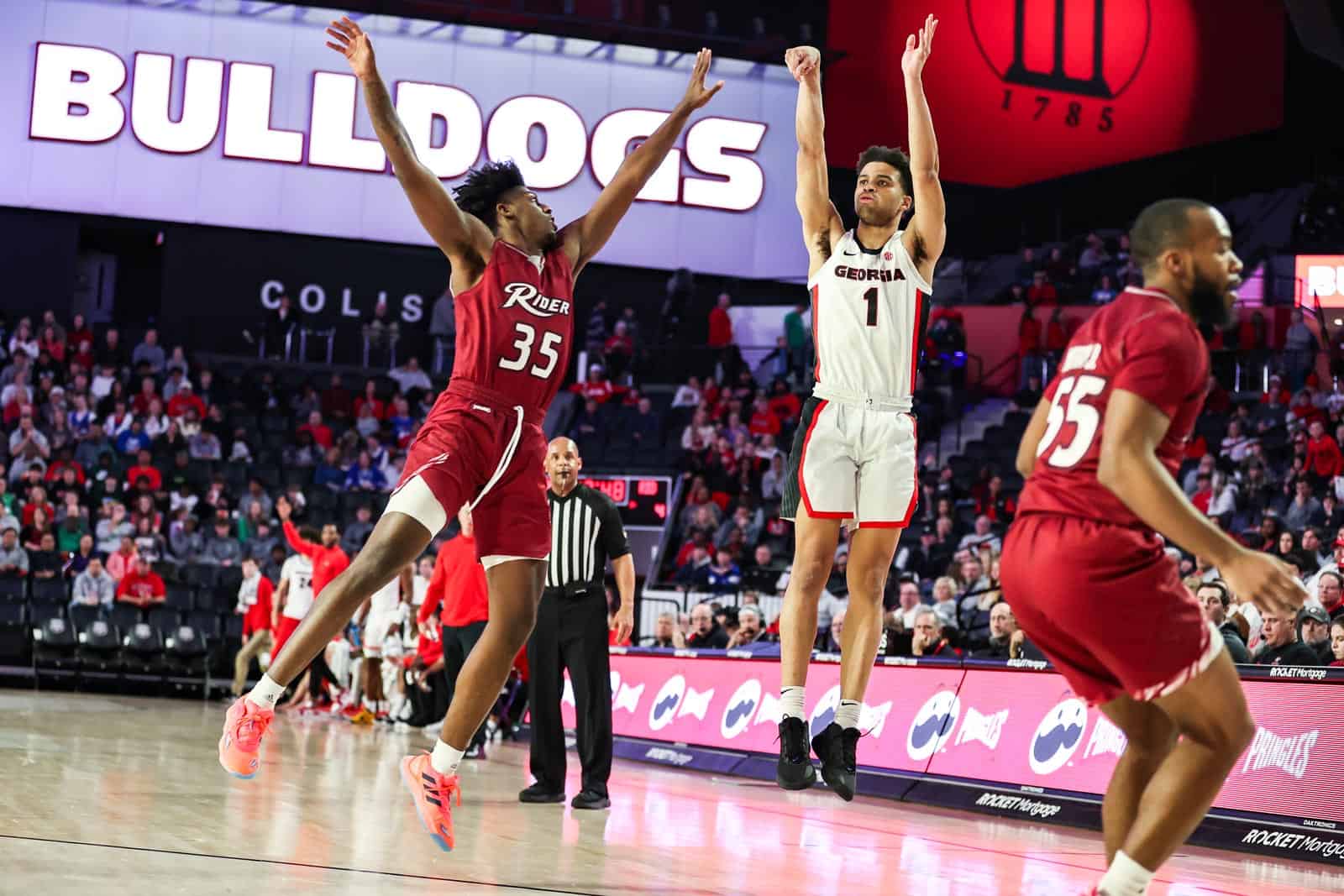 ATHENS, Ga. — The University of Georgia men’s basketball team defeated Rider 78-72 on Wednesday behind double-digit scoring outputs from a quarter of Bulldogs in front of a sellout crowd of 10,523 at Stegeman Coliseum.

“We found a way to win, so we continue to ride some momentum,” said head coach Mike White. “We’re a team that’s played really hard that’s been the aggressor in a lot of games, that’s dominated the glass in a lot of games to this point, and we’ve got to do that at a higher level in this league to be competitive in those areas. Those are the negatives. The way that we shot free throws; we’ve done a lot better than that. That’s another negative, and there’s probably two or three more. But, the positives are that we’re shooting the ball and executing better, we’re making better decisions with the basketball, our assists are going up, our turnovers are going down. If we can get back to the way that we rebounded, two, three, four weeks ago, combined with some of the other things we’re doing well, that’s out best version. We’ve got a way to go.”

Georgia (10-3) finished 13-of-22 from beyond the arc, making the most they’ve had in a game this season and tying for ninth-most in a single game all-time. Wednesday’s win gave the team its 10th win of the year, marking the fourth time the program has reached double-digit victories before January in its 118-season history.

The sellout crowd inside of Stegeman was the first non-conference sellout since Georgia defeated UMass 91-78 on December 30, 2018.

Oquendo opened the evening with Georgia’s first seven points, including a 3-pointer to start the game. Roberts went on to add a long ball of his own to give the Bulldogs a 10-0 lead heading into the first media timeout.

The offense continued its hot start when Abdur-Rahim connected on a pair of threes, the team’s fourth make on six attempts in the first nine minutes. Georgia took an 18-8 advantage with senior Braelen Bridges heading to the free-throw line as Rider (5-6) called a timeout midway through the half.

The Broncs continued to fight back and close the gap during the remainder of the first half. Rider held a 21-15 edge in rebounding, including an 8-0 mark on the offensive glass, using those extra possessions to create second-chance opportunities.

The Bulldogs found success in the first half thanks to their hot hand from 3-point range. Roberts became the fourth player to make a 3-point field goal in the first half as the senior cashed a deep attempt with 7:25 remaining. Georgia finished 6-of-9 from deep in the opening frame, taking a 37-30 advantage into the locker room.

Georgia went back to its hot hands from deep early in the second half and quickly went on a 12-4 run with two 3-pointers from McBride and one each from Jaylin Ingram and Roberts, taking an 18-point lead five minutes into the period. Justin Hill was credited with the assist on Ingram’s make, giving the junior his 250th career assist. Hill finished with two points and four assists on the night.

However, Rider responded with a run of its own to again cut the lead to just 10, but Roberts was able to keep the pressure on the opponent with a step-back trey for his 15th point of the night. The Bulldogs led 66-53 heading into the under-eight timeout.

The Broncs continued hitting tough shots and got the Red and Black lead down to eight, 70-62, with just 5:24 remaining as White called his second timeout of the half. Georgia’s offense cooled off a bit down the stretch, making only two field goals on 10 attempts throughout Rider’s run.

The Bulldogs’ offensive woes continued toward the end of the game, as Rider closed the gap to three points. However, Frank Anslem went to work on the glass on the following possession, getting three offensive rebounds that led to an Abdur-Rahim three. Rider’s Mervin James made a layup to put the score at 74-70 as the Broncs called a timeout with 1:49 left.
James put down a put-back with a minute remaining which put the Georgia advantage to just 74-72. After a miss from Oquendo at the rim, Bridges grabbed the offensive rebound and was fouled on his putback attempt. The center sank both of his free throws to seal the game.

The Bulldogs’ next game will mark the start of conference play as Georgia welcomes the No. 20 Auburn Tigers in Stegeman on Wednesday, January 4 at 6:30 p.m. ET.

• A New Face – Georgia opens the all-time series with the Broncs at 1-0. Along with the wins against Saint Joseph’s and Hampton, this is the third new opponent the Bulldogs have faced this season.

• Behind the Arc – The Bulldogs’ 13 three points makes is a season high. Jabri Abdur-Rahim led the team in three-point shooting going 5-8, a career high.

• Ingram Inches – Jailyn Ingram inched closer to the 700-rebound mark with his two boards tonight. He now has 695. He also edged closer to the 1,500-point mark with five points, needing just 28 more points to reach the target.

• Off the Bench – Georgia’s bench contributed 26 points tonight. On the season, the Bulldogs bench has outscored opponents 337-151 for a massive +186 margin.

• Heroic Hill – With his four assists tonight, Justin Hill passed the 250-assist milestone. Hill has 33 assists on the season, enough for second in the squad behind Terry Roberts’ 51.

• Sellout Show – Georgia played in front of a sellout crowd at Stegeman Coliseum, the first sellout crowd of a non-conference matchup since a 91-72 victory over UMass in Decemeber of 2018.

• Opponent Files – The Broncs enjoyed 44 points in the paint, as well as 23 points from the bench. Rider’s offensive scored 19 of their points off second chances, a constant trend in the game.

On Rider catching up at the end…
“I thought they played harder than we did, just being honest with you, I am always being honest with you guys. I thought that the fight within the game, they won, I thought they were the aggressor. Even in the first half, we were making shots, we go 13-25 from the three, Jabri [Abur-Rahim] hit five threes off the bench, Mardrez [McBride] gets it going offensively, Terry [Roberts] goes three-five from three. We have our first game, that’s a competitive game, where we get a plus five as his turnover. It moved well, made good decisions, passed, caught it, ball security, 14-9 and we are up two against Rider with a minute based on those guys getting 14 offensive rebounds. Really pounding us on the interior, we couldn’t get it going on the interior because of their physicality. I was really impressed by how hard they played, I thought they were really prepared, I think they are a good team and they played as hard and physically as any team we have played this year.”

On takeaways from this game heading into conference play…
“We found a way to win, so we continue to ride some momentum. But really, after almost every game, you’re going to take positives and negatives, after a win or a loss. Rarely is it almost all negative or all negative and rarely is it all positive, and if it is, you find something to use as a learning tool for your guys through film. There’s a bunch of both in this one. We’re a team that’s played really hard, that’s been the aggressor in a lot of games, that’s dominated the glass in a lot of games to this point, and we’ve got to do that at a higher level in this league to be competitive in those areas, those are the negatives. The way that we shot free throws, we’ve done a lot better than that, that’s another negative, and there’s probably two or three more. But the positives are that we’re shooting the ball and executing better, we’re making better decisions with the basketball, our assists are going up, our turnovers are going down. If we can get back to the way that we rebounded, two, three, four weeks ago, combined with some of the other things we’re doing well, that’s out best version. We’ve got a ways to go.”

On Rider’s offensive rebounding…
“I thought were a step slow there. They were a little quicker with the ball, there transition offense beat our transition defense three or four times. Now, that said, our transition offense is another positive. I thought our playing downhill on the first eight seconds was one of the factors that got us some open looks, some of those threes were early and some of those rim runs were early. Some of the fouls that we drew were off pitch a heads makes or misses. But for the most part on the interior, I thought that they played a little bit tougher, a little bit more physical and they were certainly the aggressor on the interior. We have got to pick it up in those areas in league play starting in a week, or we will increase our margin for error.”

On Rider’s second-half push…
“Just play and get to the rim. They were just a really aggressive team. They were getting to the rim, and if they missed, they were going up again to rebound and put it back.”

On Georgia’s struggles on the offensive glass…
“They go to the glass hard – all five. Everybody goes to the glass hard. We all had to work on hitting and locking in on boxing our guys out.”

On tonight’s matchup…
“They’re really tough – really, really tough. We struggled to match their intensity at times, but we made up for it with our shot-making. Everbody shot well, so if we shoot like that, I think we are really hard to beat. So, if we just combine the intensity with the shot-making, we have a chance to be really good.”

On his career night behind the arc…
“Last game I was like 0-6 [on three-point attempts]. So, I’m just staying confident, trusting in my work, and not losing confidence in having a bad game. My teammates trust in me and want me to shoot when I’m open.”

On his free-throws to close out the game…
“Just make them. I’ve been here before. Nothing irregular, they’re just regular shots.”

On opening SEC play next week…
“We have to step it up. It’s the best league in the country, people say. Every night is going to be a challenge. I played in it last year, and it was a challenge every single game. So, we just have to be ready and focus in a lot more.”