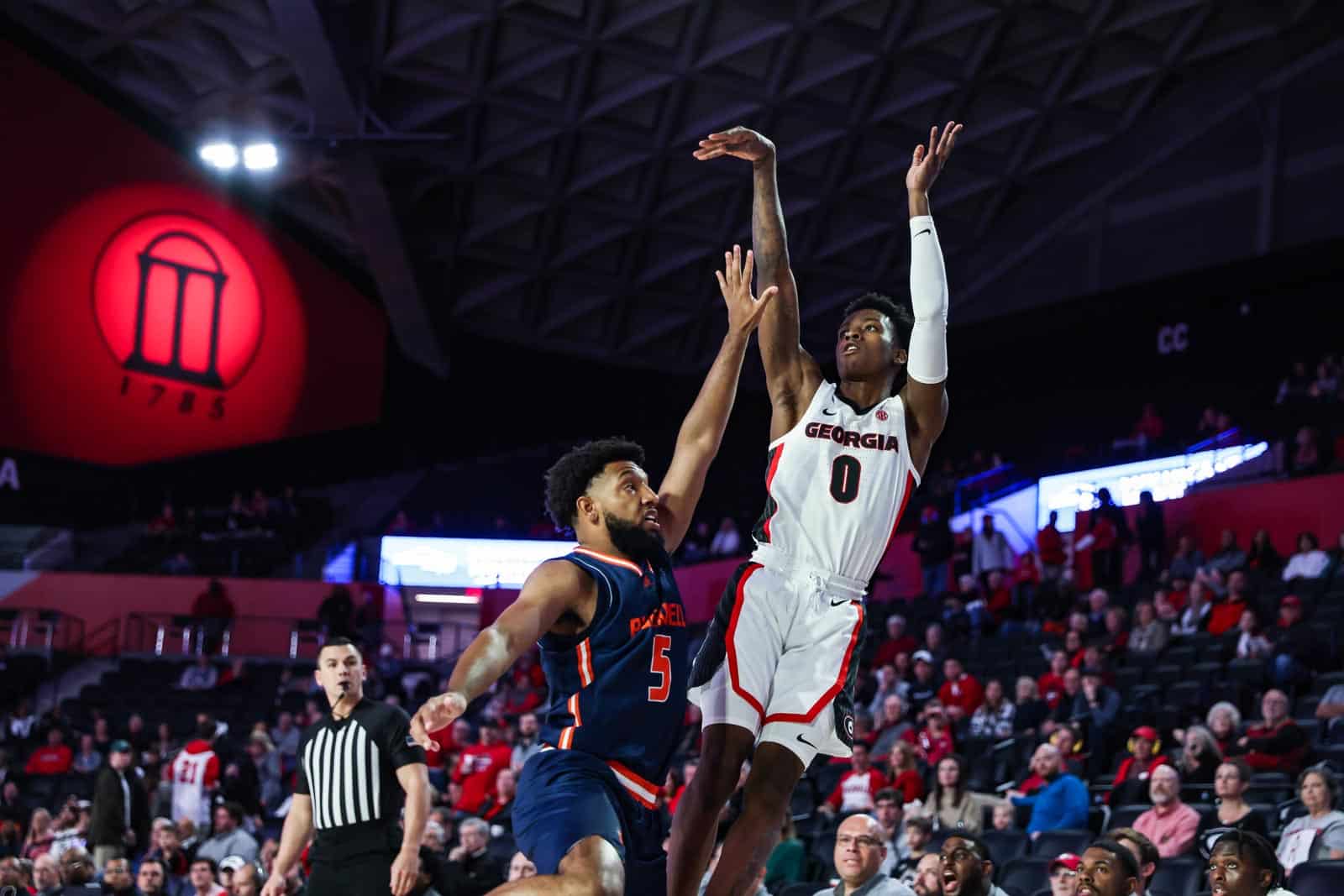 With the win, Georgia improves to 3-1 on their young seasron. The Bison move to 2-2 overall.

Terry Roberts led all scorers tonight with 20 points along with nine rebounds – a season high for the senior guard.

“I’m proud of our bench,” said head coach Mike White. “Jabri (Abdur-Rahim), Jaxon (Etter) and some of the guys really stepped up tonight. We found a way to win another one ugly, but it’s better than an ugly loss, right? Bucknell is a good program. They win year-in and year-out. They’re really difficult to defend. They present so many issues with those two bigs that can score with enormous size and a bunch of guys that can really shoot it. They set good screens. They really pack it in defensively too. They’re very sound defensively. We obviously didn’t shoot the ball great, and that’s not a strength of ours right now. Happy to have a win against a really good program.”

Mardrez McBride put the Bulldogs on the board knocking down two jumpers before the Bison strung together several possessions to take an early first half lead. Roberts and Etter hit back-to-back three-point shots to cut into the Bucknell’s lead.

McBride and Roberts led the Bulldogs at break with seven points. While only shooting 28 percent from the field, Georgia boasted 92 percent shooting from the foul line.

Roberts continued his dominant performance with a strong offensive rebound and put-back to tie the score at 34. Jusaun Holt stamped his name on the game with a huge defensive block, and a Roberts breakaway on the following possession gave Georgia the lead, 36-34.

The Bulldogs found their offensive rhythm going into the final 12 minutes of the contest as Abdur-Rahim and Roberts each connected on three-point jumpers. Abdur-Rahim scored on the ensuing possession to give Georgia a 14-point lead – its largest of the night.

Despite Bucknell’s 13-5 run in the final five minutes of the contest, Justin Hill dropped two free throws to seal the win for Georgia.

Next up, the Bulldogs travel to Daytona Beach, Florida to face Saint Joseph’s on Monday, Nov. 21 in the 2022 Sunshine Slam. Coverage will begin at 8:30 p.m. on the CBS Sports Network. The Bulldogs’ next home game is a week from Sunday when they will host East Tennessee State at Stegeman Coliseum at 1:00 p.m.

• Series History – Tonight’s game marked the third meeting between the Bulldogs and the Bison. Georgia leads Bucknell 3-0 in the all-time series with all three games being in Athens.

• Terrific Terry – Terry Roberts combined for 42 points in Georgia’s last two games. Tonight the senior led the Bulldogs in scoring for the third game in a row with 20 points. Roberts grabbed a season-high 9 boards tonight.

• Free Jabri – Jabri Abdur-Rahim recorded 10 points tonight. Tonight was his ninth career double-digit scoring performance and his first for the Bulldogs this season.

• Super Charged – Jaxon Etter nailed back-to-back 3-pointers and logged a pair of charges in his first game since receiving a scholarship. Etter has drawn a charge in each game this season, including 35 in his last 35 game played dating back to the beginning of last season and upping his total 43 charges in 46 contests dating back to the end of his sophomore campaign.

• Mainstay McBride – Mardrez McBride has inked four starts this season. Tonight’s start was McBride’s 64th career, starting in every game of his career.

• Charity Stripe – The Bulldogs were 23-26 from the line tonight, recording the best free throw percentage of the season with 88.5%

Opening Statement…
“I’m proud of our bench. Jabri (Abdur-Rahim), Jaxon (Etter) and some of the guys really stepped up tonight. We found a way to win another one,ugly but it’s better than an ugly loss, right? Bucknell is a good program. They win year-in and year-out. They’re really difficult to defend. They present so many issues with those two bigs that can score with enormous size and a bunch of guys that can really shoot it. They set good screens. They really pack it in defensively too. They’re very sound defensively. We obviously didn’t shoot the ball great, and that’s not a strength of ours right now. Happy to have a win against a really good program.”

On his message to the team at halftime…
“Just to say the course. All we can control is getting great shots. We had too many turnovers, 15 turnovers in the first half. That’s not a staple of this team right now in terms of making great decisions and valuing it. Our overall skill level has to improve. Decision making has to improve when we settle in at the halfcourt or when we’re playing a little too fast off of turnovers or misses. I can live with an open- I’m not mad at anyone for missing an open shot. We can control trying to get a good one. We call them ‘A’ shots. We don’t want ‘F’ shots. You’re going to fall into some ‘C’ shots, of course, against some defenses. ‘C’ shots are a heck of a lot better than a turnover. Obviously, we made some in the second half to give us that lead. Thank goodness we got the lead that we got because at that time it was all about holding on.”

On the Terry Roberts and Jailyn Ingram’s injuries….
“Terry has dealt with just some cramping it looks like. Lance [Schuemann] didn’t say that, but he was holding his lower leg of course and guzzling water and then he said he was fine after a minute, so I am assuming he cramped up there really quick. Ingram’s getting closer, getting some reps in practice, some full court reps here the last couple of days.”

Jusaun Holt’s player transformation…
“He is a different player and that’s the funny thing, there is not a lot of similarity on our roster. You got a bunch of guys that are just very different at different things and bringing different things offensively and defensively, even offensively, within the offensive end of basketball, a different skill set. Juice is a high energy, high level defending guy, he makes a lot of effort plays, he takes a lot of pride in getting offensive drives and cutting and again defending. He’s a developing offensive player. He’s a guy that can make an open shot of course. He’s had some success early on in his career straight line driving. His ball decisions are improving. He started to slow down a little bit, and that’s what a lot of young players at this level need to go through that process, in terms of playing really hard without the ball, defensive rebounding at certain speed. That speed with the ball in your hand has to be a little slower. You have to slow down mentally. These last couple of games, it’s been slowing for him a little bit and his feet got a little hoppy. A couple catches but I think he’s seeing the game a little bit slower and just pausing.”

On players stepping up…
“Next man up. All these guys want more opportunities. Even our starters want more minutes. Guys that come off the bench want to start. What do you do, I felt for Kario (Oquendo).We were hopeful that a couple guys would step up. I liked the aurora on the bench tonight in terms of guys being ready to go, again led by Jabri (Adur-Rahim) that’s certainly better than the alternative. You need the next man to step up. If they are not mentally ready, then you are in trouble. If we didn’t get that production tonight from our bench we would have been in trouble.

On the teams focus on rebounds…
“It’s stressed every single day. If we don’t hear Coach White say, ‘Grab some rebounds,’ something’s wrong. Every single day, rebounding is preached and that is something that is set at a high priority. Jabri Abdur-Rahim did a great and fantastic job tonight at starting the spark and lighting the spark of going and getting rebounds.”

On heading into the second quarter…
“Halftime was full of energy. Vibes were high. Coach was adamant about keep getting stops, keep grinding, keep your nose on the grindstone. Every single detail matters and that’s kind of what we did. The rebounding just sparked us big time. When you throw some effort plays in there and some unselfish plays, the game’s going to start to click.”

On his scholarship announcement…
“I couldn’t even control my emotions. My emotions were all over the place – I was laughing, crying, everything in between. It was one of the coolest experiences of my entire life. I’ve been literally dreaming about that at night and how it would go down. The dreams weren’t anything close to how it actually was. It was awesome.”

On the halftime message from Coach White…
“We just have to respond. Respond, respond, respond. It’s a long game with adversity, so we just have to keep fighting and keep at it. The main thing was that we just have to focus on making shots and try to control their starters defensively. They were a really good three-point shooting team, and we tried our best to keep them off the line. They made a couple shots, but I thought down the stretch we did a pretty good job.”

On having to grind out the game…
“It was just a team effort, honestly. Everybody played tonight. We all know what Kario can do, and he wasn’t available. When a guy like that is out, you know it’s going to have to be everybody that has to step up. You have to step your intensity up and play at another level, and that’s what we did. Even though we were tired, it doesn’t matter. We love hooping and that’s what we were doing.”