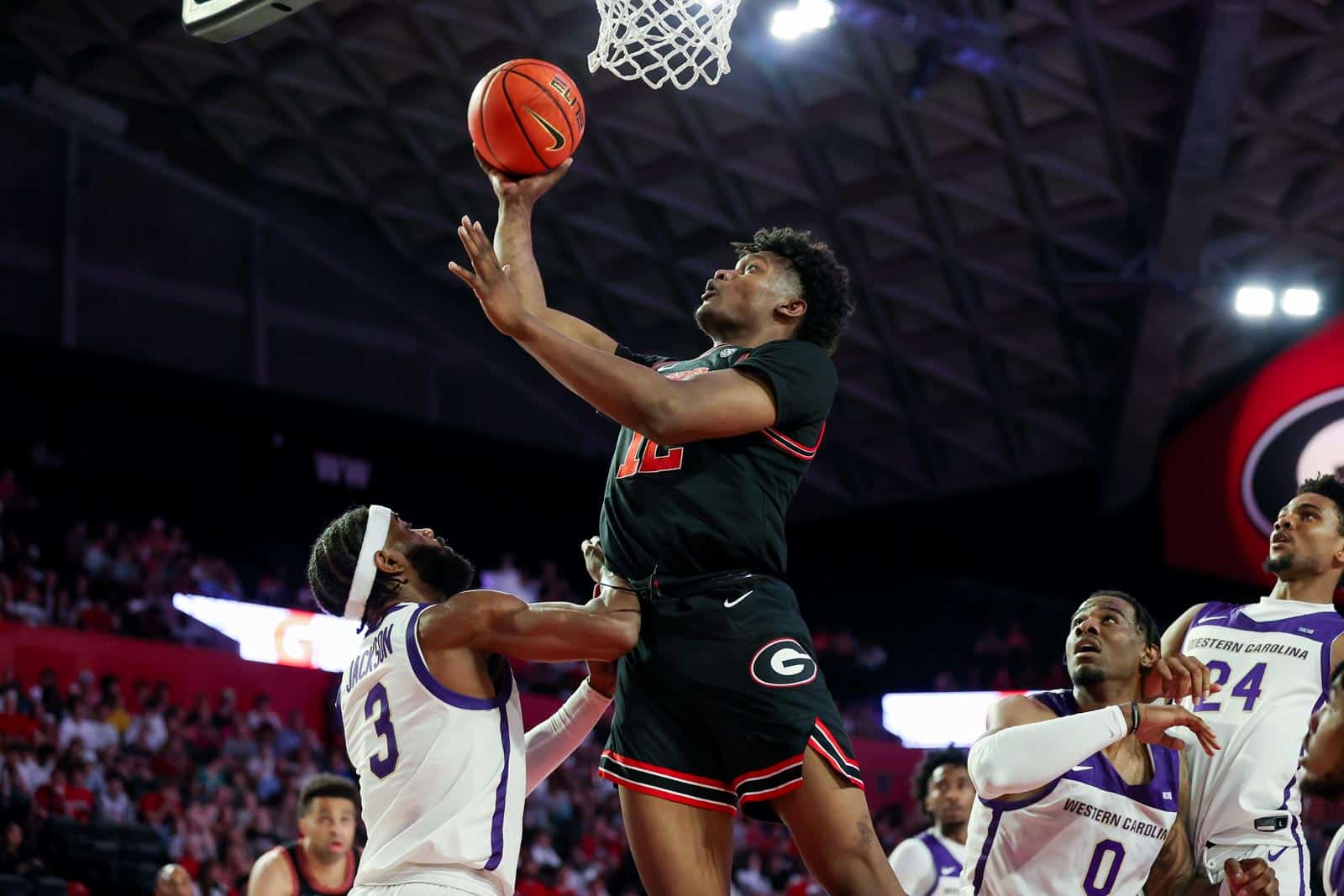 ATHENS, Ga. — After transfer Frank Anslem scored the first points of the Mike White era against the Western Carolina Catamounts (0-1), the Georgia Bulldogs (1-0) never surrendered their lead for the remainder of the game, winning their season opener 68-55 on Monday evening at Stegeman Coliseum.

Junior Kario Oquendo guided the team filled with newcomers, appearing to be in midseason form as he led the team with 18 points on 7-of-11 shooting including a pair of three-pointers and three blocks. Anslem added 11 points and four rebounds in his first official outing as a Bulldog.

“Feels good to get a win with the Dawgs,” said Coach White. “I am happy for all of the newcomers to this program, there’s a bunch, most of our locker room of course, and that goes all the way down to our staff, our support staff. Portal guys, freshmen, walk-ons, but probably most importantly, I am happy for those guys that decided to come back this year. We have put forth a lot of effort this fall and found a way to grind one out.”

Georgia started to settle into its game coming out of the first media timeout. The Bulldogs looked much more poised both offensively and defensively coming out of the break, earning three assists on five made shots and holding the Catamounts to 2-of-15 shooting on their field goal attempts. After Georgia claimed a 15-5 lead, Western Carolina took a timeout.

Oquendo looked like his productive self throughout the night, best evidenced by his ability to make something out of nothing. After what appeared to be a turnover coming out of a dead play and a broken screen, the Titusville, Fla. native found a way to not only recover the ball but also get it off the glass into the basket. The Dawgs would go on to hold a 37-22 lead heading into the locker room.

Western Carolina opened the second half on a 15-3 run, as the Catamounts forced four turnovers from the Bulldogs. Out of the first media timeout of the half, WCU cashed in a trio of consecutive three-pointers and cut its deficit to two, 42-40.

The Red and Black were able to take control once again, regaining a seven-point lead into the under-12 media timeout thanks to buckets from Anslem and Jabri Abdur-Rahim. From there, Georgia managed to keep Western Carolina at bay through the under-four timeout, leading 61-50, and eventually to the end of regulation, winning the opening contest by a 68-55 score.

The Bulldogs will next travel to Winston-Salem, NC. and take on the Wake Forest Demon Deacons on Friday at 8:30 p.m. The game will be televised on the ACC Network. Georgia’s next home outing is a week from today when the Bulldogs host Miami (Ohio) at Stegeman Coliseum.

• Series History – Tonight’s game marked the ninth meeting and fourth season opener between the Bulldogs and the Catamounts – Georgia leads Western Carolina 9-0 in the all-time series. With the win, the Bulldogs move to 85-33 in season openers, including 39-6 at Stegeman Coliseum.

• A New Era – Georgia opened a new era of basketball with head coach Mike White at the helm on Monday evening. With the win, Coach White moved to 9-3 all-time in season openers, including 6-0 at home.

• King Kario – Junior Kario Oquendo picked up right where he left off, logging 18 points, a career-high three blocks and a pair of boards in the season opener. Tonight marked Oquendo’s 24th double-digit performance as a Bulldog and his 14th consecutive double-digit outing, dating back to the 2021-22 season.

• Frank the Tank – Frank Anselem went 5-of-7 from the field and 1-for-1 from the charity stripte to post a career-high 11 points in his Bulldog debut. He previously recorded nine points against Florida State on Feb. 9, 2022.

• I’ll Take That – In his collegiate debut, KyeRon Lindsay racked up a team-high six boards against the Catamounts.

Opening statement…
“Feels good to get a W with the Dawgs. I am happy for all of the newcomers to this program, there’s a bunch, most of our locker room of course, and that goes all the way down to our staff, our support staff. Portal guys, freshmen, walk-ons, but probably most importantly, I am happy for those guys that decided to come back this year. We have put forth a lot of effort this fall and found a way to grind one out. I thought we defended the three well enough, overcame some adversary there with a valiant effort early second half by Western Carolina, I thought they were tremendous with their fight, poise and resiliency. [Matthew-Alexander] Moncrieffe didn’t help us in the second half, he means a lot to us obviously. We had some guys that I didn’t quite expect to potentially play this much tonight, namely Jusaun Holt. He might have been the last guy put in the game in that rotation, but I thought he was fantastic in the second half with his energy level, a lot of things that didn’t show up on the box score. I thought we took a step in the right direction in terms of responding to adversary in a better fashion than we did against Georgia College. I thought mainly on the defensive end, we buckled down and stepped up our level of communication, our level of intensity. Probably, six to eight minutes left and got it going, strung together some stops.”

On what he learned about this team in the second half…
“It’s a competitive group. A lot of the same things. I’m not sure I learned anything new, that we haven’t talked about before. We have some toughness. It’s a group that doesn’t mind earning some floor burns. We did it again tonight… Terry (Roberts), Justin (Hill) MA (Mathew-Alexander Moncrieffe) in the first half, I thought he was really good, (Justin) Holt, Jabri (Abdur-Rahim). Depth. Parity. Kario (Oquendo) made some timely plays offensively. This group has a little fight to us. We have to have a lot more fight to win these (games) in our league, of course, and we have to execute better offensively and defensively. We have to value the ball at a much higher level. But, we are closer defensively. Coming into this one, these guys (Western Carolina) were third in the country in three-point attempts, last year of course. It’s what they do, they space you a lot of times with four shooters, sometimes with five shooters. To only give up 18 three-point attempts is pretty good. It’s a pretty good sign that guys are locked in and flying around. We’re communicating. We’re anticipating. We’re rotating. We’re doing a lot of good things. We had four or five very subpar defensive transition possessions, one or two baseline out-of-bounds possessions, then we look down and they have 55 points. They are a team that is hard to guard. We are closer there, but we have a ways to go offensively.”

On Terry Roberts…
“He’s a tough, competitive dude. He gets his hands on basketballs. He’s got a knack for getting loose balls, creating loose balls, picking passes, can really move laterally. He’s a high-level defender. He’s going to help us offensively, as well. He’s our best passer. I thought they did a pretty good job of defending his ball screens. We had a few that were illegal ball screens which means we have to clean some stuff up. It means a lot to Terry, to Terry’s teammates, to have him back, to our staff, as well. He’s a wonderful young man who has had a really good fall.”

On losing Matthew-Alexander Moncrieffe for the second-half…
“I was told an ankle. I didn’t see it in the first half, but I guess it tightened up on him at halftime. I thought he had a really good first half. Plays as hard as anyone on our team, of course, so we look forward to getting him back healthy.”

On being benched from fouls …
“The coach was trusting me, and the team was trusting me. I just had to stay locked in on the bench. I was happy that everybody in the game was able to keep it going. I was able to go back in during the second half and keep helping out the team.”

On playing his first actual game in Stegeman…
“It was really great and I had a lot of fun. The team did really well and came together as a group even when adversity hit. At the end of the day, we come together to win.”

On transitioning from Syracuse to UGA …
“It’s been great. There it’s probably 40 degrees and snowing right now unlike 75 and cool here. I can walk back to my dorm after this without freezing.”

On what the team needs to do to beat Wake Forest …
“I think today as a team we played really well. We need to lock in at practice. We need to be good on defense and take good shots. We need to play basketball. If they go out there and play as hard as they can, we just need to play harder than them.”

On showing poise after losing an 18-point lead…
“When we came out at half time I feel like we took a step back, in terms of they took the energy of the game. They took the momentum. So when we got back, got all ready and found our five, we came in, played hard, played defense and got some stops and got the lead back up so that was good.”

On getting in a shooting rhythm…
“I got some good looks and most of them were falling. I missed my first shot. It was like an airball. So I went out, got my composure back, got downhill and hit some three’s so that was good.”

On 21 turnovers…
“I would say we were just trying to do too much. We just needed to make the certain plays that Coach White always stresses and just make the easy plays. I think we were trying to make the hard plays.”