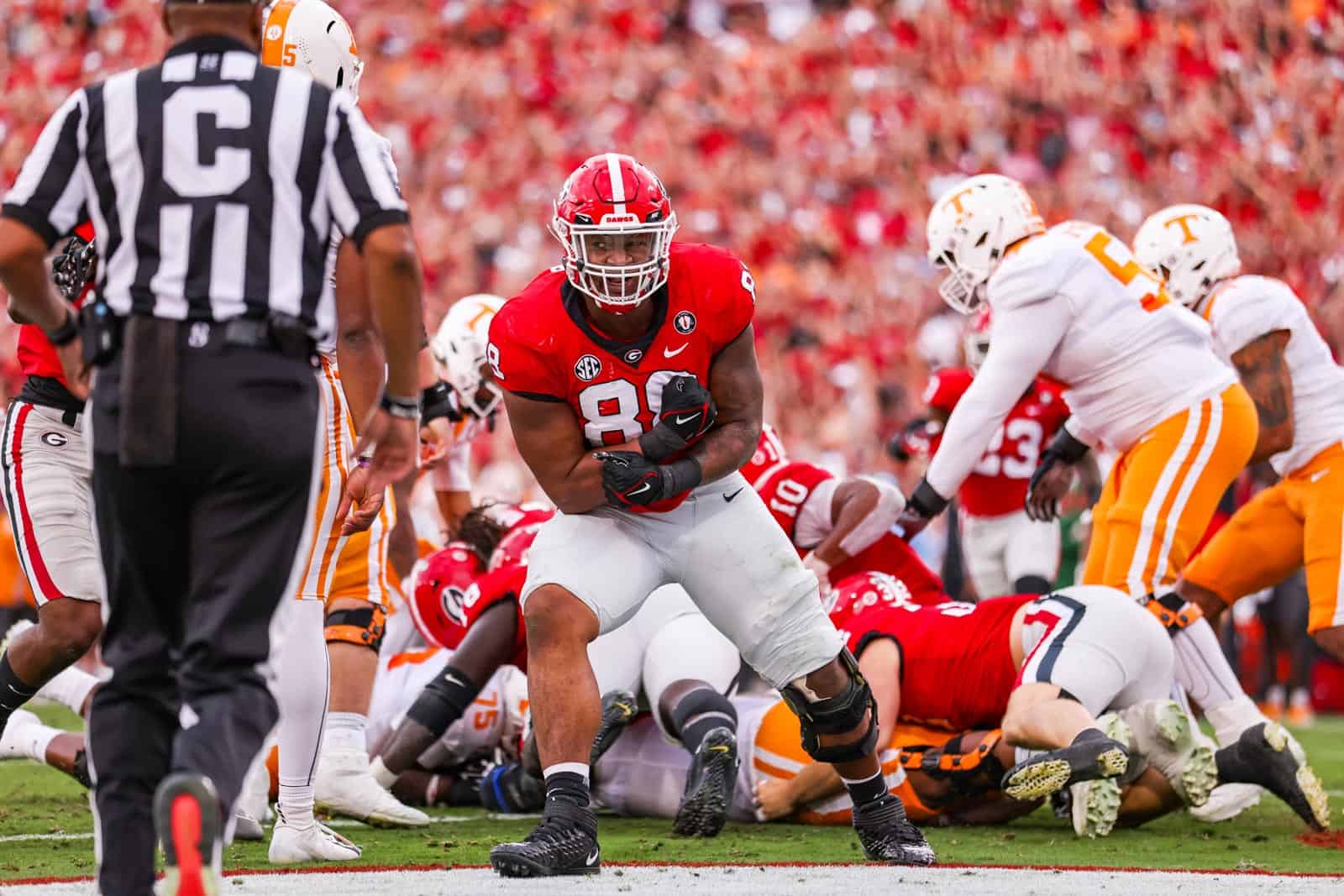 UGA football junior defensive tackle has been named a finalist for the 2022 Outland Trophy, the Football Writers Association of America (FWAA) has announced.

The Outland Trophy is an award that is given annually to the nation’s top interior lineman on offense or defense.

Jalen Carter joins six other semifinalists. Below is more info on each candidate from the FWAA:

Steve Avila, G, TCU (6-4, 330, Sr., Arlington, Texas): Avila, one of the Horned Frogs’ captains, has anchored one of the FBS’ top offensive lines that has put TCU, picked seventh in the preseason Big 12 poll, in contention for a College Football Playoff berth. With first-year head coach Sonny Dykes at the helm, TCU is tops in the FBS in plays of 50-plus (15) and 60-plus (9) yards and one of three (Ohio State, Oregon) averaging at least 270 yards per game passing, 200 rushing and have at least 20 passing and 20 rushing touchdowns. A two-time All-Big 12 center now playing guard with 30 career starts to date, Avila has helped running back Kendre Miller (1,147 yards) become TCU’s first 1,000-yard rusher since 2016 and push for the Big 12 rushing title.

TCU has never had an Outland Trophy semifinalist. The Frogs last had defensive linemen on the FWAA All-America teams from 2008-10 with Jerry Hughes (2008, ’09) and Wayne Daniels (2010).

Jalen Carter, DT, Georgia (6-3, 300, Jr., Apopka, Fla.): Carter, already considered one of the top interior linemen in the nation coming into the season, has missed time with a knee injury and has played in only eight games. He’s been a force in his last two games. In his Nov. 5 return against then-No. 1 Tennessee, Carter had four tackles, a sack and two TFL’s and forced two fumbles as Georgia shut down the Volunteers and gave up its only touchdown with the game decided. The following week, Carter had a career-high seven tackles, another sack to go with 1.5 TFL’s at Mississippi State. With Carter in its interior for most of the season, Georgia has only allowed three rushing touchdowns this season.

Paris Johnson Jr., OT Ohio State (6-6, 310, Jr., Cincinnati, Ohio): Johnson is the stalwart among a host of great Buckeyes up front, starting in 23 consecutive games dating back to the start of the 2021 season and powering one of the nation’s top offenses in that time. The Buckeyes have a balanced average of 501.9 yards of total offense – 294 passing and 207 rushing – that is sixth nationally, and their 63 offensive touchdowns lead the FBS and their 46.8 points per game is second. The line is tied for sixth nationally in fewest TFL’s allowed with 37 and with only seven sacks allowed. Part of its scoring prowess moving most often to Johnson’s side, Ohio State has scored on 47 of 49 trips into the red zone.

Johnson is Ohio State’s third consecutive semifinalist following Nicholas Petit-Frere in 2021 and Wyatt Davis in 2020. Billy Price was also a semifinalist in 2017. The Buckeyes have four previous winners of the Outland Trophy in Orlando Pace (1996), John Hicks (1973), Jim Stillwagon (1970) and Jim Parker (1956).

Calijah Kancey, DT, Pitt (6-0, 280, Jr., Miami, Fla.): Kancey is the among the national leaders with 14.0 tackles for loss (t-11th in FBS) and 7.0 sacks (t-26th). The pass-rush specialist is also a finalist for the Bronko Nagurski Trophy, the FWAA’s award honoring the nation’s most outstanding defensive player. Kancey’s career highs of 3.0 sacks (vs. Virginia) and 3.5 TFL’s (vs. Georgia Tech) have come within Pitt’s last six games. Kancey – pronounced Kah-LIE-jah and rhymes with ‘Elijah’ – is seventh on the team with 29 total tackles with 17 solos. Bolstered by his efforts on the outside, Pitt leads the nation in sacks with 3.70 per game.

Pitt already boasts a defensive tackle from its two former Outland Trophy winners, Aaron Donald in 2013. Offensive tackle Mark May won it in 1980. Mark Stepnoski, a guard, was a finalist in 1988. Three of Pitt’s five FWAA All-Americans over the past four seasons – Jaylen Twyman on the 2019 second team, Rashad Weaver on the 2020 first team and now Kancey – have come from its defensive line.

Olusegun Oluwatimi, C, Michigan (6-3, 307, Gr., Upper Marlboro, Md.): Michigan has returned to contention in the Big Ten and the College Football Playoff because of its offensive line success ahead of its run game. Oluwatimi was a second-team FWAA All-American at Virginia in 2021 before becoming a graduate transfer to Michigan last spring. He has 42 career starts at center between the two schools and has helped the Wolverines ichigan produce six 225-yard-plus  rushing performances this season and the Wolverines lead the Big Ten and are fourth nationally in rushing at 251.4 yards per game. In the passing game, Michigan has yielded only 12 sacks (21st in FBS) and 44 total TFL’s (23rd) in 706 snaps.

Michigan has not had an Outland Trophy winner in its past and its last finalist, offensive tackle Jake Long, came in 2007. Center David Baas (2004) and offensive tackle Greg Skrepenak (1991) are also former finalists. Also of note, Michigan’s last offensive lineman to earn FWAA All-America status was center David Molk in 2011.

John Michael Schmitz, C, Minnesota (6-4, 320, Sr., Flossmoor, Ill.): Schmitz is in the middle of a line that has had remarkable consistency starting the same five up front in every game this season. Schmitz, considered one of the two best centers in the nation along with Michigan’s Oluwatimi, guides an offense that has running back Mohamed Ibrahim on a streak of 18 consecutive 100-yard games – the longest by any FBS player since 2000 according to ESPN. Ibrahim averages 5.4 yards per carry and has three games of 200-plus yards. In protection, the Gophers have given up just 10 sacks in 10 games, tied for 13th in the FBS for fewest allowed, and given up 42 TFL’s is the 16th-best mark. Minnesota has dominated time of possession this year averaging 35:44 minutes with the ball, second only to Air Force nationally.

Schmitz is Minnesota’s first Outland semifinalist and first FWAA All-American on the offensive line since 2005 when Greg Eslinger won the Outland Trophy. Eslinger is one of three former Gophers to win the Outland along with defensive tackle Bobby Lee Bell (1962) and guard Tom Brown (1960). Those are Minnesota’s only prior semifinalists

Peter Skoronski, OT, Northwestern (6-4, 315, Jr., Park Ridge, Ill.): Skoronski leads all offensive linemen with a 93.1 pass blocking grade, according to Pro Football Focus. A team captain with 30 career starts, Skoronski has allowed only five pressures on 383 pass-blocking snaps this season. A two-time All-Big Ten player – second team in 2020 and first team in ’21 – his run-blocking grade is also in the top-15 per PFF. Skoronski and the line combined to give up only one sack for minus-five yards and 9.0 total TFL’s in feature games against Ohio State and Penn State this season.

Three finalists for the 2022 Outland Trophy will be announced on Tuesday, Nov. 29, while the winner will be revealed on The Home Depot College Football Awards on Thursday, Dec. 8 on ESPN.