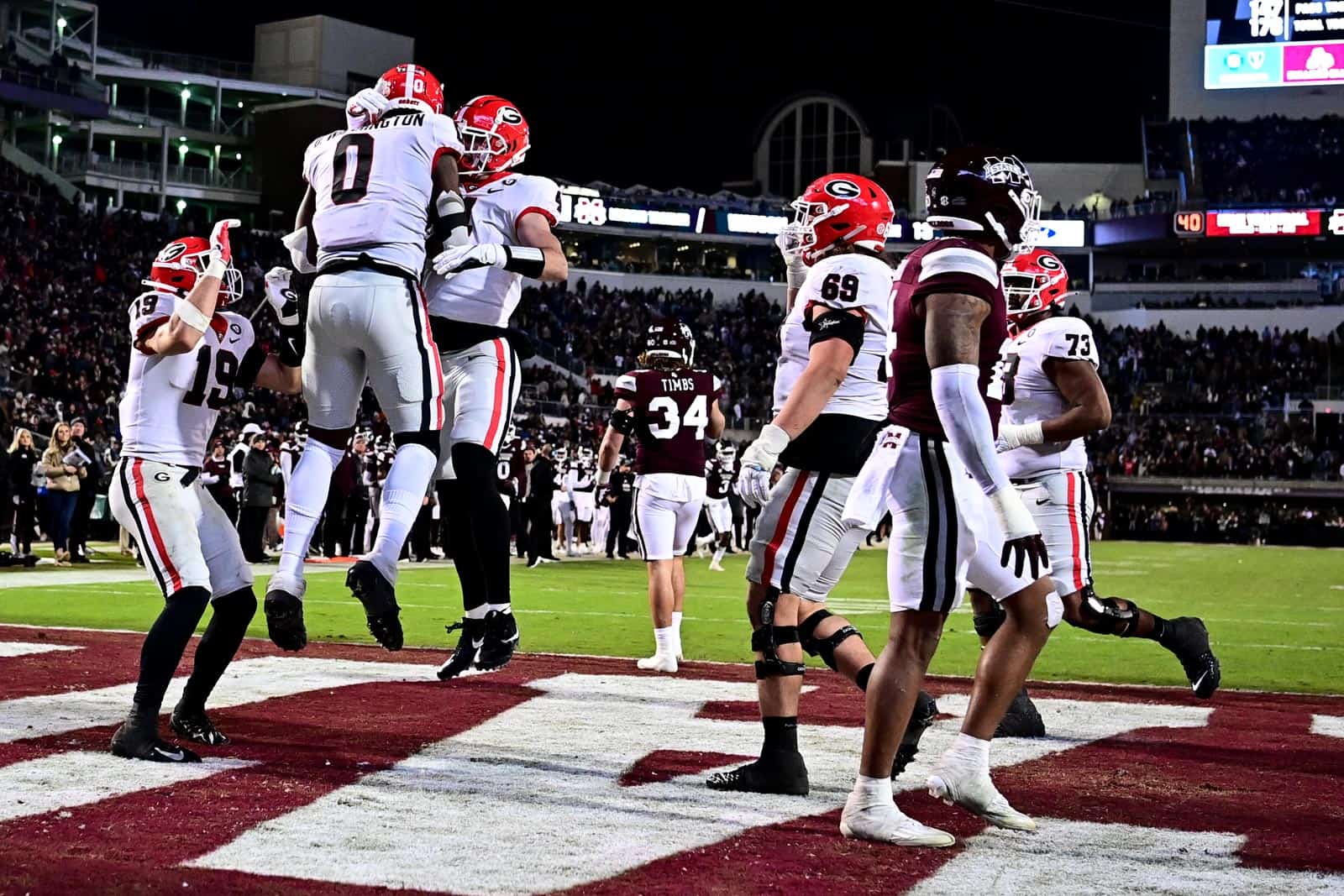 STARKVILLE, Miss. – Top-ranked Georgia clinched another berth in the Southeastern Conference Championship Game with a 45-19 victory over Mississippi State in front of 60,352 fans at Davis Wade Stadium at Scott Field on Saturday.

The Bulldogs will face LSU in the SEC Championship Game in Atlanta on Saturday, Dec. 3, following games at Kentucky and at home against Georgia Tech. Georgia will represent the East for the second straight year, the fifth time in six seasons, and for the 10th time overall.

Quarterback Stetson Bennett went 25-of-37 for 289 yards and three touchdowns and rushed for a score to spark Georgia on Saturday. He connected with tight ends Brock Bowers and Darnell Washington and receiver Ladd McConkey on the passing touchdowns. McConkey added a rushing touchdown and finished as the Bulldogs’ leader in receiving (71) and rushing (70) yards. Tailback Kendall Milton sealed the game with a late touchdown run. Kicker Jack Podlesny went 6-for-6 on PATs and drilled a field goal. Georgia finished with 468 total yards and went 5-for-5 in the red zone.

Linebacker Smael Mondon and defensive back Malaki Starks each had eight tackles for Georgia, while defensive lineman Jalen Carter added a career-best seven stops, including a sack. Mississippi State registered 308 total yards but was a combined 3-of-17 on third and fourth down.

“Our team was resilient and fought and did what we asked of them,” Georgia head coach Kirby Smart said. “I am so proud of them. This is a tough environment, but our kids respected the environment and the momentum and the rhythm. I appreciate how we prepared in the right way, a very mature way. We never take winning the East for granted and that’s where we are now, but we’re playing for more than the East. We’ve got some things to clean up, so it’s one day at a time.”

Georgia opened the scoring in the first quarter with a 2-yard pass from Bennett to Bowers. Bennett was 5-for-5 for 64 yards on the 9-play, 73-yard drive. Georgia pushed its advantage to 10-0 in the second quarter with a 28-yard field goal by Podlesny. Following a Mississippi State field goal that cut it to 10-3, Bennett engineered an 8-play, 75-yard drive — highlighted by two passes to receiver Kearis Jackson covering 38 yards — and capped it with a 4-yard scoring run for a 17-3 lead. After the home-standing Bulldogs tacked on another field goal for a 17-6 score, Mississippi State’s Zavion Thomas returned a punt 63 yards for a touchdown to make it 17-12 at intermission.

McConkey took over in the third quarter as he scored two touchdowns in a 5-minute span, then caught a 28-yard pass to set up another touchdown on the first play of the final stanza. McConkey raced 70 yards on an end-around rush for a score, then hauled in a 17-yard touchdown pass from Bennett. After McConkey’s 28-yard catch got the Bulldogs into scoring position, Bennett opened the fourth quarter with a 2-yard touchdown pass to Washington. Milton put the game on ice as he darted 34 yards for the final score.

The Bulldogs will return to action next Saturday at Kentucky. The game will kick off at 3:30 p.m. and will be televised by CBS.

*At 10-0, Georgia has double-digit wins for the fifth time time in Smart’s seven seasons and 27th in school history.

*The Bulldogs now have won 25 straight regular season games including their last 18 SEC games in that span.

Defense Delivers Again: Georgia came in ranked 2nd nationally in scoring defense, allowing just 10.8 points a game while MSU came in scoring 32.6 ppg. MSU finished with only 19 points on 310 yards of total offense on 67 plays. MSU had a 62-yard punt return for a TD by Zavion Thomas with three seconds left in the first half to make it 17-12 after a two-point try failed.

*Junior Jalen Carter had a career-high seven tackles and notched a sack, his 2nd of the season and 17th by the Bulldogs this year.

*Georgia came in fourth nationally in 3rd down defense as opponents converted only 27 percent of the time. MSU went 3-14 on 3rd downs plus 0-3 on 4th downs. On the first 4th down, Smael Mondon (career-high 8 tackles) got a pass breakup at the line of scrimmage on a 4th-and-1 at the UGA 48.

*The Bulldogs have not allowed a TD in the first quarter this year (just three field goals) and led tonight 7-0 after the first.  In the first, MSU had 30  yards of offense on 14 plays with one first down. Georgia has posted 20 scoreless quarters this season.

*MSU won the toss and took the ball and went three-and-out, gaining three yards before a punt. Georgia responded with a TD.

*On its opening drive, Georgia went 73 yards on nine plays capped by a two-yard scoring strike to Brock Bowers for a 7-0 lead.

*Senior QB Stetson Bennett (25-for-37, 289 yards, 3 TDs passing 1 TD rushing, 2 INTs). Bennett had his seventh rushing TD (11th of career) too. He now has 53 career TD passes, good for fifth in school history. He led the offense to 28 points in the second half

*Redshirt sophomore Ladd McConkey (5 catches, 71 yards, 1 TD reception, 1 TD rushing) rushed a career-long 70 yards for a TD to put Georgia up 24-12 with 14:13 left in the 3rd. It was the second longest rushing TD by a Bulldog this year, trailing only tight end Brock Bowers 75-yarder versus Kent State. He added a 17-yard TD catch on the next possession to extend the advantage to 31-12.

*Junior TE Darnell Washington collected his first TD of the year, a two-yarder, and that was first TD catch since the 2021 SEC Championship Game. He finished with a career-high five catches for 60 yards and one TD.

*Junior Kendall Milton scampered 34 yards for the final TD. It was his fifth of the year and made it 45-19.

Red Zone Review: Georgia went 5-for-5 in the Red Zone with four TDs and one field goal. Coming in tonight, the Bulldogs led the nation in Red Zone offense, scoring 98 percent and now for the year are 55-for-56 (39 TDs and 16 FGs).

Points Off Turnovers: Georgia was minus two tonight in turnovers and is now minus two in Turnover Margin on the year. In the first half, the Bulldogs had one INT as Stetson Bennett was hit as he released the ball, it led to a three-and-out/punt. In the 3rd quarter, Bennett was picked off at the line of scrimmage at the UGA 22. It led to a TD. Opponents have scored 36 points off 13 Bulldog miscues.

Xavier Truss (LG) returned to the starting lineup after missing last week. He had started the first eight games this year.

Honoring The Greats: For the remainder of the season, Georgia will wear a special uniform patch honoring the legendary Bulldog coach and athletic director Vince Dooley who passed away Oct. 28 at the age of 90. Also, Georgia has helmet decals to honor one of the greatest athletes ever in Bulldog Charley Trippi, who passed away on Oct. 19 at the age of 100.