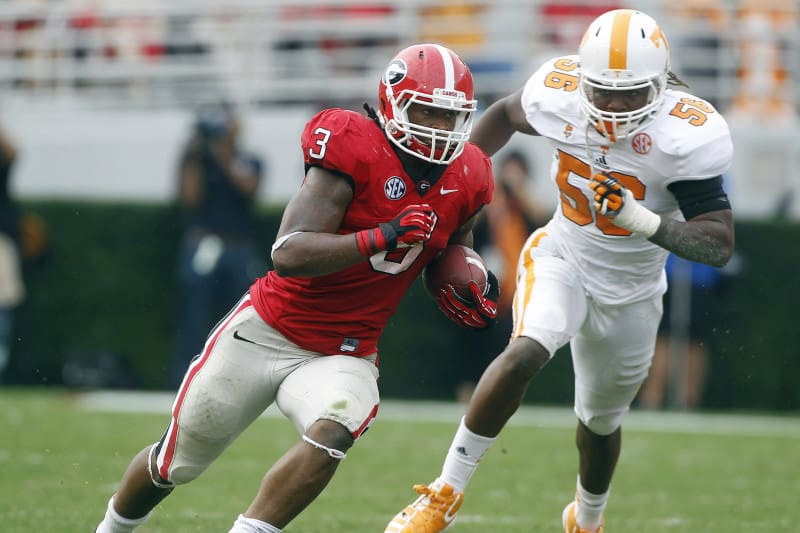 Ever since Herschel Walker ran between the hedges in the early 1980s, almost every running back for the University of Georgia has tried to match the standard by Walker after his three-year career where he ran for 5,259 yards and 49 touchdowns.

In 2012, the Bulldogs would get not one but two spectacular freshman running backs in Todd Gurley and Keith Marshall to form a duo that Georgia fans would nickname as “Gurshall”.
In the first four games of the 2012 seasons, the two running backs combined for 670 yards and 10 touchdowns with Gurley running for 406 yards and seven touchdowns while Marshall ran for 264 and three touchdowns.

Along with junior quarterback Aaron Murray, “Gurshall” had helped Georgia get off to a 4-0 start as they prepared to host the Tennessee Volunteers who came to Athens with a 3-1 record under third-year head coach Derek Dooley, son of former Georgia head coach Vince Dooley.

Even though in just his third season, Dooley was on the hot seat as the Volunteers had endured two losing seasons and had gone 0-11 against ranked teams during his short tenure.
A win over #5 Georgia could calm the storm as Dooley returned to the stadium where his father had coached from 1964-1988.

The Dawgs got the ball to start the game as they were able to drive 84 yards in 13 plays as Murray completed five of six passes for 54 yards while Gurley ran the ball five times for 32 yards including a two-yard touchdown run to put Georgia ahead 7-0.

Following a Tennessee three-and-out, the Dawgs had the ball at their 35-yard-line when Murray was intercepted by Volunteers free safety Byron Moore, who returned the pick for a 35-yard touchdown to tie the game at 7.

The tie would only last 19 seconds as on the next play after the ensuing kickoff, Murray handed the ball off to Marshall, who would run for a 75-yard touchdown to give Georgia a 14-7 lead midway through the first quarter.

The Vols would respond with a 10-play, 58-yard drive with the bulk of the yardage coming on two passes as quarterback Tyler Bray hit Zach Rogers for 22 yards and Rajon Neal for 12 yards to set up Derrick Brodus’ 34-yard field goal that cut Georgia’s lead to 14-10 with 2:39 left in the first quarter.

Back came the Dawgs with an eight-play, 75-yard touchdown drive which featured Murray completing passes of 21 yards to tight end Jay Rome and 31 yards to Tavarres King which would lead to Gurley’s one-yard touchdown run that increased the Georgia lead to 21-10 with five seconds to go in the opening quarter.

Tennessee would start its next drive at their 22-yard-line as it would move 17 yards until Bray was intercepted by Georgia cornerback Damian Swann to give the Dawgs the ball at their 44-yard-line.

After a five-yard run to start the drive, Gurley would get the ball again and knife his way through the Tennessee defense for a 51-yard touchdown run.

Marshall Morgan would miss the extra point to keep it 27-10 in favor of Georgia with 11:48 remaining in the second quarter.

The Dawgs would force the Vols to punt on their ensuing possession but would get the ball back at their one-yard-line after Malcolm Mitchell allowed the punt to roll past him.

The Dawgs would go three-and-out to give the ball back to the Vols at the 50-yard-line as Tennessee would drive 50 yards in 10 plays as linebacker A.J. Johnson lined up as a running back and punched  it in for a one-yard touchdown to cut the Georgia lead to 27-17 with 4:53 left before halftime.

The Tennessee defense would give its offense a golden opportunity to cut into the Georgia lead when on the Dawgs’ second play of their ensuing possession, Murray was sacked by Tennessee linebacker Herman Lathers, who knocked the ball loose leading to a recovery by Johnson at the Dawgs’ eight-yard-line.

Three plays later, the Vols were back in the end zone as Bray found Rogers for a four-yard touchdown which cut th

Tennessee would keep the momentum going as the defense would force another turnover when linebacker Curt Maggitt hit Marshall so hard it forced a fumble that was recovered by defensive end Darlington Sentimore to give the Vols the ball at the Georgia 18-yard-line with a chance to take the lead.

The Vols would take their first lead of the game as Bray connected with Neal for a 10-yard touchdown to give Tennessee a 30-27 lead with 42 seconds left before halftime.

Having given up 20 straight points in a span of four minutes and 11 seconds, the Dawgs looked to get some points on the board before the halftime break as they began their next possession at their 35-yard-line.

Murray would find tight end Arthur Lynch for 16 yards, followed by a 10-yard pass to wide receiver Michael Bennett, and then a seven-yard pass to Rantavious Wooten to give Morgan a chance at a 50-yard field goal with four seconds to go.

Morgan would calmly make the kick to send the game into halftime with both teams tied at 30.

After forcing the Vols to punt on their opening possession of the second half, the Dawgs got the ball at their at their 31-yard-line as Murray would complete a 38-yard pass to Lynch to put Georgia at the Tennessee 31-yard-line.

Gurley would run the ball three straight times, picking up 22 yards until Murray snuck for a 1st down at the Tennessee eight-yard-line from where Murray would hit Bennett for an eight-yard touchdown to put Georgia back on top 37-30.

Georgia would begin its next possession in Tennessee territory after free safety Mark Deas blocked a punt to give the Dawgs the ball at the Vols’ 47-yard-line.

Three runs by Gurley for 14 yards would lead to Murray’s 32-yard touchdown pass to Bennett which increased the Georgia lead to 43-30 as the extra point would be blocked.

The Vols would end the 16-0 Georgia run on their next possession with a five-play, 78-yard drive that was capped off with a 46-yard touchdown run by wide receiver Cordarrelle Patterson to bring Tennessee to within a touchdown at 43-37 with 4:13 left in the third quarter.

Georgia would start its next drive at their 19-yard-line where after a clipping penalty pushed the Dawgs back to their 10-yard-line, Murray would complete a 18-yard pass to Wooten to set up 2nd & 1 when Marshall broke loose for his second touchdown of more than 70 yards as his 72-yard touchdown run plus Murray’s two-point conversion pass to Mitchell increased the Dawgs’ lead to 51-37 with 3:06 to go in the third quarter.

It seemed that the Vols were going to cut into their lead following a 62-yard pass by Bray to tight end Mychal Rivera put Tennessee at the Georgia 15-yard-line.

However, the Vols would only pick up four more yards leading them to settle for a 28-yard field goal attempt by Brodus which sailed wide left and no good to keep it 51-37 in favor of Georgia as the third quarter came to an end.

Following a Georgia three-and-out, the Vols got the ball back at their 40-yard-line where they put together a 13-play, 60-yard drive that was capped off with a nine-yard touchdown run by Neal that cut the Georgia lead in half to 51-44 with 8:56 left in the fourth quarter.

After another Georgia punt, the Vols got the ball at their 28-yard-line as Neal got his hands on the next three plays picking up 22 yards to put Tennessee at the 50-yard-line when Bray was intercepted by Georgia cornerback Sanders Commings to give the Dawgs the ball at their 36-yard-line.

The Dawgs would go three-and-out to give the ball back to the Vols who took over at their 26-yard-line with 4:06 remaining in regulation.

The drive would begin with an incomplete pass followed by a 12-yard completion to Rivera for a 1st down at the Tennessee 38-yard-line.

A two-yard run by Neal and an incomplete pass set up 3rd & 8 when Bray connected with Patterson for 11 yards and another 1st down at the Georgia 49-yard-line.

A two-yard pass to Rogers followed by a 20-yard pass to Patterson put the Vols at the Georgia 27-yard-line when a false start penalty pushed them back five yards to the 32-yard-line to set up 1st & 15.

That is when Georgia linebacker Jordan Jenkins stripped Bray of the ball leading to a fumble that was recovered by nose tackle John Jenkins to give the Dawgs the ball at their 31-yard-line with a chance to run out the final 82 seconds.

The Dawgs would be unable to pick up a 1st down to ice the game and forced to punt back to the Vols who took over at their 35-yard-line with 15 seconds left to pull off a miracle and force overtime.

However, Commings would pick off Bray for the second time in the fourth quarter allowing Georgia to take a knee and run out the clock as the Dawgs came away with the 51-44 win.

The loss to Georgia would kick off a four-game losing streak for the Vols as they would finish the season with a 5-7 record earning them their third straight losing season which resulted in the firing of Dooley as head coach.

The Dawgs would lose that game in a 32-28 heartbreaker as they were five yards away from the game-winning touchdown as time expired.

Georgia would be invited to the Citrus Bowl where they would defeat the Nebraska Cornhuskers 45-31 to finish the season with a 12-2 record and with a #4 ranking in the final coaches poll and #5 ranking in the final AP poll as “Gurshall” would finish the season with a combined 2,144 rushing yards and 25 touchdowns(Gurley-1,385 + 17 TDs, Marshall-759 + 8 TDs).

Sadly for “Gurshall” its best season would be its first as Marshall would suffer a devastating ACL injury the following season ironically against Tennessee that would dampen his career at Georgia as he would run for a combined 640 yards in his final three seasons while Gurley would for 1,900 yards over his next two seasons before being selected by the St. Louis Rams in the first round of the 2015 NFL draft.