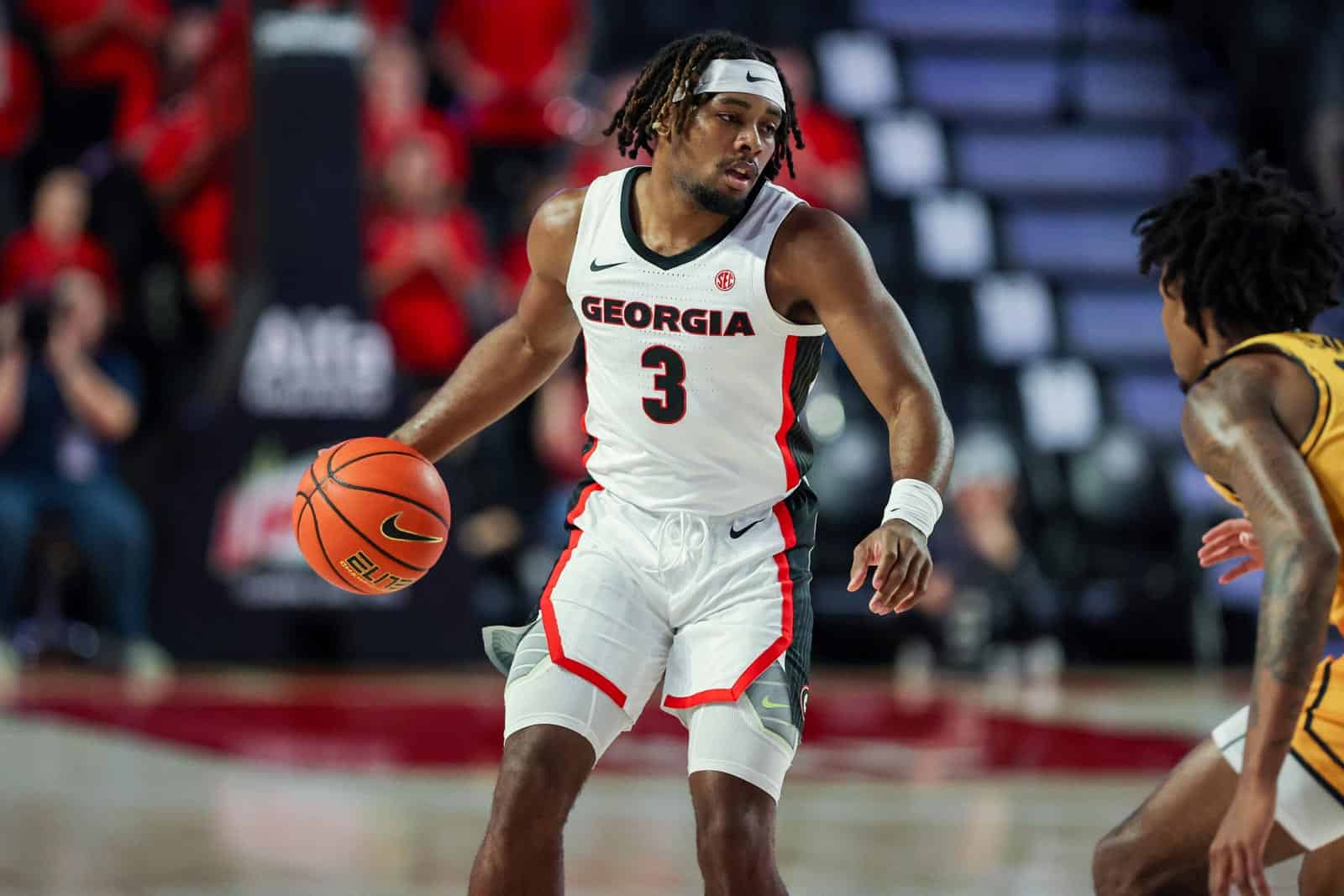 UGA had a season-best 15 assists on 26 made shots, while also recording its season low in turnovers with 14. Terry Roberts had a team-high six dimes, also adding 12 points, six rebounds and four steals. The Bulldogs also made a season-best nine three-pointers from five different players, led by Kario Oquendo with 16 points on an efficient 4-of-8 from beyond the arc.

“Good win for us – could’ve gone either way,” said head coach Mike White. “The final score wasn’t really indicative of how competitive the game was, in my opinion. ETSU is very good. I thought their attention to detail defensively was really high. … (We) played a bunch of different guys. I thought we had really good contributions from a few guys off the bench. Justin Hill continues to progress. I thought both bigs that came off the bench did a bunch, not necessarily showing in the final box score as much as it could have. I thought we responded to the halftime chat defensively. I thought we were pretty sharp defensively in the second half, probably our best second half, so that’s a positive.”

Roberts, the team’s leading scorer, opened the game offensively for the Bulldogs, knocking down a three-pointer and a layup. A transition dunk from freshman KyeRon Lindsey forced a timeout from the Bucs after Georgia took a 7-1 lead. ETSU quickly stormed back, though. Following a dunk from Roberts, the opponent scored 10 consecutive points, taking an 11-9 lead heading into the under-12 media timeout.

The Bulldogs managed to reclaim the lead when Oquendo and Jabri Abdur-Rahim sank back-to-back threes, taking a 17-15 advantage. Oquendo caught heat from deep, making another two three-point shots. The barrage of long balls turned into a 14-0 run for UGA, the longest uninterrupted scoring run for the Dawgs so far this season.

ETSU outscored Georgia 11-5 in the final minutes of the half, shrinking the Bulldogs’ lead to just four points, 30-26, heading into the break. UGA forced six ETSU turnovers in just over 14 minutes, leading to 11 of its points, but did not create any takeaways during the Bucs’ 11-5 run. Oquendo made three of UGA’s five threes, leading the team in first-half scoring with 11.

The Bucs tied the game after earning their fifth-straight basket in the paint off a layup from Josh Taylor. Georgia retaliated by going on a 12-point run that included a trio of treys heading into the under-12 media timeout. The final three-pointer of the surge made by Justin Hill with 12:27 remaining marked the ninth of the game for the Bulldogs, the most the team has made in a game this season.

With 14:15 remaining, Jaylin Ingram checked in for Georgia. It marked the senior’s return to action since suffering a season-ending injury in the Bulldogs’ win against Jacksonville last season on December 7, 2021. Ingram finished with a steal, a field goal attempt and a plus-minus of plus-nine in four minutes of action.

Hill continued a strong second half, scoring 12 of the team’s 32 second-half points on an efficient 4-of-7 from the field. The junior’s jumper before a pair of ETSU free throws gave Georgia an 11-point lead heading into the final media timeout.

Both teams would go on an offensive drought over four and a half minutes following Hill’s three. The teams’ stout defenses held through the remainder of the game, with only eight shots made by both teams over the final eight minutes. The Red and Black held a double-digit advantage throughout the remainder of the contest, winning its fifth game of the season with a 62-47 victory.

Georgia continues its three-game homestand in Stegeman on Wednesday, November 30, against the Hampton Pirates at 7 p.m. ET. The game can be found on the SEC Network+ streaming network. It will mark the first time the two teams have ever played each other.

• Series History – Today’s game marked the sixth meeting between the Bulldogs and Buccaneers – The all-time series between Georgia and ETSU is tied at 3-3.

• Return of the JI – Seventh-year FAU transfer, Jailyn Ingram, saw the court for the first time for Georgia. Ingram logged four minutes of playing time and produced a “plus/minus” of “+9.”

• Double Digit Dawgs – Kario Oquendo and Terry Roberts both recorded their fifth double-digit performances of the season this afternoon, while Justin Hill picked up his fourth. This marked the 40th career double-digit outing Hill, 29th for Roberts and Oquendo’s 28th.

• Extra Pass – The Bulldogs logged a season-high 15 assists on the night. This also marked the first game of the season that Georgia recorded more assists than turnovers.

• Super Charged – Jaxon Etter tallied his sixth charge in five games, upping his total to 36 in 36 games played dating back to the beginning of last season and 44 in the last 47 contests stretching back to the end of his sophomore season.

• Long Ball – Georgia registered a season high nine 3-pointers made on the afternoon. Coming into today, ETSU had the fourth longest streak with at least one 3-pointer made a game. The Bulldogs held them to 2-of-16 from beyond the arc, including zero first half threes.

• Super Kario – The junior from, Titusville, Fla. logged a season-high four 3-pointers – this marked his third career game with four plus long balls.

• Defense is Key – Today marked the first time a Georgia team has held an opponent to less than 50 points since the Bulldogs held Texas A&M to 48 points on Feb. 1, 2020. The Bulldogs also forced a season-high 17 turnovers, including 11 in the second half.

• Off the Bench – UGA tallied 27 points off of the bench to ETSU’s two. On the season, the Bulldogs’ bench now has a +132 scoring margin over its opponents bench players.

“Good win for us – could’ve gone either way. The final score wasn’t really indicative of how competitive the game was, in my opinion. ETSU is very good. I thought their attention to detail defensively was really high. (Jalen) Haynes was a handful for sure. The young guards are really good and play hard. They had us searching. (We) played a bunch of different guys. I thought we had really good contributions from a few guys off the bench. Justin Hill continues to progress. I thought both bigs that came off the bench did a bunch, not necessarily showing in the final box score as much as it could have. I thought we responded to the halftime chat defensively. I thought we were pretty sharp defensively in the second half, probably our best second half, so that’s a positive. I though Jaxon Etter gave us some good stuff, some energy. And lastly, I’m really happy for Jailyn Ingram. It’s been a long road for him in getting healthy and he’s been through a ton of adversity in his career, worked really hard. He’s had a great attitude. Our guys love him. They rally around him. He goes 0-for-1 in four minutes, he’s plus-nine, that’s unheard of. It kinds of speaks to the energy he gave us, the overall pickup of the aura in the gym. I thought he was tremendous.”

On Jailyn Ingram returning to play…
“I just thought we were flat. When you do put him out there for the first time, you’re experimenting—just to be honest and Jailyn knows that, we talked about that. You’re evaluating him and how he handles it because he didn’t have an intrasquad, a closed scrimmage, an exhibition. So, you’re tooth-and-nail against East Tennessee State—close game, early second half—and one of the guys on staff suggested it. The last few days he’s gotten to the point where we said, ‘We’re about ready to give him a chance in a game.’ Athletically, from a conditioning standpoint, he’s looked better and better, and this happened to be the one. It could’ve gone the other way of course, but he was an inspiration to his teammates. I thought he was probably the biggest factor in the game.”

On the first 10 minutes of the second half…
“We slowed our tempo a little bit, just kind of picked our spots. I know we were more sharp early in the second half. You’ll learn I’m not great at these when you go back 18 minutes ago. It’s been a long game. Early second half, in terms of how we scored it, Braelen (Bridges) had a couple baskets for us. Was that early, or was that mid-second half? Their rhythm offensively, I’d have to go back and watch the film. Top of my head, I liked our shot selection better second half than first half. I also thought first half, we took a few ‘my turns.’ We took a few ‘my turn to dribble’ when we’ve got Braelen or KyeRon (Lindsay) or MA (Moncrieffe) with a seal deep. I thought the difference between Haynes and some of our bigs, I thought that those guys did a really good job when he has post position of being willing and able to deliver it. We have to get better at that. We’re a better passing team than that, but a lot of times we catch it and say, ‘I want to go make a play off the bounce,’ or ‘It’s my turn to shoot.’ We have to get better at knowing what our shot for us is to max out offensively. We’re finding ourselves for sure, but we have a ways to go.”

On Justin Hill as a teammate …
“Justin is a great player. Me and J. Hill complement each other a lot. I love playing with him. He’s a Dawg. He’s a Dawg for sure.”

On offense-driven plays …
“Plays like that help us a lot. Those are hustle plays. They bring a lot of energy to us and motivation. It makes us want to go out there, get a steal and go harder.”

On how today’s game was different than most…
“I think we played better in the second half today. That is usually not the case. Usually, we play really good in the first half and then let up a little in the second half. I feel like we just need to get better at playing both halves and figuring out what it is we need to do to get a good jump start. When we played at Daytona last week, we had a great start in both of the halves so if we can get two halves, we would be a way better team.”

On differences from last year to the current team…
“I think emotionally we really want to be good. Not to say last year we didn’t, but it just didn’t work out. I think this year’s such an emphasis that we want to go out there and get better every single day.”

On the depth of the roster…
“I think having players that can come off the bench and play just as good as the starters do is for this team has to be key. We can’t come out here and think because you’re not a starter or you’re not playing as much today that you can let off the gas,’ cause if your number is called you have to go out there and play.”