Bulldogs hold off Wildcats in 16-6 win

Bulldogs hold off Wildcats in 16-6 win 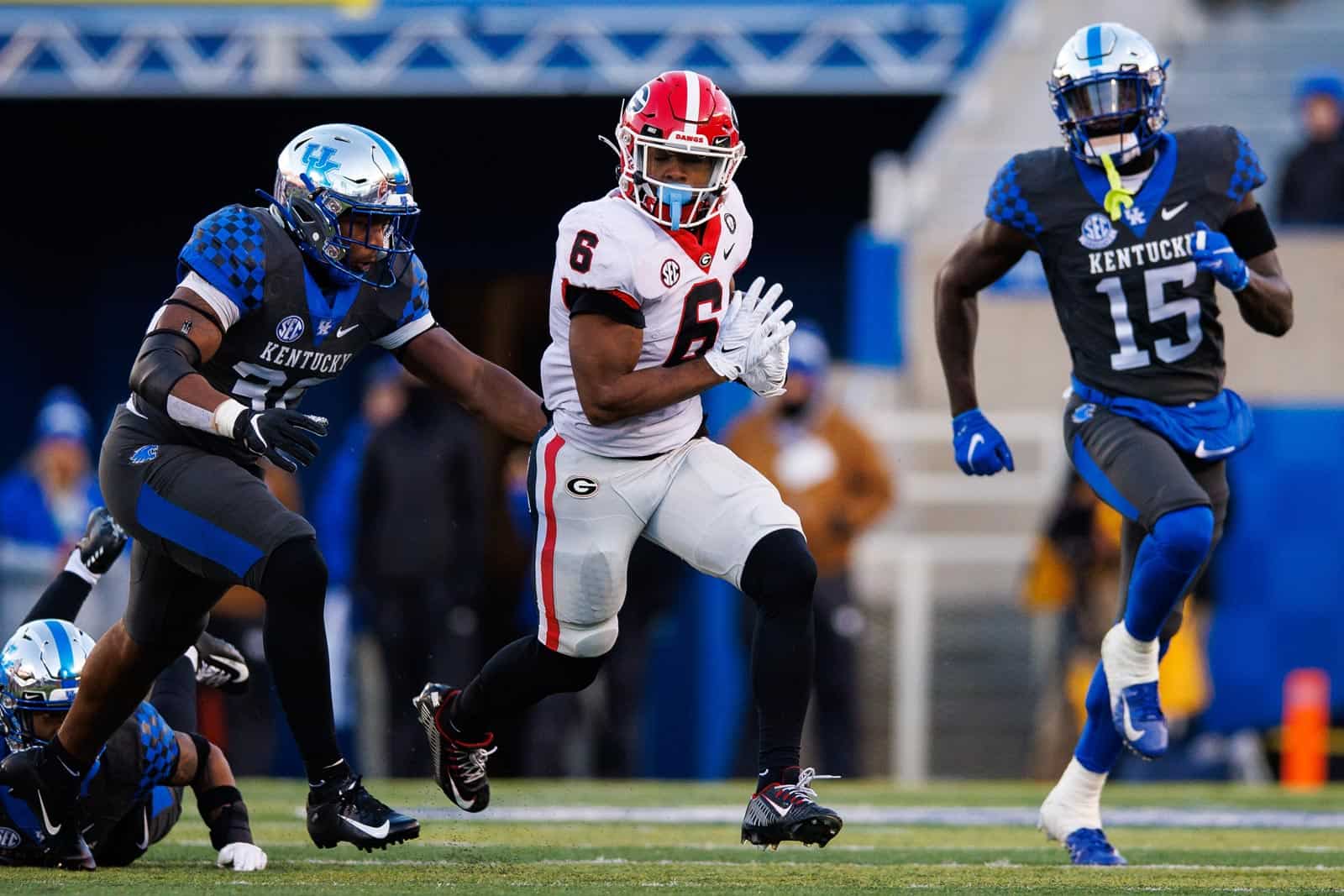 LEXINGTON, Ky. – Powered by a dominant rushing attack, the No. 1-ranked Georgia football team held off Kentucky, 16-6, on a cold Saturday afternoon at Kroger Field.

With the win, the Bulldogs clinched a second straight undefeated run through their SEC regular-season schedule. It was Georgia’s 13th win in a row over the Wildcats.

Kentucky (6-5, 3-5) got the ball first and drove down to the Georgia 31-yard line. The Bulldog defense stuffed the Wildcats on third-and-1 and fourth-and-1 to turn the ball over on downs. Georgia’s offense then drove down to the Wildcat 10 before settling for a 27-yard Jack Podlesny field goal and a 3-0 lead with 4:03 remaining in the first quarter.

Kentucky moved the ball deep into Georgia territory again on its second drive, but on third-and-12 at the UGA 18, cornerback Kelee Ringo intercepted Will Levis’ pass near the goal line and returned it 45 yards.. The Bulldogs quickly drove inside the 10-yard line, but the drive stalled there. Podlesny’s 24-yard field goal pushed the lead to 6-0 with 3:40 left in the first half.

Georgia’s defense forced a three-and-out on Kentucky’s next possession, giving the offense the ball back at the UGA 24 with 2:03 left on the clock. Bennett led the Bulldogs down to the Kentucky 20, and Podlesny put Georgia up 9-0 at the half with a 37-yard field goal as time expired. It was the fifth time this season that the Bulldogs didn’t allow any points in the first half.

Kentucky picked off a Bennett deep ball on Georgia’s drive to open the second half, taking over at the Wildcat 11. The Bulldog defense pushed the Wildcats backward on the ensuing drive, forcing a punt from the end zone.

Georgia started its next drive from its 42 and used its running game to get into the end zone for the first time. Kendall Milton ran for a combined 28 yards on the first three plays, Daijun Edwards had an 8-yard run, followed by a 4-yard reception, and then McIntosh did the rest. An 8-yard McIntosh run gave Georgia first-and-goal at the 10, and two plays later, he ran the ball in for a 9-yard touchdown and a 16-0 lead with 6:22 remaining in the third.

The Bulldogs’ next drive included a 35-yard pass from Bennett to Dominick Blaylock on third-and-6 at the Georgia 31. Later, on third-and-7 at the Kentucky 31, McIntosh ran left for 23 yards down to the 8 — the run put McIntosh over 100 yards rushing in a game for the first time in his career. On fourth-and-goal at the 1, on the first play of the fourth quarter, Milton was stopped short of the goal line.

Kentucky took over on downs at its 1 and drove 99 yards for a touchdown, scoring from the 8 on fourth-and-2. The Wildcats then went for the 2-point conversion and came up empty, making it 16-6 Georgia with 9:52 remaining.

The Wildcats forced the Bulldogs to punt for the first time on Georgia’s next possession. Brett Thorson’s boot, a 48-yarder, went out of bounds at the Kentucky 10 with 6:55 to play in the game. Kentucky then connected on a 47-yard completion on the first play of the drive, and proceeded to work its way down inside the Georgia 20.

On second-and-9 at the UGA 16, defensive back Javon Bullard sacked Levis for a 4-yard loss. Kentucky later missed a 38-yard field-goal attempt, giving the Bulldogs the ball back at their 20 with 4:17 remaining.

The Bulldogs were forced to punt on their next drive, and the Wildcats took over at their 25, with 2:32 left in the game. Georgia’s defense came up big one more time, stopping Kentucky and turning the ball over on downs with 1:17 remaining.

Georgia wrap up its regular season at home next Saturday against Georgia Tech. After that. the Bulldogs take on No. 6 LSU in the SEC Championship Game on Dec. 3 in Atlanta.

Bulldogs Complete Another Perfect SEC Regular Season: Top-ranked Georgia moves its record to 11-0 (8-0 SEC) with a 16-6 road victory over UK to post a perfect league mark for the second year in a row under Kirby Smart. They have gone 6-0 versus the East for the fourth time since 2017.

*Georgia has tallied at least 11 wins for the fifth time in the Smart era and 14th time overall in school history.

*The Bulldogs now have won 26 straight regular season games including their last 19 SEC games in that span.

Defense Comes Up Big Again: Georgia came in ranked 2nd nationally in scoring defense, allowing just 11.6 points a game while UK came in scoring 23.3 ppg. UK finished the first half with no points with 119 yards of total offense on 21 plays, holding the ball for 17:47. The Wildcats finished with 295 yards of offense on 56 plays. UK did have a 99-yard TD drive in nine plays in the 4th quarter.

*Georgia has posted 24 scoreless quarters this season and this was its fifth first-half shutout on the year.

*Georgia led 3-0 after the 1st quarter as the Bulldogs have not allowed a TD in the opening quarter this year (just three field goals).

*On UK’s opening possession, the Wildcats drove 64 yards in 11 plays and went for it at the UGA 31 on a 4th-and-1 and were stopped.

*RS-sophomore Kelee Ringo notched an INT at the UGA 2 on UK’s 2nd possession and returned it 45 yards. It was his 2nd this year and eighth by Georgia this season.

*The leading tackler was sophomore Smael Mondon who tallied 11 while sophomore Jamon Dumas-Johnson and freshman Malaki Starks were next with eight apiece.

*UK went 1-for-3 in Red Zone (INT by Kelee Ringo plus a TD and a Missed FG). Coming in today, Georgia ranked 3rd nationally in Red Zone Defense and now have limited opponents to scoring just 63% (15-of-24) of the time.

Points Off Turnovers: Georgia is minus two in Turnover Margin on the year. Today Kelee Ringo had a first half interception while Stetson Bennett threw an INT in the 3rd quarter. UK’s turnover led to a field goal. Georgia has scored 44 points off 12 turnovers. UK turned the UGA miscue into no points, going minus six yards in three plays. Opponents have 36 points off 14 turnovers.