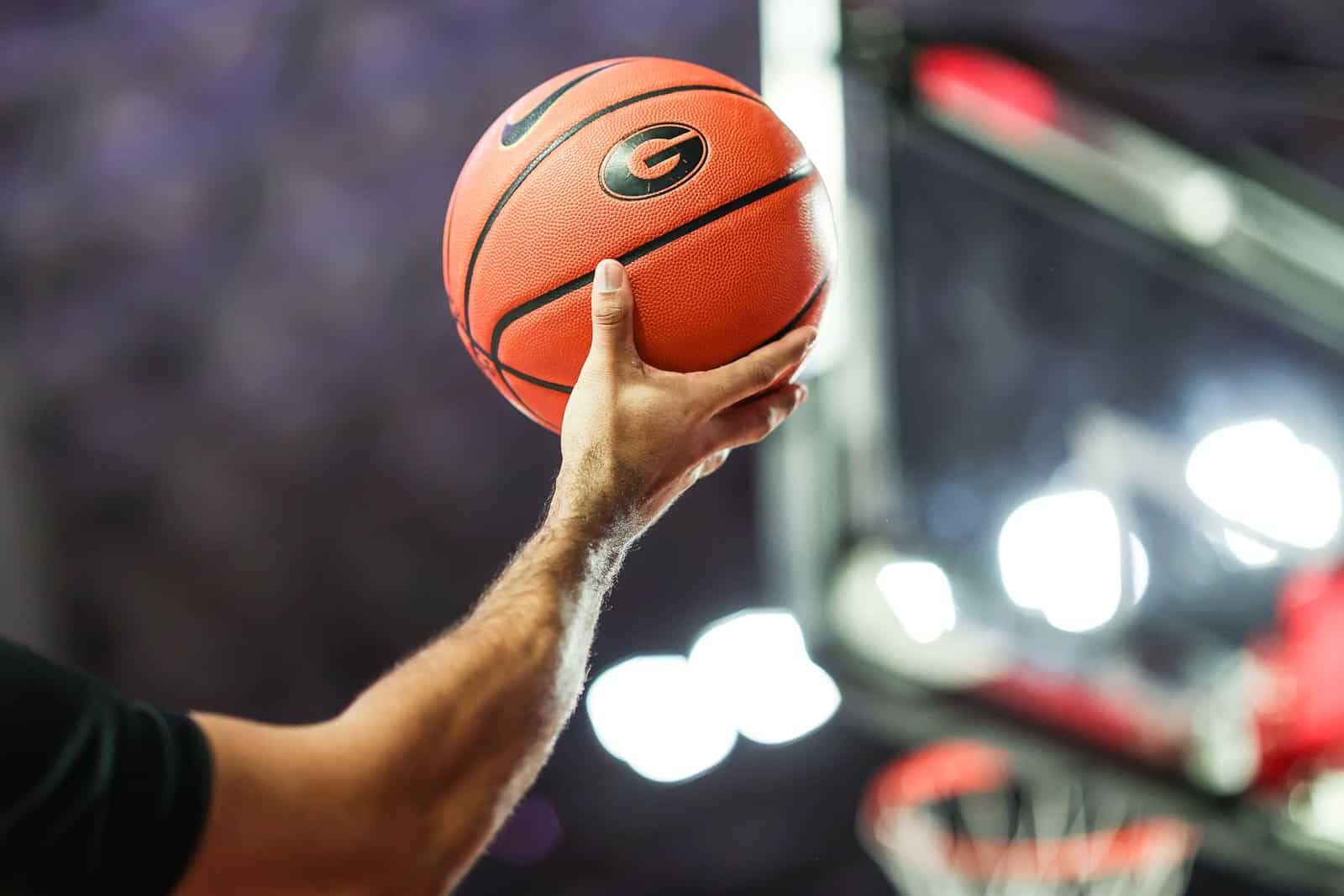 Photo: Mackenzie Miles/UGA
WINSTON-SALEM, NC. — Despite multiple valiant runs in the second half, the Georgia Bulldogs dropped its first game of the season to the Wake Forest Demon Deacons, 81-71, at the aptly named Lawrence Joel Veterans Memorial Coliseum during the Friday evening Veteran’s Day tilt.
The Bulldogs had four different players scoring in double figures. Terry Roberts led the way with 13 points, four rebounds, four assists and two steals, as Mardrez McBride added 13 points, including a trio of three-pointers. Also hitting the double-digit mark in scoring was Kario Oquendo with 12 points and KyeRon Lindsay with 10. The team shot an impressive 53 percent from the field in the second half.
“Credit to Wake Forest,” said head coach Mike White. “We’re on the road in the ACC, some of this is just mental toughness. They run the same thing in the first half, and you’re really crisp, fresh and you’re energized, and you guard the heck out of it. Then you find yourself down 12 points and you’re winded and it might be the same look, but you’re not as sharp, the communication might not be as sharp.”
The first half was all Wake Forest. Coming out of the first media timeout, Wake Forest went on a 9-0 run to create a 16-8 advantage after the first seven minutes of the game. The Demon Deacons’ strong offensive start was led by Daivien Williamson, who opened the evening with 15 of the team’s 26 points.
The Demon Deacons began with a strong defensive effort and gave Georgia a tough first half, getting six steals from the Bulldogs closed the first half while shooting just 30% from the floor. Georgia also had a tough opening frame defensively, allowing Wake Forest to attempt 13 free throws and make five three-pointers heading into the locker room, leading by a 41-22 score.
Out of the under-16 media timeout, McBride made another long ball and a pair of free throws followed by a KyeRon Lindsey alley-oop to go on a 7-0 run and cut the deficit to 16 points, 48-32. Georgia continued to extend its run thanks to a pair of threes and free throws, 15-3, prompting a Wake Forest timeout after getting the score to 51-40 with 12:37 to go.
The teams traded baskets over the course of the next four minutes after a defensive adjustment from the Bulldogs. Despite forcing two turnovers, Georgia could not convert the opportunities into points. Wake Forest managed to extend its lead once again after UGA’s empty trips, stopping the Red and Black scoring surge with timely buckets to again lead by 20.
However, Georgia was not done yet. It managed to shrink the lead once again, this time to single digits, following a 15-2 run that put the score at 71-62 with 2:07 remaining. The Bulldogs had a strong last-minute comeback that came just short, though, losing the game by an 81-71 final.
The Bulldogs will return home to Stegeman Coliseum for their next game, coming this Monday against the Miami (OH) RedHawks at 7 p.m. ET. The game will be televised on SEC Network+. This will mark the second time the two teams have met, previously playing on December 21, 2001, where Georgia was victorious by a 64-59 margin.
Keep up with all the latest news and information on the Bulldogs by following UGA Men’s Basketball on social media on Facebook, Instagram and Twitter @UGABasketball, and on the web at GeorgiaDogs.com.