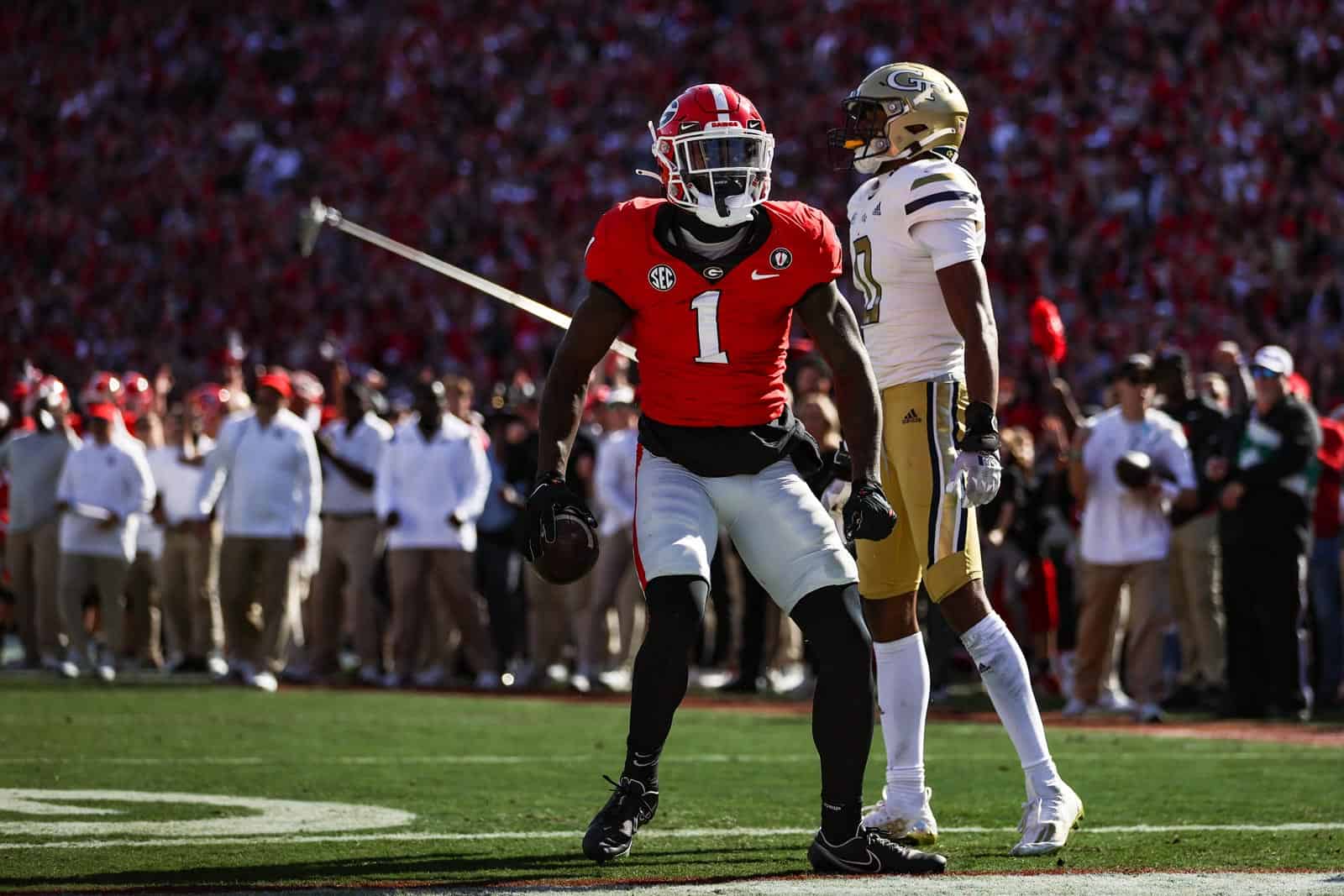 ATHENS, Ga. – With a 37-14 win over Georgia Tech on Saturday at Sanford Stadium, the top-ranked Georgia football team completed a second straight undefeated regular season. In addition, the 22 members of the Bulldogs’ senior class earned their 46th win, becoming the winningest class in program history.

Georgia (12-0) had to work for the victory, getting behind 7-0 and struggling to finish off drives against a spirited group of Yellow Jackets (5-7) playing under interim head coach Brent Key. During what was for a long time a low-scoring matchup on Dooley Field, kicker Jack Podlesny was pivotal, converting on field goals from 30, 50 and 36 yards. But then the Georgia offense got rolling and cruised to a blowout victory

Last year’s class had the school record for career wins, going 45-8, while this group is now 46-5. The seniors, including Podlesny, quarterback Stetson Bennett, safety Christopher Smith and more, were recognized before the game during the Senior Day festivities.

Another senior, running back Kenny McIntosh, had a big day rushing and receiving. He finished with 86 yards and a touchdown on the ground and two receptions for 96 yards, including an 83-yarder early in the fourth quarter during a 99-yard touchdown drive.

Georgia and its seniors will try for win No. 47 next Saturday when the Bulldogs take on No. 5 LSU in the SEC Championship Game in Atlanta.

It was the Yellow Jackets that struck first Saturday, taking the opening drive 75 yards for a touchdown. They converted a fourth-and-9 at the Georgia 41-yard line, connecting on a 34-yard pass, and quarterback Taisun Phommachanh later scored on a 7-yard run, putting Tech up 7-0 less than 5 minutes into the game. It was the first touchdown Georgia’s defense has allowed in the first quarter all season.

Georgia’s second offensive drive showed great promise, with Bennett making things happen with his arms and his legs. A 16-yard run gave the Bulldogs a first-and-goal at the 4, but Georgia eventually had to settle for a 30-yard Podlesny field goal that cut Tech’s lead to 7-3 with 18 seconds left in the quarter.

The Bulldogs took the lead, 10-7, with 7:59 left in the half on Bennett’s 5-yard touchdown pass to wideout Marcus Rosemy-Jacksaint. The drive began with a 45-yard run by McIntosh, the longest run by a Bulldog running back this season. Daijun Edwards added several runs, including an 18-yarder, before Bennett found his target on third-and-goal.

It was still 10-7 at the half, with Tech holding a 187-153 advantage in total yardage. Georgia got the ball to start the third quarter and appeared to score a long touchdown when Bennett hit Arian Smith in the back of the end zone, but Smith was ruled out of bounds and the call was upheld on review. Instead, Podlesny booted a 50-yard field goal to push the Bulldogs’ lead to 13-7.

The Bulldogs’ defense got a quick stop, and then Tech punter David Shanahan dropped the snap and was immediately surrounded by Bulldogs, resulting in a loss of 13 yards and Georgia’s ball on the Yellow Jacket 17. Bennett hit Bowers for a 10-yard gain and a first down at the 5, but Georgia’s first three cracks at the end zone came up short.

On fourth down from the 1, Bennett found Bowers in the back of the end zone for the score and a 20-7 lead with 5:51 left in the third. Soon after, Georgia’s offense was back on the field following a Tech fumble that was forced by Jamon Dumas-Johnston and recovered by fellow linebacker Robert Beal at the 25.

This time, Georgia’s offense couldn’t take full advantage of the turnover. Podlesny split the uprights from 36 yards out for his third field goal of the game and a 23-7 Bulldog lead with 4:11 remaining in the third. The offense’s next possession featured one of the offensive plays of the season, an 83-yard reception down the left sideline by McIntosh, down to the 2. He ran the ball in for his eighth rushing touchdown of the season on the next play, capping a 99-yard drive and putting Georgia up 30-7 with 13:45 remaining.

Running back Kendall Milton blew the game wide open after the defense turned Tech over on downs. Milton took off down the middle and scored on a 44-yard touchdown run that made it 37-7 with 11:13 to play. Tech added a 24-yard touchdown pass with 2:55 remaining, making it 37-14.

Bennett, in his final game between the hedges, finished 10-for-18 passing for 140 yards and two touchdowns. He also ran five times for 21 yards and used his legs to keep numerous other plays alive. Bowers finished with five catches for 20 yards and a touchdown, along with two carries for 4 yards. For the game, Georgia out-gained the Yellow Jackets 394-255.

Linebacker Smael Mondon led the defense with six tackles, including 1.5 for loss. Defensive back Tykee Smith was one of three Bulldogs with five tackles, and he also had 1.5 for loss. Georgia finished with four sacks and 11 tackles behind the line of scrimmage.

*The Bulldogs now have won 27 straight regular season games which is a school record.

A Review Of The Defense: Georgia came in ranked 2nd nationally in scoring defense, allowing just 11.1 points a game. Tech managed 14 points, however they were limited to just 68 yards on 26 plays in the second half. They finished with 255 yards on 64 plays.

*Trailing 7-3 after the first, the Bulldogs blanked Tech in the 2nd and 3rd quarters. Georgia has posted 26 scoreless quarters this year.

*Georgia surrendered its first touchdown in the first quarter this season as Tech went 75 yards in 4:17 for a 7-0 lead on its opening drive. The key play for Tech was a 34-yard completion on a 4th-and-9 from the UGA 41. Coming in, Georgia had allowed just nine points in the 1st quarter this season. In their remaining four drives of the first half, Tech was shut out and gained 112 yards.

*The leading tackler today was sophomore Smael Mondon with six while a host of Bulldogs had five apiece. Georgia had four sacks.

*With a 10-7 lead, Georgia took the 2nd half kickoff and extended its lead to 13-7 on a 50-yard field goal. Following a bad snap on a Tech punt attempt, Georgia started its next possession on the Tech 17 and punched it in for a TD on a 4th-and goal on a Brock Bowers ( 5 rec., 20 yards), caught a 1-yard TD.It was the fifth TD catch for Bowers and 18th of his career.

*Georgia had a 99-yard TD drive, the longest in the Kirby Smart era. Georgia needed only four plays in 2:23. The previous long was 98 yards on six plays in 2019 against Arkansas State. Today’s TD drive made it 30-7.

*Senior Kenny McIntosh had 86 yards on 12 carries with a season-long 45-yard scamper. Also, he had a career-long 83-yard catch.

*Today marked only the third time the Bulldogs trailed all year (@Missouri until 4:03 left in the game; vs. #1 Tennessee 3-0 in the 1st).

*Junior Marcus Rosemy-Jacksaint notched his second TD reception of the year and third of his career. It capped an 80-yard drive in six plays over 3:36 and put the Bulldogs in front 10-7 with 7:59 left in the 1st half. It was his only catch plus he recovered an onside kick.

*Freshman P Brett Thorson finished the first half with two punts, a 51-yarder and then a 36-yarder that was downed at the 2..

*RS-sophomore Ladd McConkey had 53 yards in punt returns including a career-long 39-yarder plus he downed a punt at the 2.

Points Off Turnovers: Georgia is minus two in Turnover Margin on the year. Georgia has scored 47 points off 13 turnovers.

Captains, Coin Toss and For Starters: Seniors Stetson Bennett, Chris Smith, Kenny McIntosh and Warren McClendon served as the captains. Georgia won the toss and elected to defer the ball untl the 2nd half. Along with 22 seniors recognized today, Georgia paid tribute to all current military personnel and veterans during the game. Former Bulldog great Richard Seymour was honored for his NFL Hall of Fame induction. Junior RB Kendall Milton had his first start of the year and just second of his career (1st came in 2020).

On going 12-0 in the regular season for the second-straight year…
“It’s hard to do. You schedule these games and you get everyone’s best every single week. This team just keeps
rising to the occasion. We came out a little flat, a little lethargic, you’re always worried about your team over
Thanksgiving because they take that break. But they answered the bell the second half. Georgia Tech helped us
with some turnovers, but there are so many things we need to work on to get better at. I wish we had played better.
I want to play better and that starts with us as coaches trying to get it better.”

On sending the 22 seniors out on a high note with a win inside Sanford Stadium…
“They set the tone. They set the standard, they lead. They’re the guys that when things aren’t going well at practice,
they step up and say that others need to take ownership in this program. They learned from a really good group last
year and they held the standard high. This senior class had 46 wins and that includes a year they only got to play
nine games, that’s incredible. That speaks volumes to the kind of character they have.”

On the things he liked about the defense, especially in the second half…
“I thought we controlled the run game. They didn’t try much to run the ball. They were really perimeter with
everything they did. Our guys played physical up front and dominated the line of scrimmage. It’s the way the game
is supposed to be played. We just have to be more consistent with getting turnovers and getting off the field on third
down.”

On what it looks like when Georgia plays its best football…
“I think we have had glimpses of it. We’ve have really good halves- whether that’s the first or second half. We
haven’t been there completely yet. We have to click and not turn the ball over and just play our game. Once we do
that it’s going to be awesome. We’re still ascending, that’s the plan. That’s what you have to do to compete late in
the season.

On the conversation at half time…
“Just go out and do it. It’s about fight. We knew it would be. Georgia Tech is a great team and they had a great
game plan. Keep fighting and come out and get the win.”

On Georgia Tech’s strong start to the game…
“I wouldn’t say they were more ready to go than we were but I would definitely say the things they were trying to do
schematically were definitely answers to a good amount of things that we were sending at them- throwing balls on
the perimeter, just good runs and good pass concepts and things like that. Being able to come back and find
answers to those is something that we need to be able to do.”

On the defense’s ability to make adjustments…
“Every single time we walk off the field, every single drive, we’re making adjustments on every single thing that
we’re able to see so that when we go out there the next time we’re definitely in a better position.”