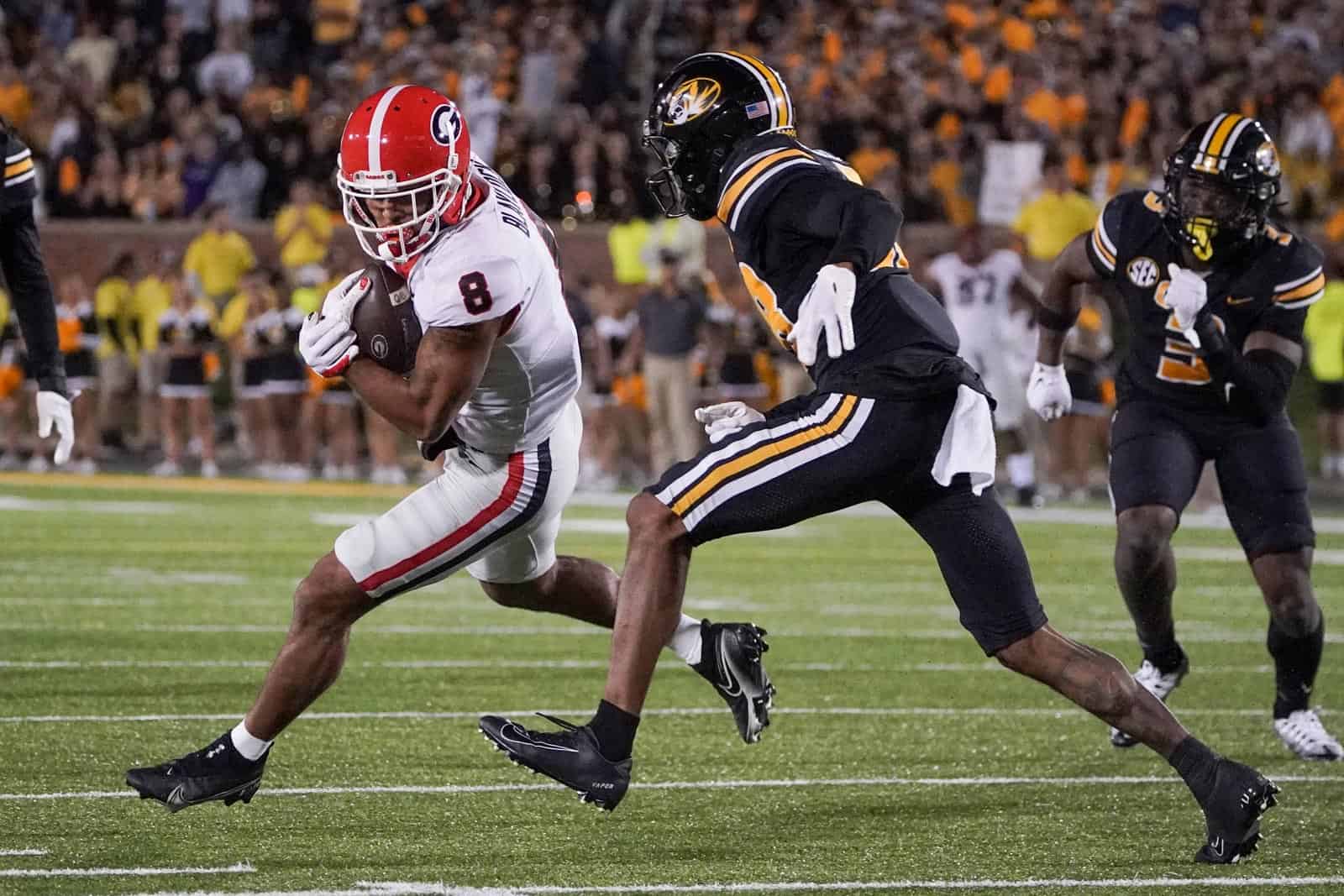 On the defensive end, Georgia held Missouri (2-3, 0-2 SEC) to 294 yards of total offense. Sophomore linebacker Jamon Dumas-Johnson led the team in tackles with eight, including one tackle for loss, while Athens area native Malaki Starks posted six tackles and a pass breakup.

Missouri won the toss and deferred the option to the second half. After a slow start offensively for both teams, the Tigers struck first on a 41-yard field goal by Harrison Mevis. This marked the first time the Bulldogs had trailed an opponent during the season. Georgia entered the second quarter trailing Missouri 3-0.

The Tigers added to their lead in the second quarter, on a nine-play, 81-yard drive that resulted in a 10-yard Tyler Stephens touchdown catch. After driving to around midfield, a mishandled handoff by Bennett led to a fumble recovered by Missouri on the Georgia 42-yard line. Missouri added to its lead thanks to a 49-yard field goal from Mevis, his second of the night.

The Bulldogs finally got on the board in the second quarter, thanks to an eight-play, 52-yard drive that resulted in a 40-yard field goal by senior placekicker Jack Podleny to make it a 13-3 ball game. The Tigers quickly responded with another Mevis field goal, after a seven-play, 71-yard drive to retake a 13-point lead.

After stalling offensively, Georgia set up to attempt a 44-yard field goal, however, the Bulldogs successfully ran their first fake field goal since the 2020 Sugar Bowl as Bennett scrambled up the middle to extend the drive. Georgia tacked on a 34-yard field goal by Podlesny to cut to deficit to 10 heading into the half.

Coming out of the locker room, the Bulldogs’ defense forced the Tigers to a quick three-and-out. Georgia’s offense responded with a 16-play, seven-minute drive that resulted in a 28-yard field goal from Podlesny to cut the Missouri lead to single digits. The Tigers answered with another Mevis field goal, this time from 52-yards out. Georgia responded 29-yard field goal, but again Missouri’s Mevis knocked a 56-yard field goal to give the Tigers a 22-12 lead at the start of the fourth quarter.

Georgia finally broke into the end zone in the middle of the fourth quarter on a Kendall Milton 1-yard touchdown run that capped off a 10-play, 75-yard drive to draw within three of Missouri. With four minutes remaining in the fourth quarter, the Bulldogs took their first lead of the game (26-22) thanks to a seven-play, 68-yard drive that resulted in a Daijun Edwards 1-yard touchdown run.

The Bulldogs’ defense stood tall when asked and forced a key three-and-out. With three minutes left in the game, Georgia remained true to the run game and bled the clock out. The win marked Georgia’s first double-digit come-from-behind win since the Bulldogs beat Oklahoma 54-48 in the 2018 Rose Bowl Game.

Georgia returns home next weekend to face Auburn in the 127th rendition of the Deep South’s Oldest Rivalry on Saturday, Oct. 24 at 3:30 at Sanford Stadium. The game will be broadcast on CBS.

Offense Held To Field Goals In First Three Quarters And Then Rallies With TDs In Fourth: Top-ranked Georgia fell behind 13-0 with 8:53 left in the first half and were down by 10 points in the final quarter before rallying for a 26-22 victory over the Tigers.

Senior PK Jack Podlesny accounted for 14 points with four field goals and a pair of PATs. Georgia’s first points cut it to 13-3 in the second quarter. Two key plays on the drive included converting a 3rd-and-9 play with an 18-yard completion by senior QB Stetson Bennett to junior WR Dominick Blaylock and a 33-yard reception by sophomore TE Brock Bowers. Georgia failed to score in the first quarter for the first time since last year’s national championship game as Alabama led 3-0 before the Bulldogs came back for a 33-18 victory. The Tigers led tonight 3-0 after the first quarter. Georgia finished the first half with 182 yards of offense on 35 plays.

Bennett finished the night 24-for-44 for 312 yards with Bowers his leading receiver (5-for-66 yards). Georgia had 480 yards of total offense on 80 plays. Georgia improves to 11-1 all-time in the series with Mizzou including 6-0 in Columbia.

The Last Time: Georgia executed a fake field goal as Stetson Bennett rushed for five yards on 4th-and-3 at the Mizzou 22. It was the team’s first since the 2020 Sugar Bowl when Georgia’s Jake Camarda ran for a first down. Tonight’s drive ended with a 34-yard FG. The last time Georgia trailed at the half was last year’s national championship game to Alabama 9-6 and then rallied for a 33-18 win.

A Look At The Defense: The Tigers tallied 294 yards of total offense on 53 plays and were held to just one TD and five field goals.The Bulldog defense forced a three-and-out to open the second half and again once Georgia grabbed its first lead of the contest in the fourth quarter. The Tigers hit a 41-yard field goal with 4:11 left in the first quarter for a 3-0 advantage, marking the first time Georgia had trailed this season.  Junior DL Jalen Carter returned to action on defense in the 2nd quarter and then left with a knee injury and did not return. Mizzou put together an 81-yard drive in 12 plays for a 10-0 lead with 12:43 left in the second quarter. Cody Schrader’s 63-yard scamper was the longest play allowed by the Bulldogs this season, and it led to a field goal and a 16-3 advantage.Georgia entered the game ranked fourth nationally in Scoring Defense, surrendering just 8.0 points a game. The leading tackler for the Bulldogs was Jamon Dumas-Johnson with a career-high eight stops while freshman Malaki Starks was next with six.

Points Off Turnovers: Missouri scored three points off two Bulldog miscues while the Tigers did not have any turnovers in the first half.

Junior RB Kendall Milton fumbled after a 35-yard gain and Mizzou recovered at the UGA 46. It did not lead to any points as the Tigers ran three plays and lost one yard total. Senior QB Stetson Bennett fumbled and Mizzou took over at the UGA 36. It led to a 49-yard field goal. The Bulldogs are now +2 for the year with 31 points off turnovers while opponents have scored 13 points off five turnovers. Last week against Kent State, the Bulldogs had three turnovers in the first half that led to three points.

For Starters, Game Captains: Georgia had one first-time starter in junior DB Tyke Smith as this was his first at Georgia and 18th in his career after having 17 starts while at West Virginia. Also of note, redshirt sophomore WR Arian Smith saw his first action of the season after getting hurt in fall camp. He had a 7-yard catch in the second quarter. Missouri won the toss and elected to defer the ball until the 2nd half. Sophomores Jamon Dumas-Johnson (LB) and Brock Bowers (TE) plus juniors Marcus Rosemy-Jacksaint (WR) and junior Dan Jackson (S) were the captains.

On Playing on the road in the SEC…

It’s never easy. We tried to convince our guys all week. We played together. We stayed together. We showed two of our core DNA traits tonight. Resiliency and composure. It took all of the resiliency and composure we had in us to win tonight, I can promise you that. Give Missouri a lot of credit. They created a lot of difficult situations for us offensively and they played really hard. We did not do a great job executing. We missed some layups and they took advantage of those, but I couldn’t be prouder of our guys. At halftime I told our guys, ‘when we come back in here, we are going to be celebrating because we won this game’. We had a hell of an opportunity and every single one of them believed.”

“Can do that on the road. The atmosphere. We had a field position battle here early in the game. We were backed up every drive and we couldn’t get going. It gave them momentum and gave their fans a reason to be in the game. They came into this game probably doubting themselves and came out feeling real good. We helped them with that… We can’t turn the ball over and be an effective offense. Defensively we can’t give up the explosives. We had a couple of young guys bust on defense, but our defense rose up in the red area.”

On the physicality of Missouri…

“They did a great job of being bear front. Mixing their fronts. They knocked us back up front. We didn’t get doubles. We didn’t get guys moved off of the ball, and then we didn’t hit our perimeter plays. We didn’t have much of a threat outside, to get vertical. They just had a lot of momentum. Eventually, we wore them down. I feel like we could run the ball in the fourth quarter against a loaded box. They had extra guys in the box. But, we have to be able to do that earlier in the game.”

On finishing the game with the offense on the field…

“That was big. We do that every Friday. We say, ‘we need two first downs’. They had everybody up there, what are we going to run? Our offense does an elite job at executing that. Once we got the ball back from the (Missouri) punt, I knew we weren’t giving this ball back to them. We execute that really well and I thought (Todd) Monken called that great. I thought our offensive line dominated and little Daijun Edwards man. He took the game over in the last four or five carries.”