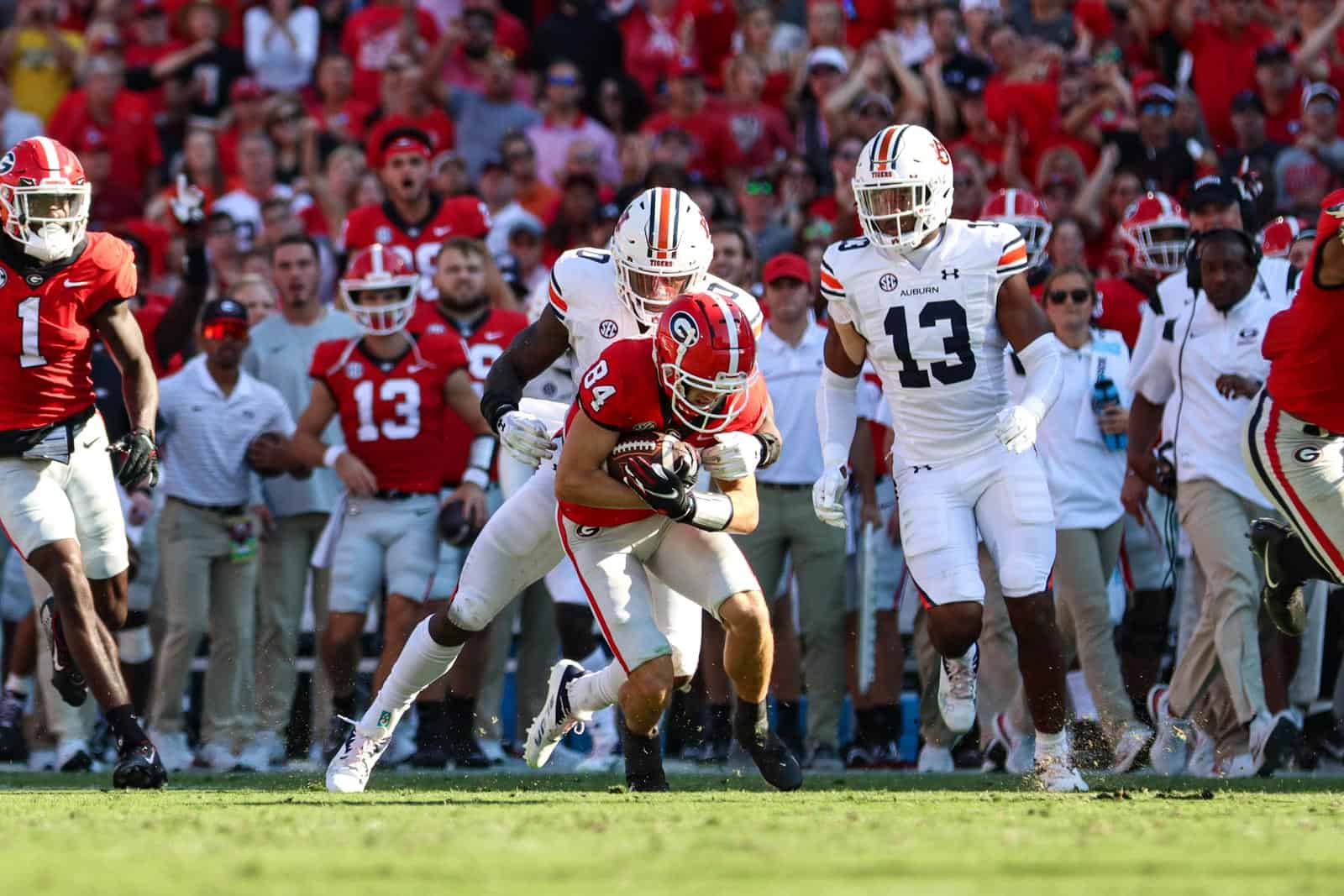 ATHENS, Ga. — Behind a very strong effort from its defense and a powerful and productive rushing attack — with three touchdowns by Daijun Edwards and a 64-yard, fourth-quarter touchdown run by quarterback Stetson Bennett — No. 2 Georgia knocked off Auburn, 42-10, Saturday afternoon at Sanford Stadium.

In the Deep South’s oldest football rivalry — Saturday was their 126th meeting — it was an old-school football match, with lots of runs and stuffed runs and very few aerial fireworks. Georgia ran for 292, amassed 500 yards of total offense, held Auburn to 258 yards of total offense, and got big third-down stop after big third-down stop — Auburn was 5 of 17 on third down.

Georgia has now won the last six meetings in the series, dating back to the SEC Championship Game in 2017. Georgia also added to its narrow lead in the overall series against Auburn, improving to 63-56-8. In a series full of quirks, the Bulldogs are now 17-18 all-time against the Tigers in Athens and have an 18-12-2 record at Jordan-Hare Stadium.

Georgia (6-0, 3-0 SEC) got its first points of the game with the help of Auburn’s aggression. Late in a scoreless first quarter, the Tigers (3-3, 2-2)  ran a fake up on fourth-and-6 at the Tiger, but the Bulldogs’ Nolan Smith stopped up-man John Samuel Shenker’s rush well short of the first down.

That gave the Bulldogs the ball on the Tiger 36. On the next play, Kenny McIntosh stopped-and-started his way to a 9-yard run. Two plays later, Daijun Edwards powered his way down to the 6, and then ran down to the 1 on the next play. On third-and-goal, McIntosh capped the drive with an untouched run into the end zone on a toss sweep. The game’s first points gave Georgia a 7-0 lead with 11:42 to play in the half.

The Bulldog defense quickly forced another Auburn punt, and this time returner Ladd McConkey put the offense in a great spot. McConkey fielded the punt, took off up the left side and ended up with a 38-yard return. On first down at the Auburn 31, back Branson Robinson ran left 23 yards to the 8.

Ladd McConkey with a 38-yard punt return to the Auburn 31. On first down, emerging tailback Branson Robison took off down the left side to the 8, a 23-yard gain. Two plays later, Edwards ran the ball in from the 1, putting Georgia up 14-0 with 8:45 remaining in the second quarter.

Georgia had a couple more good chances for scoring drives later in the half but came up empty. At the break, Georgia led 14-0 thanks to another strong defensive showing and to a solid ground game that gained 118 yards and averaged 7.4 yards per rush.

The Bulldogs go the ball to start the third quarter, but a third-down sack and strip of Stetson Bennett was recovered by the Tigers at the Georgia 19-yard line. Georgia’s defense again held firm, holding Auburn to a 29-yard Anders Carlson field goal that cut the lead to 14-3 with 11:51 left in the third.

Georgia pushed its lead to 21-3 midway through the third following a long, 11-play drive that culminated in a 2-yard touchdown run by Edwards. On third-and-6 at the UGA 39, the Tigers jumped offsides and on the free play Bennett hit McConkey for a 21-yard gain. Soon after, Edwards scored his second TD of the game.

Bennett called his own number on the first play of the fourth quarter and all but sealed the victory, taking off up the middle and sprinting his way by the defense on a 64-yard touchdown run that made it 28-3 with 14:49 left in the game. It was the longest play of the game and Bennett’s longest run of his Georgia career.

Edwards added a third touchdown run with 11:10 remaining, this one from 7 yards out to make it 35-3. Edwards had three career touchdowns — two last season and one in 2022 — coming into Saturday’s game.

Auburn scored a 62-yard on its next possession, taking advantage of a busted coverage, to cut the lead to 35-10 with 9:51 left on the clock. Georgia answered right back, converting a third-and-15 in Auburn territory on a Bennett 18-yard pass to Oscar Delp, and then Branson Robinson ran the ball in from the 15 for his first career touchdown, and a 42-10 lead with 4:45 remaining.

The Bulldogs are back on Dooley Field next Saturday, when they host Vanderbilt at 3:30 p.m.

Bulldogs Notch Another Win: Second-ranked Georgia improves to 6-0 (3-0 SEC) with a 42-10 home victory over Auburn.
*Georgia now has won six in a row in the Deep South’s oldest rivalry and leads the AU series 63-56-8.
*Head coach Kirby Smart is 7-1 against the Tigers including 4-0 in Athens. Overall, the Bulldogs are 34-4 at home under Smart.

Defense Dominates Again: The Bulldog defense limited the Tigers to only 10 points with 258 yards of offense on 63 plays.
*Georgia entered the game ranked fourth nationally in Scoring Defense, surrendering just 10.8 points a game.
*For the third time this season, the Bulldogs blanked a team in the first half (Samford and @South Carolina).
*The Tigers recovered a fumble at the UGA 19, and Georgia held Auburn to a field goal to make it a 14-3 game in the 3rd quarter.
*Auburn’s lone touchdown came on a 62-yard TD pass to running back Jarquez Hunter that made it 35-10 with 9:51 left in the game.
The leading tackler today was sophomore linebacker Jamon Dumas-Johnson with five stops to give him a team-leading 29.

Red Zone Review: Georgia went 5-for-5 in the Red Zone with five TDs. Auburn was 1-for-1 with a field goal.
*Georgia improved to 35-for-36 in scoring in the Red Zone this season with 24 TDs and 11 FGs on the year.

A Look At The Offense: Second-ranked Georgia came in averaging 39 points a game and posted a 42-10 win over Auburn
*Georgia finished the game with 500 yards of offense on 71 plays, In the first half, the Bulldogs had 143 yards on 29 plays and led 14-0.

Special Teams: *Freshman P Brett Thorson punted five times (41.4 avg) and placed all five inside-the-20 giving him eight this year.
*In the first half, Georgia stopped a fake punt as Auburn tried one on a 4th-and-6 at the AU34. The Tigers gained just two yards. The Bulldogs took over and turned it in to a TD and a 7-0 lead with 11:42 left in the half.
*Redshirt sophomore Ladd McConkey notched a career-high 38-yard punt return to the AU 31. It led to a TD and a 14-0 lead
* Senior PK Jack Podlesny entered today’s game fourth nationally in scoring with 58 points. Today, he had six points, all on PATs.

Points Off Turnovers: Junior DL Zion Logue recovered the first fumble of his career at the UGA 38. It led to a punt.
*Auburn forced a fumble on a scramble by QB Stetson Bennett and took over at the Georgia 19. It led to a 29-yard field goal.
*Georgia is +2 in Turnover Margin this season. Opponents have scored 16 points off six Bulldog miscues.
For Starters, Captains & Helmet Stickers: Georgia had one first-time starter in junior Rian Davis (ILB) with a career-high four tackles.
*Sophomore Jamon Dumas-Johnson (ILB), senior Kenny McIntosh (RB), senior Nolan Smith (OLB) and junior Darnell Washington (TE) were the captains.
*In partnership with Hilinski’s Hope, the Bulldogs wore green ribbon helmet decals with the number three as part of College Football Mental Health Week. Georgia won the toss and elected to defer the ball until the 2nd half.

On the environment the fans brought for the SEC home opener against Auburn…
“I knew from the start, when I came out I checked the raptors. The first thing when I run out of the tunnel, I look up high and make sure there are no empty seats. And there were no empty seats today, which is indictive of our fanbase and the support they provide us. I thought the 12th man, the fans, really had a factor in the game early. Their offense was stagnant, they couldn’t get things going. We were a little slow starting offensively but we came around. It’s never easy in the SEC. I was proud of our fans and proud of our kids.”

On dominating the line of scrimmage and paving the way for 292 yards rushing…
“Proud of Stacy Searels. He’s a great O-line coach as you know. He’s an Auburn alum. He takes a lot of pride in being physical and running the ball. Our guys responded to the challenge of the line of scrimmage game and really ran the ball hard. I thought our backs gave us a lot. Kendall (Milton) got dinged up in the game and we had to use Branson Robinson more and he stepped up and provided a little juice.

On Georgia’s defensive pressure up front…
“Pressure up front was great. I thought our guys were disruptive. I thought Coach Schumann and the defensive staff had a good plan to flush him (Auburn quarterback Robby Ashford), but man he is tough when he gets out of there.”

On what he saw in his big run after dropping into the pocket…
“That was just a draw play. It’s just a quarterback run, I had an RPO on both sides, read it, liked the numbers and just
took off.”

On how the team views this win…
“I think we got to do a better job about that. I think we do let people tell us how we should feel about a 42-to-10 SEC
victory against Auburn. We need to have joy in everything we do. We have things to clean up, but that’s football, we’re not going to be perfect. We should want to be perfect, but I don’t think we should kill ourselves if we’re not. I got things to get better at, like, a million things, but we just beat Auburn. They got a good football team, they’ve been pretty good. I think we should just be happy and keep getting better.”

On how the team views its expectation level and who they are…
“I wouldn’t say there was an expectation level. I’d say there was an expectation level after the Oregon game. But, in the offseason, I think there were a lot of questions. I think we just got to play football. I mean, it’s just football. It’s X’s and O’s, it’s have fun with your brother, go jump on him. That dude just smoked that guy, that was cool! That’s why you got into the game in the first place. I think we’re getting like, ‘Ah, well, you know, it wasn’t perfect, so I’m going to be miserable.’ No; we played a good game, we got a lot of things to get better at, but that’s all it is. We can just get better at it for next week so we can be better next time. We’re going to enjoy this.”

On getting to wear the spike pads after his fumble recovery…
“It felt amazing. It was really my first time ever getting them so it was a big thing for me I feel like.”

On allowing only 10 points in the game…
“As a defense, any time we let an opponent get 13 points or less we feel like we did our right thing. 13 is the standard
for us. So, we felt like we needed to come out and prove something and we definitely did that.”

On what was different coming into this game, compared to Missouri…
“Really the energy coming in. We started off slow but guys never looked back. Our guys just kept playing, kept looking forward, and we came out with the win.”