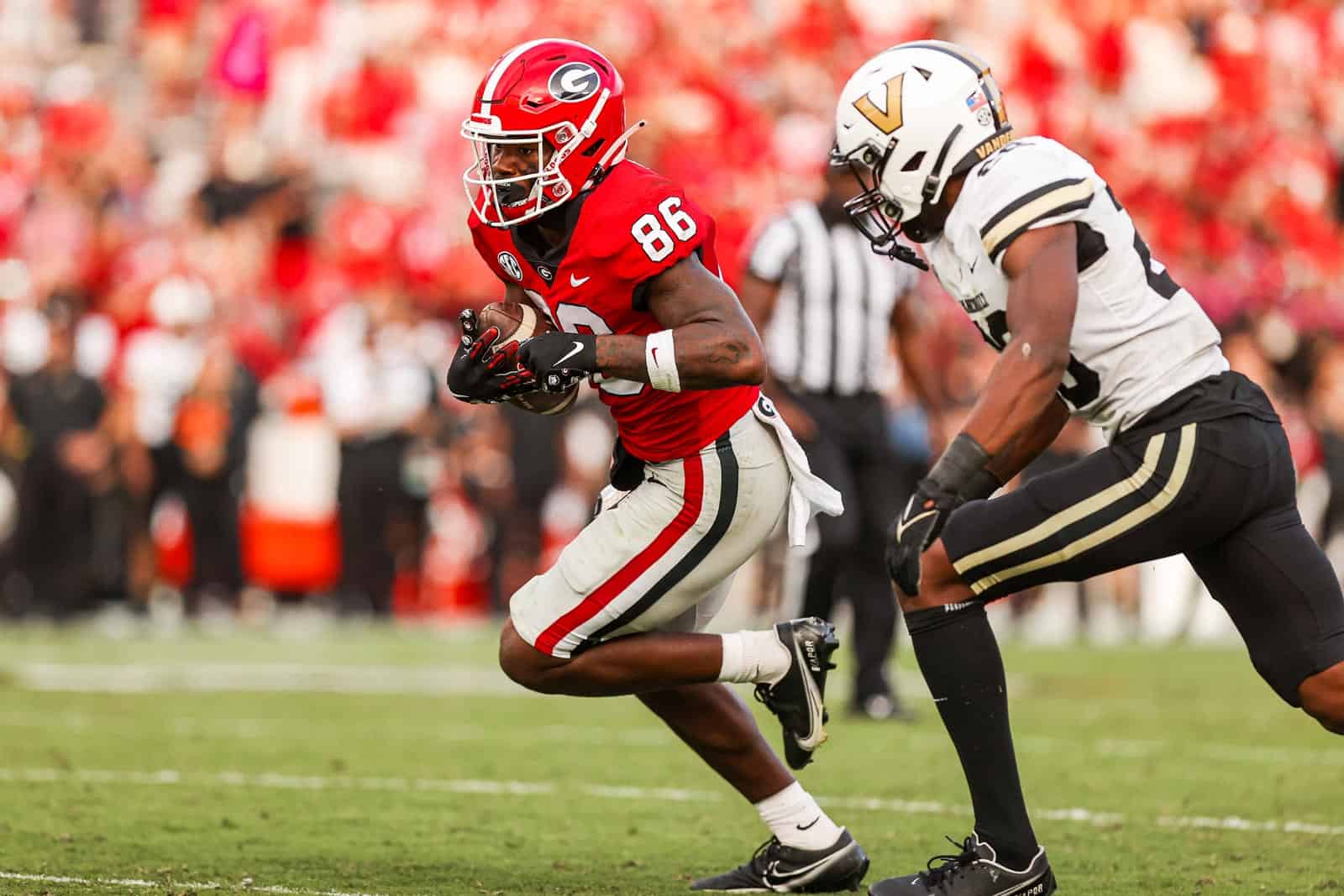 ATHENS, Ga. — The top-ranked Georgia football team looked sharp in every phase of the game Saturday afternoon at Sanford Stadium, cruising to a 55-0 win over Vanderbilt on Homecoming weekend. Quarterback Stetson Bennett completed 18 of his first 20 passes for 211 yards and two touchdowns, while the stellar Bulldog defense never let the Commodores set sail.

Georgia (7-0, 4-0 SEC) heads into its off week on a high note after dominating the game from start to finish. The offense gained 579 yards, the defense held Vanderbilt (3-4, 0-3) to just 150, and Georgia also made something happen on special teams, both kicking and returning.

Georgia got the ball first and went right to work, spreading the ball around as the Bulldogs marched 75 yards for a touchdown. Kenny McIntosh started the drive with an 8-yard run and ended it by catching a screen pass from Bennett and running the ball in for an 11-yard touchdown.

The Bulldogs’ third drive of the game got a boost from Ladd McConkey, who returned a Vandy punt 20 yards to the Commodores’ 42-yard line. On first down, Bennett hit Marcus Rosemy-Jacksaint for 18 yards across the middle. Then came a 5-yard completion to McConkey and a thread-the-needle back-shoulder throw on the left side for 12 yards to tight end Brock Bowers, who had a couple of defenders around him.

On first-and-goal at the 7, McIntosh scooted in up the middle for an easy score and a 14-0 lead with 1:40 to play in the opening quarter. That drive gave Georgia 135 yards of offense, to just 17 for Vandy.

After the defense again shut down the Commodores, Bennett and the offense kept cruising. Daijun Edwards started it with an 11-yard run and later ended it with a 1-yard touchdown plunge — that on the heels of scoring three touchdowns last week against Auburn. But the highlight of the drive was a Bennett throw from right to left, off his back foot, to wideout Dominick Blaylock for a 25-yard gain. With the Bulldogs up 21-0 with 9:00 before halftime, Bennett was 13 of 14 for 144 yards and a touchdown.

Vandy put together its best drive of the game so far on its next possession, moving the ball into Georgia territory, down to the 21. But the Bulldogs forced the first turnover of the game when Tykee Smith punched the ball out of running back Jayden McGowan’s hands and Christopher Smith jumped on the loose ball.

The offense took the gift and made the most of it, with Bennett connecting with tight end Darnell Washington on the right side. The 6-foot-7 Washington made a one-handed grab and turned it into a 34-yard gain. The drive ended with Bennett throwing, on third-and-goal from the 10, to Dominick Blaylock for a touchdown and a 28-0 lead with 1:06 left in the half. Georgia was 5 of 7 on third down in the opening half.

The Commodores didn’t take a knee and head to the locker room. Instead, they got aggressive and connected on a few plays, plus a 15-yard penalty on Georgia, and drove inside the Bulldog 30 before settling for a 44yard field goal attempt, which they missed.

Georgia added to its lead in the third quarter with Jack Podlesny’s 28-yard field goal, making it 31-0 with 9:09 left in the period. The Bulldogs had to settle for another Podlesny field-goal attempt on their next drive, which also stalled inside the 20. This time, Podlesny was good from 35 yards, pushing the UGA advantage to 34-0 with 1:40 to play in the third quarter.

Bennett was done for the day by the end of the third quarter, finishing with 289 yards passing and two touchdowns after completing 24 of 30 attempts. But the offense wasn’t done. Backup QB Carson Beck led the Bulldogs on a scoring drive early in the fourth, ending it with a 24-yard touchdown strike to Dillon Bell, making it 41-0 with 13:33 remaining.

While the defense kept denying Vandy anything, Beck and the offense weren’t done making plays. After the Commodores’ seventh punt of the game, Beck drove the offense with an effective mid-range passing game that included an 18-yarder to Jackson Meeks and a 12-yarder to Arik Gilbert. The drive ended with a big roar from the crowd after Beck hit Gilbert, in his first game since the second week of the season, for a 4-yard touchdown and a 48-0 lead with 7:21 remaining.

Georgia’s final points came with 91 seconds remaining when Cash Jones took a handoff and ran 36 yards for his first career touchdown, pushing the lead to 55-0.

The Bulldogs are off next Saturday before returning to action against Florida on Oct. 29, in Jacksonville, Fla.

*Georgia now has won five in a row against the Commodores and lead the series 60-20-2 including 22-4 on Homecoming. Head coach Kirby Smart is 5-1 against VU. Overall, the Bulldogs now are 35-4 at home under Smart and 73-15 overall.

*Before this year, the last back-to-back shutouts over VU came with three in a row from 1962-64.

*The Bulldogs have two shutouts this year (33-0 over Samford) and now 10 in the Kirby Smart era including six in the SEC.

*Georgia came in today ranked fourth nationally in Scoring Defense, surrendering just 10.7 points a game, and lowered that to 9.1 ppg.

*The leading tacklers were senior DB Chris Smith with five stops while sophomore linebacker Jamon Dumas-Johnson and freshman Jalon Walker had four each.

*VU finished 0-1 for in the Red Zone. VU was tied for the national lead In Red Zone scoring as it was perfect on the year at 21-for-21 (17 TDs, 4 FG) before missing 44-yard field goal at the end of the second quarter.

Offensive Highlights: Georgia came in averaging 39.5 points a game, jumped out to a 28-0 halftime lead, and won 55-0 with 579 yards of total offense (192 rushing, 387 passing) on 70 plays The points and total offense were both season highs..

*Senior QB Stetson Bennett completed 24-of-30 passes for 289 yards and 2 TDs in three quarters of play.

*Junior Dominick Blaylock (2-for-35 yards, 1 TD) had his first TD catch of the season, a 10-yarder, and it was the sixth of his career. For Blaylock, it was his first TD catch since 2019 when he had five as a freshman and then overcame knee injuries.

*Senior Kenny McIntosh (9 rushes, 43 yards, 1 TD Rush, 2 Rec., 20 yards, 1 TD) scored a pair of TDs. His first one made it 7-0 as the Bulldogs scored on their opening drive, going 75 yards on 10 plays in 4:59 including two third down coversions, capped by an 11-yard TD pass to McIntosh. It was his first TD catch of the season and third of career. He would add a seven-yard scamper for a TD, his fourth of the year and 10th for his career for a 14-0 lead with 1:40 left in the first quarter.

*Redshirt sophomore TE Arik Gilbert made his first two catches for the Bulldogs including a four-yard TD from Beck for a 48-0 lead.

*Redshirt freshman RB Cash Jones scored his first career TD, a 36-yard scamper to make it 55-0 in the fourth quarter.

*Georgia improved to 6-to-6 on 4th down this year, completing a 14-yard pass from Bennett to Kearis Jackson on a 4th-and-10.

Special Teams: Freshman P Brett Thorson punted just once and placed it inside the 20 for the 9th time out of his 15 punts this year.

* Senior PK Jack Podlesny entered today’s game seventh nationally in scoring with 64 points. He finished with 13 points (2 FG, 7 PATS). He made field goals from 28 and 35 yards in the second half to improve to 14-of-17 this season.

Points Off Turnovers: Junior Tykee Smith forced a fumble that senior Chris Smith recovered at the UGA 15. It led to a TD. Georgia is +3 in Turnover Margin this season. The Bulldogs have 38 points off nine turnovers. Georgia did not have any turnovers.

Homecoming Queen & King: Selected by a student vote, the Queen and King were Madison Polk of Lithonia, Ga., a fourth year double majoring in political science and sociology, and Obamide Samaye, an Atlanta native and fourth year majoring in economics.

On the week of practice leading up to this game…
“We had an awesome week. We had great practices Tuesday, Wednesday. What a great week for the
University of Georgia, with homecoming being this weekend, Good Morning America being here and giving us
great recognition. Then our team coming out and dominating. We started fast. I just think it’s a great week to
be a University of Georgia Bulldog.”

On not starting fast like he wanted to the last few weeks and the team’s performance early today…
“I was really impressed with the performance early. I thought Stetson (Bennett) had good rhythm, he was
more accurate. He did have a high ball to Darnell (Washington) that I thought he should have hit over the
middle. Outside of that, he played with good rhythm and good composure. We ran the ball,we mixed run and
pass, and we got to play a lot of players.”

On the offensive line performance and their importance to the run game…
“Our offensive line played well, they have to. They’re the guys that can really help us up front. They picked up
some blitzes there that they got aggressive in the second half and started coming after us. That forced some
field goals. I was really proud of the way our offensive line played. They continue to play tough and physical.

On the key to the defensive success…
“The line of scrimmage was the big part of it. We won the line of scrimmage and once they couldn’t run the
ball, the quarterback struggled. He’s a young quarterback, he’s a freshman. We played well on the back end. I
thought we had a couple picks that we should have had and dropped those, but I was really proud of how the
defense played.”

On how he feels about the defense’s ability to create turnovers…
“We had a lot of missed opportunities on the ball when it was up in the air, but we got one punch out and that’s
what we’re looking forward to. Once you get one they start coming in bunches. Tykee (Smith) had one today. I
tried to get some. I was punching at the ball today every chance I got a chance to punch it out. That’s
something we’re happy about and something we thrive on. That’s something we’re going to keep thriving on
and improving on taking the ball away.”

On the confident performance of the offense in this game…
“I think for us we’re always trying to improve. You’re never going to be perfect. I think we have spurts
throughout the season where we’ve struggled, spurts where we’ve been really good and I think for us it’s just
trying to be consistent. It’s how can we make our peak our consistent play level all the time. I think that’s what
we’ve been trying to focus on.”

On the offense evolving and what’s ahead…
“I don’t know what’s ahead, it depends on how we keep going. I’d say we executed the plan today very well
and I’d say we felt comfortable with it. But there were a few times that we weren’t on the same page and that’s
got to be fixed. Overall, I’m happy with how we executed, how physical and tough and how hard we played
today.”