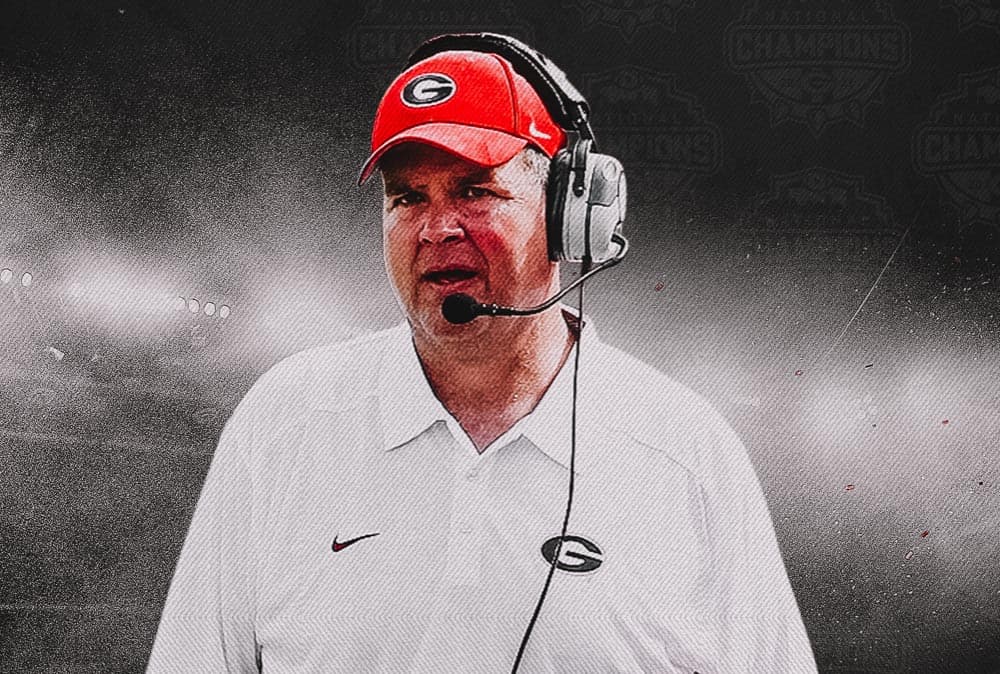 ATHENS, Ga. – Stacy Searels will return to the University of Georgia as offensive line coach after serving in a similar position at North Carolina the past three years, according to an announcement Monday by UGA head coach Kirby Smart.

After four seasons playing professionally, Searels started his coaching career as a graduate assistant at Auburn, his alma mater, in 1992. He tutored the offensive line at Appalachian St. (1994-2000), Cincinnati (2001-02), LSU (2003-06) and Georgia (2007-10) before spending three years with Coach Mack Brown at Texas (2011-13), including one season as the Longhorns’ assistant head coach. Searels spent five seasons in the ACC before coming to Carolina, coaching the offensive line at Virginia Tech (2014-15) and Miami (2016-18).

Carolina’s 2021 offense continued to show why it is one of the most productive in the nation. Despite the departure of four NFL Draft picks, the Tar Heels posted 35.2 ppg (19th NCAA/3rd ACC) and 468.2 ypg (10th NCAA/3rd ACC), while leading the ACC (17th NCAA) in rushing yards with 2,763. It marks the second consecutive season that UNC led the ACC in rushing yards. Searels and the offensive line have helped produce the most 1,000-yard rushers nationally over the last three seasons with five.

Even with the departure of four NFL skill players, the offense continued to produce explosive plays. The Tar Heels tied for seventh nationally with 80 plays of 20+ yards, tied for fifth with 42 plays of 30+ yards and tied for 10th with 13 plays of 50+ yards. Carolina ranked fourth nationally with 107 runs of 10+ yards and tied for first with 31 runs of 20+ yards. Joshua Ezeudu and Marcus McKethan led the offensive line and earned honorable mention All-ACC honors.

Searels’ offensive line was the foundation for one of 2020’s most explosive offenses in his second year at Carolina. The unit averaged 537.2 yards per game and 41.7 points per game, both UNC records. The 537.2 ypg rank fifth all-time in the ACC and the 41.7 ppg rank ninth. On the season, the total yards were fifth nationally and first in the ACC, while the points were ninth nationally and second in the ACC. The 6,447 total yards and the 500 total points rank second on UNC’s single-season list. The Tar Heels balance was evident as they rushed for 235.8 ypg (11th NCAA/2nd ACC) and passed for 301.4 ypg (18th NCAA/2nd ACC). Carolina tied for first nationally in plays of 20+ and 50+ yards (87/14), while ranking second or tied for second in 10+, 40+ and 60+ yard plays (255/22/8). The rushing attack led the country in runs of 10+ yards (109) and 20+ yards (35). Four of Searels’ offensive linemen earned All-ACC recognition with Joshua Ezeudu claiming second-team AP All-ACC honors.

In his first season at Carolina (2019) , Searels mentored an offensive line that helped UNC rank 12th nationally in total offense at 474 yards per game and fourth in the ACC in rushing yards at 188.2 yards per game, despite playing most of the season with only one senior and no junior offensive linemen. In fact, outside of seniors Charlie Heck and Nick Polino, who missed a large portion of the season due to injury, the rest of the offensive line that ended up in the rotation had combined to start only one game entering 2019. Heck led the group and earned second-team All-ACC honors before being invited to the East-West Shrine Bowl and the Senior Bowl. He went on to be selected by the Houston Texans in the fourth round of the NFL Draft.

During his time in Miami, a number of Searels offensive linemen earned recognition for their performance. In 2018, senior Tyree St. Louis was an honorable mention All-ACC selection, while four offensive linemen were recognized with All-ACC honors in 2017. Freshman right guard Navaughn Donaldson earned Freshman All-America recognition from ESPN and the Football Writers Association of America (FWAA).

Searels spent two seasons at Virginia Tech helping the Hokies produce bowl victories in both 2014 and ’15. The ’15 unit opened holes for freshman running back Travon McMillan to go over 1,000 yards on the season.

Prior to heading to Virginia Tech, Searels had his first opportunity to coach with Mack Brown at Texas. In his final season in 2013, Searels’ line enabled the Longhorns to finish 36th in the country in rushing offense and 17th in sacks allowed per game. Trey Hopkins was named first-team All-Big 12, while Donald Hawkins secured a spot on the second team.

In 2012, the offensive line, which was without a senior starter, allowed the opposition to post just 4.1 tackles for loss per game, which tied for third in the country. Offensive guard Mason Walters and fellow junior guard Trey Hopkins, both all-league selections, led a unit that allowed just 1.2 sacks per contest, a mark that was tied for the 23rd-lowest total in the FBS. The Texas offense also finished 23rd in the nation in scoring at 35.7 points per game.

During his first season at Texas, Searels helped the Longhorns rank 21st nationally and third in the Big 12 with 210.4 rushing yards per game. His unit paved the way for two 400-yard rushing games and six outings with 200 or more rushing yards. The 441 rushing yards against Kansas and 439 versus Texas Tech were two of just six 400-yard rushing performances by Texas since 1980. Senior OG David Snow earned first-team All-Big 12 honors and went on to sign a free-agent contract with the Buffalo Bills, while sophomore OG Mason Walters was named to the second team. OT Josh Cochran (first team) and C Dominic Espinosa (second team) both earned Freshman All-America honors.

Searels joined the Longhorns after coaching the offensive line at Georgia for four seasons (2007-10). He added the duties of running-game coordinator in 2009. During his time in Athens, the Bulldogs ranked in the Top 25 in the nation in fewest sacks allowed three times, including ranking sixth and leading the SEC in 2009 with just 12.

In 2010, Georgia finished the season ranked 30th in the nation in scoring offense with an average of 32.1 points per game. That included a seven-game stretch to end the regular season where the offensive line helped the team average 41 per contest. During that time, the Bulldogs scored no fewer than 31 points and topped the 40-point mark five times. Senior Clint Boling led the line and was named to the Pro Football Weekly All-America Team, along with being a first-team All-SEC selection.

Boling also earned first-team All-SEC honors in 2008 and ‘09 under Searels. In 2009, Georgia completed an 8-5 season with a win over Texas A&M in the Independence Bowl. The Bulldogs averaged 161.0 rushing yards per game and ranked sixth in the nation in fewest sacks allowed.

Even while blocking for a high-powered passing attack, the line helped RB Knowshon Moreno garner All-America honors from the American Football Coaches Association en route to becoming a finalist for the Doak Walker Award. Georgia finished the season 10-3 and ranked No. 13/10 after defeating Michigan State in the Capital One Bowl.

In his first season at Georgia, as in 2008, Searels was faced with starting three freshmen, one of whom was Boling, whom he helped earn Freshman All-America honors in 2007. He also guided C Fernando Velasco to second-team All-SEC recognition. Behind that line, Moreno earned first-team All-SEC honors and the Bulldogs completed an 11-2 campaign that ended in a Sugar Bowl win over Hawaii and a final ranking of No. 2/3. The offense averaged 177.2 rushing yards per game, while ranking 34th in the nation in scoring offense (32.6 ppg) and 13th in fewest sacks allowed (15).

Searels made a habit of producing All-America linemen for LSU. He coached two first-team All-Americans in Stephen Peterman and Rimington Award winner Ben Wilkerson and a second-team All-America selection in Andrew Whitworth. Five of his Tigers linemen earned spots on NFL rosters.

In addition, during that four-year stretch, LSU’s offensive line produced a pair of first-team Academic All-Americans in Rodney Reed and Rudy Niswanger. LSU had an offensive lineman named first-team Academic All-America in four straight years. Niswanger became one of the most decorated student-athletes in school history in 2005, winning the Draddy Trophy as college football’s top scholar-athlete, as well as being the inaugural recipient of the Wuerffel Trophy.

Searels joined the staff at LSU after a two-year stint as offensive line coach at Cincinnati. While with the Bearcats, Cincinnati played in two bowl games and won the school’s first conference title since 1964 by capturing the 2002 Conference USA crown.

Prior to joining Cincinnati, Searels served as an assistant coach at Appalachian State from 1994-2000, helping the I-AA Mountaineers to five playoff appearances and a pair of Southern Conference titles.

While at Appalachian State, Searels was presented with the NCAA Award of Valor, recognizing him for his act of courage following a head-on collision involving a van carrying members of the Mountaineers football team and support staff on Sept. 30, 2000.

Searels got his start in coaching as a graduate assistant at Auburn in 1992, working with a Tigers squad that posted a perfect 11-0 mark in 1993.

A three-year starter on the offensive line at Auburn, Searels earned first-team All-America honors from both the Associated Press and Football News as a senior in 1987. He blocked for Heisman Trophy winner Bo Jackson in 1985 and All-America Brent Fullwood in 1986. Searels was a first-team All-SEC selection as both a junior and senior, and he was honored with the team’s Ken Rice Award as the school’s best blocking lineman in 1987.

Searels played in both the Japan Bowl and the Senior Bowl before becoming a fourth-round draft pick by the San Diego Chargers in 1988. He played two seasons with the Chargers before moving to the Miami Dolphins in 1990. He ended his professional career in 1991 with the New York/New Jersey Knights of the World League of American Football.

A native of Trion, Ga., Searels graduated from Auburn with a degree in marketing and transportation in 1990. He added a master’s degree in higher education administration from Auburn in 1995. Searels is married to the former Patricia Hale, and they have two daughters, Taylor and Savannah.