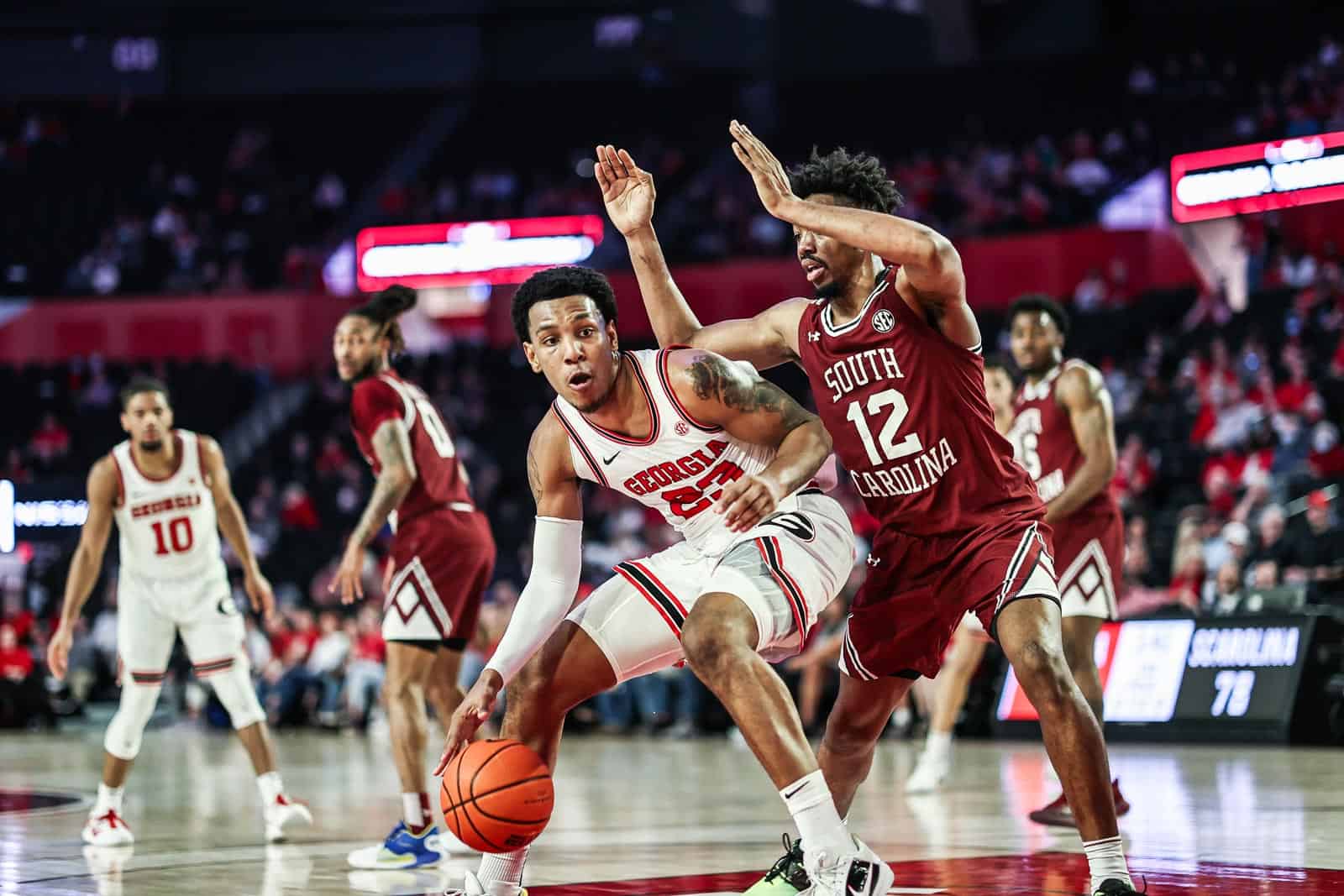 Sophomore Kario Oquendo led Georgia (6-19, 1-11 SEC) with 18 points on 6-for-12 shooting, including a season-high three 3-pointers. Senior Braelen Bridges tallied 16 points with five rebounds and four assists, while sophomore Jabri Abdur-Rahim notched 12 points. For the game, the Bulldogs shot 42.1 percent from the field.

“Bottom line, we didn’t make enough shots,” said Georgia head coach Tom Crean following the game. “We still had chances to bring it back it those shots go in, and unfortunately, the disappointment of missing shots affected our defense. That’s just a continued area of growth that we’ve got to get better at.”

The opening sequence of the game featured an offensive flurry as both teams racked up baskets in the early minutes. Powered by Oquendo and graduate Aaron Cook in the paint, Georgia built a 16-8 lead by the first media break.

South Carolina (14-10, 5-7 SEC) ate into the deficit as the half wore on, led by six straight points from senior forward Keyshawn Bryant, eventually moving in front on a three-point play. The run ultimately extended to 19-3 and gave the Gamecocks a 29-21 lead by the under-eight timeout.

Now trailing by 13, Oquendo brought the Bulldogs back into the game with consecutive 3-pointers, but the Gamecocks answered with back-to-back layups. After nearly three minutes without a basket, Abdur-Rahim broke the drought with a corner three, followed by a transition lay-in from Oquendo to make it a six-point game. A layup from Bridges with seven seconds left sent the teams to the locker room with South Carolina leading 42-38.

Georgia opened the second half with seven consecutive points, briefly retaking the lead with a Jaxon Etter layup. With every Georgia score, South Carolina quickly answered to keep the lead hovering around five points. The Bulldogs then used a 7-2 run to bring the score to 60-58 at the halfway mark of the period, but the Gamecocks would counter with a 9-1 run of their own.

With just over four minutes to play, senior Noah Baumann made it a seven-point game with a 3-pointer, but South Carolina again responded with a three on the other end as it took control of the contest. In the final minutes, the Gamecocks sealed the victory at the line as both teams entered the bonus.

Georgia returns to the road this week as it travels to Baton Rouge to take on LSU on Wednesday, Feb. 16 at 7 p.m. on SEC Network.

• Cook’s Milestones – Graduate Aaron Cook finished the game with six assists, bringing his career total to 450. Cook now has 141 assists this season and ascended from No. 17 to No. 4 among UGA’s all-time season leaders. Cook is just seven assists shy of joining the Bulldogs’ top-10 single-season leaders.

• Awesome Oquendo – Sophomore Kario Oquendo finished the game with 18 points. It was his fourth consecutive game leading the Bulldogs in points and 10th time this season.

• Taking chage(s) – Junior Jaxon Etter took two charges on Saturday, upping his season total to 23 in 24 games played…and to 31 in his last 35 outings dating back to last season.

On South Carolina’s zone defense…
“I think the transition, no question, that hurt us in the first half. We didn’t do a great job of getting the rim covered. And we have to get back and get the rim covered. You stop the ball but before you stop the ball you cover the rim. And that was certainly, that and the rebounding were two keys to the game. And, again, if you’re going to win games, you’ve got to make shots. We didn’t make enough. Against the zone, we just wanted to get the ball inside. We missed some open shots. We wanted to go play through Braelen as much as we could. We wanted to get the ball in the middle and get it swung. And there’s a few too many times that we’re playing east to west but then we were able to get it inside and we just missed the shots. No question, a lot of guys had to play longer tonight. We didn’t get a lot out of a couple of guys which hurt us, which when you’ve got nine guys on your bench or nine guys that are eligible health-wise to play for you, you’ve got to get more from more people. Couple times we didn’t get that. Bottom line, we didn’t make enough shots. And we still had chances to bring it back if those shots go in. And unfortunately, the disappointment of missing shots affected our defense. And that’s just a continued area of growth that we’ve got to get better at.”

On changing the momentum of the team…
“We have no size right now. With Josh Taylor being sick, with Ty McMillan being out, those are guys that can spell Braelen a little bit. And we didn’t have a great—we didn’t get a lot from Dalen today. And in a situation like this you need something from everybody. And it’s just a matter, guys had to play way too long. It’s not that they played too many minutes; it’s that they played too long of stretches. And the game is a very physical game. And your confidence can leave you a little bit when you’re not making shots. And when we weren’t making shots it makes it that much more imperative to get to the rim to make plays. And too many times again today, though, we challenged the shot blockers. And we just have to understand that we call it an ice, if you don’t have the layup just drive it underneath the board, bring it out on the other side of the or board and make a kick. We continued to challenge guys for no reason. And instead of driving it out, like I said, and icing it or pump faking — and those become shot turnovers when you drive in on shot blockers. Again, we’ve got to get smarter there. But I think the fact that we had to play guys so long stretches, definitely a kid like Braelen, we had to play him such long stretches that he needs a blow here and there and we weren’t able to do that today unfortunately.”

On keeping from getting frustrated at this moment…
“I just don’t think you can. You have to tell the truth. I think you have to tell your team the truth, which I do. I think you’ve also got to have a really strong belief, which I do. And those are really, really important things. The games — it’s getting harder and harder for players to understand how much game is really there. Six-point game. Ten-point game. We started the game, I think, scoring nine out of ten or eight out of ten. We finished the half scoring seven out of 12, which wasn’t bad either. Right? And so, your scoring is going to come. What can’t happen is, when you’re missing shots, you allow the other team to come down and you have to, A, get the transition or, B, let them get open a few times. You cannot be living in the last play. And that’s the thing that I try to harp on the most, because you can control your mentality. You can’t control if the ball’s going in or not, necessarily. But you can control your mentality when things aren’t going your way. And we weren’t great there today, unfortunately.”

On running out of steam due to the depth…
“I would say, without looking at the film, the way I was feeling during the game, probably. Probably. I’m not trying to make that an excuse. It’s just a fact today that we had to play some guys too long, and without those. And so, I would say that would be it. But I would also say that the fact that we were letting lack of offense. Lack of offense can wear you down, too. And we struggled with that at times. We still struggle with that. I wish we weren’t, but we do. And we should be past that, where our lack of offense is controlling our talk on the defensive end, not necessarily controlling getting back, but controlling our talk or how we’re closing out to people. And it was a very physical game, and we didn’t always match up with it physically the way we needed to.”

On the close games….
“That’s a big thing that’s been going on this season. It’s just getting over that hump. When we made that run, making that extra push to finish the game and get the win. So that’s big for us.”

On staying motivated…
“I think at this point it’s self-motivation. Just not wanting to lose. Just wanting to be a winner and fighting until the end.”

On the zone defense…
“They were in zone, so it slowed us down a little bit. I felt like they did that to stop our cutting and us getting the ball inside. I mean, it just changed our game plan. But I felt like we made some good plays in the zone once we got the ball in the middle.”

On self-motivation…
“For me, personally, I know we all really enjoy playing with each other. We all really like each other. We all really like basketball. Those are the two things that keep me going. I really like my teammates, and I really like to play basketball. No matter what is going on, I’m going always keep going. I’m going to keep my head down. I’m going to try and keep working. I try to do a good job of telling everybody to stay positive and keep working. Like Braelen said, we try to get on a one-game win streak every game. That’s going to be no different going into LSU. Our mindset is going to be the same. We’re going to try to get on a one-game win streak, and we’re just going to keep going.”

On frustration within the team…
“Nobody likes to lose. There’s a frustration every time we lose. Like I said, we enjoy playing basketball. We enjoy playing with each other. Obviously, we want to win, and that mentality isn’t going to change going into the next game. We feel like we had some opportunities to get back in the game towards the end, and we weren’t able to do that. Obviously, it’s frustrating every time we lose, but, like I said, next-game mentality, next-play mentality. We’re focused on LSU right now, and we’re going to go try and get that win.”