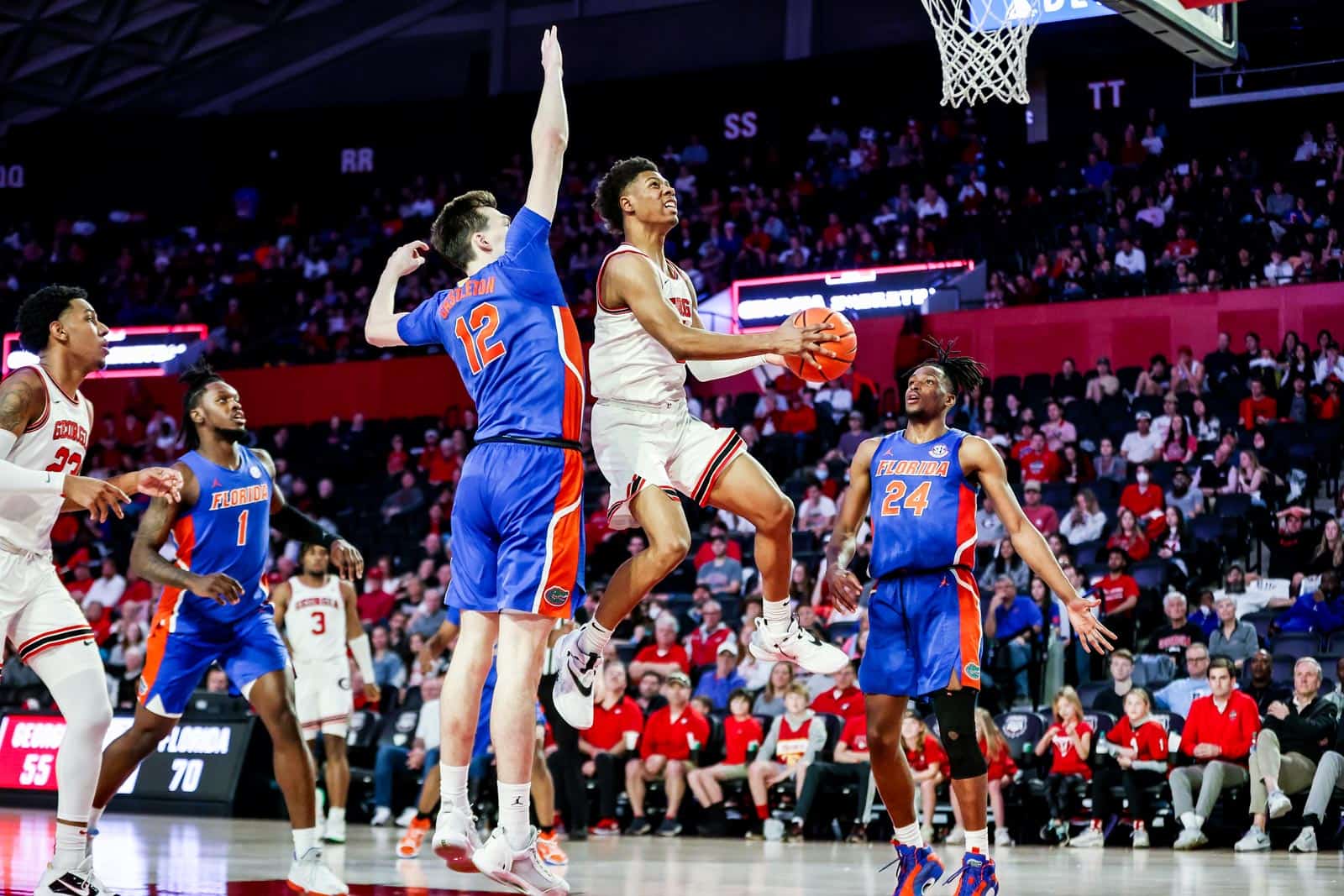 Oquendo led Georgia (6-23, 1-15 SEC) in scoring for the seventh time in eight games, finishing 7-for-19 from the field with four 3-pointers and six rebounds. Senior Braelen Bridges tallied 16 points on 8-for-12 shooting with a team-high seven boards, while graduate Aaron Cook posted 10 points and four assists. For the game, the Bulldogs shot 46.6 percent from the field.

“I feel for these guys in so many ways,” said Georgia head coach Tom Crean following the game. “Crowd was great. I feel for them. I feel for our players so much. We just could not get both ends put together in a consistent way. Too many times in this game, we gave up the straight line drive.”

Both offenses came out firing in the early going with Georgia finding success from beyond the arc with a trio of threes, but Florida (18-11, 8-8 SEC) was able to match with three of its own before the first media break. Coming out of the timeout, the triples continued to rain down with Oquendo and senior Noah Baumann connecting to give the Bulldogs an 18-16 lead.

After Cook tied the game with a transition layup, Florida began inching away with a 9-0 run before a pair of quick Georgia buckets ended the drought. The Bulldogs’ run continued with Oquendo bringing the deficit to two with five minutes remaining. The Gators worked in the paint to rebuild the advantage, while Oquendo continued to battle with his fourth three of the half, bringing the score to 41-34 Florida at the half.

As the second half opened, Florida broke out with 10 unanswered points, including a pair of threes. Led by junior Dalen Ridgnal, Georgia responded with a 13-3 run, cutting the Gators’ lead to seven with under 13 minutes to play. Yet, as before, the Gators countered with strong shooting to power a 12-2 run, giving them a 68-53 lead at the under-8 timeout.

In the closing stretch, Bridges continued his strong performance with a pair of jumpers, but Florida was able to answer and maintain its comfortable lead. With both teams entering the bonus, the Bulldogs knocked the margin down to 12, but were unable to cut further though Cook hit a three in the final seconds.

Georgia remains home this Tuesday, March 1, for its final home game of the season against Tennessee at Stegeman Coliseum. The matchup with the Volunteers is set for a 6:30 p.m. tip and will air on SEC Network.

• Tonight’s game marks the 225th meeting between the Bulldogs and Gators – Florida leads Georgia 120-105 in the series.

• Super Kario Galaxy – Sophomore Kario Oquendo led the Bulldogs in points (20) for the 14th time this season. Today marked his 20th double-digit performance, including his 13th in conference play and 10th in a row. It also was his team-leading 10th 20-point outing.

• Passing Points – With four assists today, graduate Aaron Cook moved into third place all-time on the UGA single-season assists rankings. Cook’s 156 assists passed Sundiata Gaines, who had 154 in the 2006-07 season. Cook is 13 shy of the No. 2 total of 169 by Pertha Robinson in 1995.

• Mr. Hot Hand – Redshirt-senior Braelen Bridges recorded his 21st double-digit performance of the season, including his 12th in league play. The Atlanta, Ga., native is went 8-for-12 on the afternoon, moving his season field goal percentage to .637 – ranks second among Bulldogs’ in a single-season behind only Lavon Mercer (.643 in 1979).

Opening Statement…
“All right, it’s disheartening I feel for these guys in so many ways. Crowd was great. I feel for them, I feel for our players so much. We just could not get both ends put together in a consistent way. Too many times in this game we gave up the straight-line drive. We guard the first dribble or the initial drive, but it’s that second dribble and we’re just opening up. We don’t do that in practice, and it’s happening because we’re not in the gaps as much as we need to be. And because a guy makes a three and we get a little uptight with it, whether it’s man or zone, but we got to do a better job of guarding the ball in the initial drive, initial action that starts the drive and kick, and then the bigger issue is we’ve got to have more hand pressure. We’ve got to have more — we have to be a deterrent and a disruptor when guys have the ball and they’re shooting the ball. There is just too much comfort when people are shooting it. We’re there, but we’re not there with our hands extended and flexed. And we work on shot challenges every day. We just have to do a better job in the game. It’s not the offense. We’re going to score. We’re also going to have some lulls. It’s part of the game. We can control our hand pressure and our hand — and our flex of our wrist and the whole thing better. Maybe not as good guarding the ball, but that’s why we got to be in the gaps to detour the guy from believing he can get into a straight line, and we just didn’t do enough of that.”

On the 10-0 run to start the second half was a crucial part of the game…
“Yeah, we didn’t have the right urgency. We had a couple of turnovers. They were unaggressive, right? We lose the ball in the post, and they got some run offs. The first five to eight minutes of the second half or so, crucial. We closed half, even though we were down I think 7, it’s not a big deal, right? You just come back out and we got to go, and we just did not have that urgency with our own offense in the sense of how strong we have to be with the ball. Then the same thing on the defensive end. Just not challenging with authority enough the way we have to when it comes to guarding the basketball when the guy goes into his shot. So that was it. I’ll have to go back and watch the film for a blow by blow. I don’t have that recollection, but that’s why I called the timeout, because we were doing self-inflicted things, right? Not getting our hands up our losing ball when we don’t need to lose it.”

On the big picture of the rest of the season…
“I hope so. Oh, yeah, absolutely. We expected to win today. You can’t — the way they work and the way we prepare, and we’re not working and preparing like a team that’s won one game. Unfortunately, we have, that’s all we’ve won. But we’re not preparing like that, and we’ve got to stay with that. As I say to these guys, the more adversity kicks in the harder it is to fight it off, but you have to fight it off. You have to fight the mentality and all those things off if you want to be successful in life. And it’s not just about winning games, which is obviously what we want to do, but it’s about the mindset you have to have moving forward. I fully expect we’ll continue to do that and we’ll be ready to go Tuesday night against a great Tennessee team.”

On Florida’s Phlandrous Fleming…
“He’s a pretty good player. I workout with him, we have the same trainer so I knew he could play.”

On the differences between the first and the second half….
“I mean they were hitting threes all game. They shot the ball pretty well from three. I really got to look at the film and see to be honest. I guess just getting timely stops at certain times, stopping their runs, and scoring. They shot the three really well tonight.”