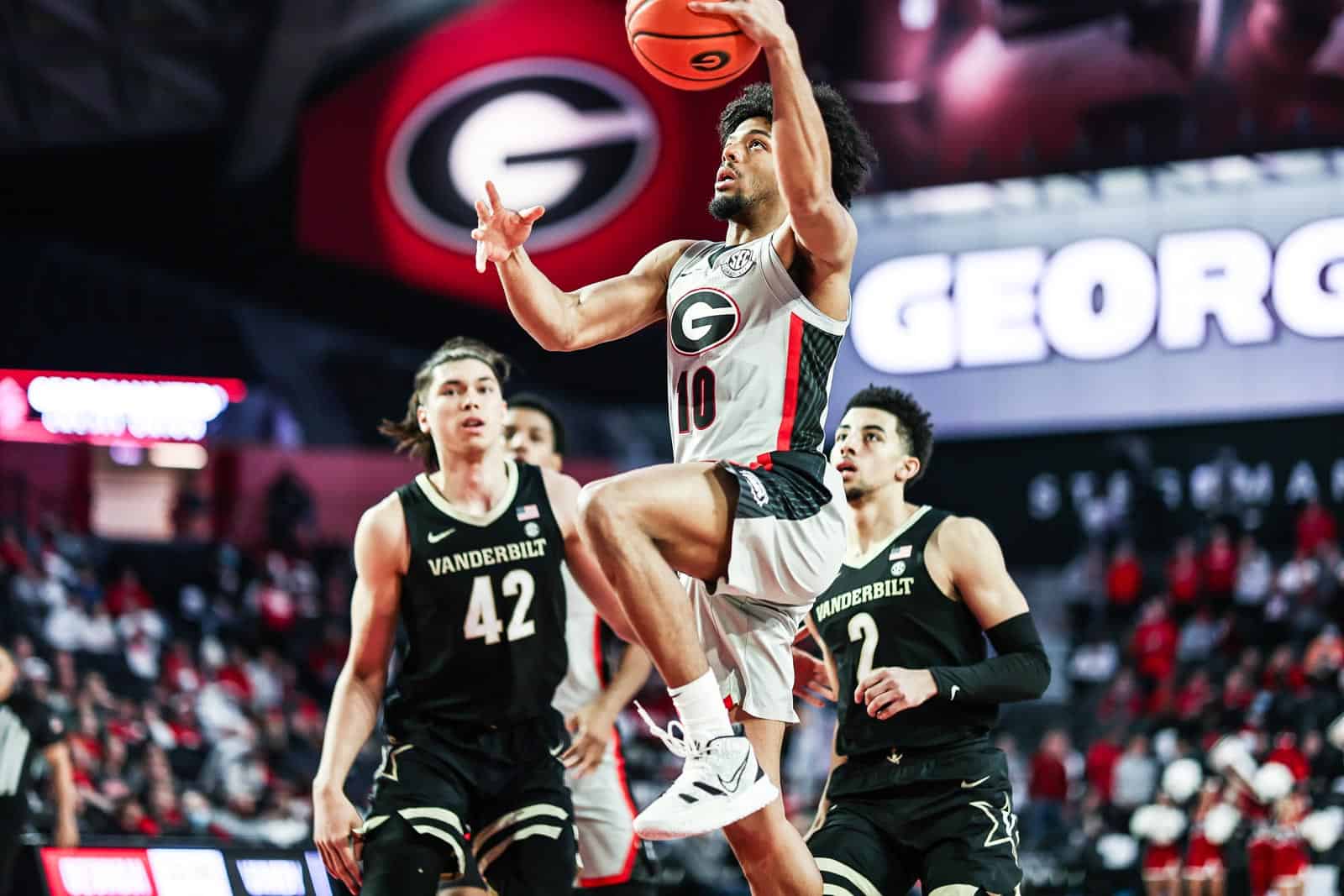 Junior Jaxon Etter led Georgia (5-12, 0-4 SEC) with a career-high 16 points on 5-for-8 shooting, including four 3-pointers. Senior Braelen Bridges tallied 14 points and six rebounds, while graduate Aaron Cook pitched in with 10 points and four assists. For the evening, the Bulldogs shot 44.8 percent from the field and outrebounded the Commodores by a 38-28 margin.

“We had too many points off turnovers in the second half,” said Georgia head coach Tom Crean following the game. “Our low post defense was not great, and they do a really good job of making the double hard because they run the split action on the ball side. We gave up a couple of those buckets…There’s very little you can do to defend a live ball turnover, and that hurt us.”

Georgia quickly ran out to a 10-5 lead with all five starters scoring in the early going, but Vanderbilt (10-6, 2-2 SEC) eventually tied the game up near the midway mark of the half. After the Commodores moved ahead, Etter put the Bulldogs back ahead with a 3-pointer followed later by another triple from junior Dalen Ridgnal and a lay-in from Bridges that made it an eight-point game with under five minutes to play.

As the half wore down, Etter extended the lead with back-to-back threes, clinching a new career high in scoring. Bridges continued his strong first half with a driving score, while sophomore Kario Oquendo also connected on the fast break. However, Vanderbilt scored five unanswered points in the final minute to cut Georgia’s halftime lead to 36-28.

The Commodores continued their scoring streak with eight straight to open the second half, forcing an early Bulldog timeout with the game now tied. Following the timeout, a Vanderbilt dunk and 3-pointer brought the run to 18 consecutive points before Bridges posted back-to-back scores to narrow the newfound deficit. Unfortunately, the Commodores continued to surge with another 8-0 run to go up by nine with 13:24 remaining.

Following a six-point Georgia burst, Vanderbilt responded with a pair of layups before a Noah Baumann layup and Etter’s fourth three of the night brought the score to 55-54 with under nine to play. Once again, the Commodores responded with an 11-2 run to refurbish their lead, capping off the sequence with a thunderous fast break dunk. After trying furiously to close the gap, the Bulldogs made one last rally with six unanswered points in the final 95 seconds, drawing to within four before Vanderbilt sealed the game at the foul line.

Georgia returns to the road this week as it travels to rival Auburn on Wednesday, Jan. 19. The game will tip at 9 p.m. EST and will be broadcast on ESPNU.

• Tonight’s game marks the 148th meeting between the Bulldogs and Commodores – Vanderbilt leads Georgia 92-56 in the series.

• Spreading the Wealth – All five of Georgia’s starters contributed in scoring the first 10 points for the Bulldogs tonight.

• Career Night – Junior walk-on Jaxon Etter notched a career-high 16 points, including a career-most four 3-pointers. Etter topped his previous career high of nine points in the first half alone when he scored 11.

Opening Statement…
“I appreciate our crowd, how great they were. They were fantastic, and we just couldn’t pull it off. We had too many points off turnovers in the second half. Our low post defense was not great, and they do a really good job of making the double hard because they run the split action on the ball side. We gave up a couple of those buckets. We did not have a great start to the second half, but really at the end of the day outside of Jaxon we did not shoot it well, but the bottom line was the points off turnovers.”

“We usually goat to the foul line in a much better way than what we did today, and to only get 10 free throws in this game was hard, so that took away a lot of points that we usually get.”

“But the points off turnovers, there’s very little you can do to defend a live ball turnover, and that hurt us.”

On the difficulties of putting together a 40-minute game…
“I think the bottom line is we’re not coming out with the intensity and the urgency that we’ve got to have in that second half, especially on the defensive end, which means I may have to change the lineup. Maybe at the beginning of the game but probably definitely at halftime because it’s becoming too much of a story.”

“I think transition hurt us a little bit in that area, but I’ve got to watch the film to give you a better answer. I’m sorry.”

On Kario Oquendo…
“He might have been a little bit, yeah. He’s been dealing with some issues in practice, but it wasn’t a great night for him. But he’s been playing really well, and he’ll bounce back.”

On defensive issues…
“We came out locked in as a team. I felt like we were locked in. As you can see, we went into the half with a pretty good lead. The second half, I felt like we took our foot off the gas a little bit and relaxed. It wasn’t as enthusiastic or energetic on the defensive end.”

On what went wrong defensively in the second half…
“I guess just locking in more, not relaxing, not being content with playing well in the first half. That’s what my answer would be.”

On getting closer to a 40 minute game…
“I’ve said in previous interviews, and we’ve talked as a team about it countless times, it’s just the next play and stay together. When they go on a little run, it’s our job to move on the next play and get a stop on defense and score on offense. It completely ends their run; it ends their momentum and Coach always says basketball is a game of runs. If you limit their momentum, we’re in that second half. I mean, we were in that second half, but we should’ve won that game.”

On stunted momentum and slow start in second half…
“I don’t think it did, it was a focal point at halftime. We had the lead at 13, I think. You know, it was a focal point and that actually pushed us to come out even harder in my opinion. I thought we stayed together through the majority of the game, but that little five-minute stretch changed the game and just the game of basketball.”