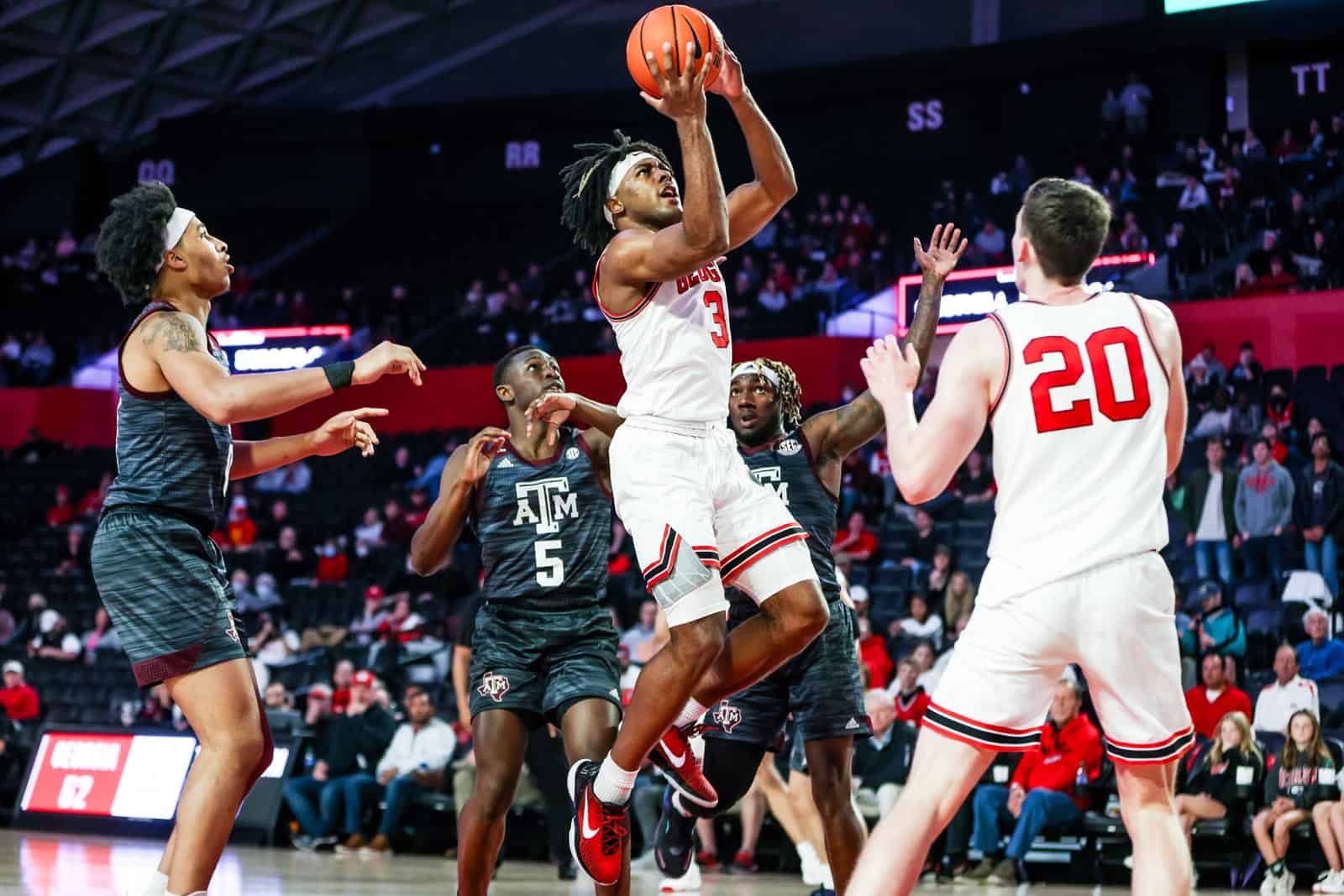 Sophomore Kario Oquendo led Georgia (5-9, 0-1 SEC) with 21 points on 9-for-12 shooting, along with a team-high 36 minutes played. Redshirt senior Noah Baumann tallied 19 points and four rebounds, while redshirt senior Braelen Bridges pitched in with 12 points and a team-high seven boards. For the evening, the Bulldogs shot 51.8 percent from the field.

“It’s a long game,” said Georgia head coach Tom Crean following the game. “We’ve had too many games where we’ve been down and we lose our spirit and we get discouraged, get distracted. Tonight they didn’t. It’s a long game. It’s a great learning lesson for them.”

In a defensive battle, Texas A&M (12-2, 1-0 SEC) jumped out to an early 8-5 lead after four minutes of play and extended its lead to six, 13-7, at the first media timeout. The Aggies continued to build on their lead before sophomore Jabri Abdur-Rahim sparked the Bulldog offense with five quick points to narrow the margin back to six, 24-19, with 7:51 left in the half. With five minutes to go in the half, Georgia drew within three thanks to a 3-pointer by Baumann, but Texas A&M responded quickly, extending its lead to 18, 46-28. The Bulldogs narrowed to margin by six to enter the half down, 46-34.

Texas A&M came out of the locker room and jumped out to a 7-2 run, quickly building the lead to 17. Georgia responded with a 13-0 run to draw within four at 55-51 thanks in part to Aggie turnovers. Both squads battled back-and-forth, before a three by Baumann and a pair of layups by Aaron Cook drew the Bulldogs back within five at the midway mark of the second period.

The teams traded buckets over the next two minutes of play before Oquendo made a spectacular layup to bring the Bulldogs within two, 66-64, with 7:56 remaining. A huge block by Abdur-Rahim and a charge drawn by junior Jaxon Etter helped the Bulldogs keep within one, but a three from A&M’s Quentin Jaxon gave the Aggies life with 5:23 left.

With momentum shifting the Aggies’ way, Oquendo made a darting layup while being fouled and made the free throw to get back within one. A&M responded with five quick points to regain a six-point lead with just over three minutes remaining. A quick layup and pair of free throws by Bridges got the Bulldogs back within two with a minute remaining. Following a made free throw by A&M’s Henry Coleman III, Baumann nailed a straight-away three to tie the game up, 76-76. With five seconds on the clock, Oquendo made yet again a miraculous three-point play on a driving layup to give Georgia its first lead of the game, 79-78. With one tick on the clock left, A&M’s Marcus Williams broke the Bulldogs heart with a corner three, giving the Aggies a two-point victory.

Georgia will travel to Lexington, Kentucky on Saturday, Jan. 8 to take on the Kentucky Wildcats at 6 p.m at Rupp Arena. The game will be broadcast live on SEC Network.

• Tonight’s game marks the 11th meeting between the Aggies and Bulldogs – Texas A&M leads Georgia 6-5 in the series.

• Consistent Kario – Sophomore Kario Oquendo finished the game with 21 points, his fourth straight game with double-digit points and his eighth this season. He led the Bulldogs in points for the fourth time this season.

• Getting Buckets – Redshirt-senior Noah Baumann finished the contest with 19 points. He notched double-digit points for the third consecutive game and fourth time as a Bulldog.

• Etter’s Endurance – Junior Jaxon Etter finished the game with a new career-high in minutes with 32.

On if anything could have been done differently…
“Yeah, we just — you’re playing for the drive because it’s a one-point game. We could have done a little bit better job on the screen to get Williams when they got it to him. But Aaron ended up picking him up and he’s playing for drive, he’s in position, and he just rose up and he hit a three. So in conventional wisdom you would think the guy, he’s playing it right, he’s going to go to the basket, right? But he felt — he made some threes, he stepped in there, and he hit it. Only thing we could have done differently is be up a little higher, try to turn the dribbler. There is basically one dribble per second. When you turn the dribbler, basically takes off two. In those situations you don’t want to be up too close, you don’t want to put it at the foul line. You want to have them make tough shot. He made a three.”

On what the comback shows you about this team…
“Yeah, I’m not surprised. They finally listened. It’s a long game. We’ve had too many games where we’ve been down and we lose our spirit and we get discouraged, get distracted. Tonight they didn’t. It’s a long game. It’s a great learning lesson for them. We gave them too many turnover points in the first half. We weren’t attacking the press the way we needed to, but we made the adjustments, we scored points in the second half, we were on the attack, and I’m not surprised. We’ve had a couple out-of-character games. We’re still really learning to play differently, and tonight we played without two guys. I mean, Dalen gets rebounds and makes threes; Cam really made strides. We didn’t have as much depth so we had to manufacture the game a little bit more.But these guys did a really good job attacking off the sets and trusting the offense and we got rewarded for it.”

On the impact of playing without different players every game…
“Well, what you learn is nobody really cares, so you better just stay locked in to what matters, which is getting your team better. That’s what it is. Just keep guys with really good perspective on being ready to play, on contributions. We’re a big player development program, so it’s got to be one where they feel like they’re getting better all the time and when that opportunity comes they’re ready to go. In certain cases the only way we could replace PJ when he got hurt was with Jailyn, and now Jailyn is out. It just it is what it is. But they work. They absolutely work. They get better. They believed. That’s why my disappointment is not for me or the staff, even close to the disappointment I have for them. They played hard enough, came back, did enough good things to win the game, and we just didn’t.”

On losing the game following the second-half comeback…
“It’s heartbreaking. You fight all the way back into a game and you think, ‘Alright, we’ve got the lead. Just one stop, we win the game.’ Guy comes down and makes a tough shot from deep, so it’s hard to accept that. That’s just what comes with this game. It’s what makes this game so fun. So, congrats to them. Their player made a good shot, but we’re not going to back down. We’re not going to stop fighting.”

On the final play of the game…
“Coach drew up a good play. It was either for (Noah Baumann) to shoot the three or pitch it and I shoot the three or whoever is in that direction shoots the three. He had a good look. It just didn’t fall. Like you said, they had the momentum. Didn’t get a chance to shoot it the guy that was by him, so that was what we got. I can’t complain with the play call. I thought it was a good call. It was the right call. It just didn’t go in.”

On adjustments from the first half to the second half…
“We just had to adjust to how they were playing. We hadn’t played a team that runs the passing lanes like that and tries to get up and pressure like that on defense, so once we made the adjustments…we kept saying in the locker room, ‘Fight, compete, next play.’ We have the right mindset going forward right now and I think this team is going to go to the next level right now for that reason. I think this team is on the right path, and even though it didn’t fall our way tonight, I think in the future it will be a different story.”

On his layup and free throw with five seconds left…
“I knew it wasn’t over, but I just felt like we were going to come out and play good defense, which we did. As the shot went up, it was one of those shots where it goes in, or it doesn’t go in. It was good defense from our team.”

On another slow start…
“I feel like we come out trying to feel the game out and see how it’s going to be for us as a team. When we face adversity, we come out and play hard. It might be one play where we get juiced up as a team. Once we figure out how to come out from the start, we’ll figure it out and be good.”

On handling the tough loss…
“We had a good talk in the locker room about it. We know we were there. We know that the game could’ve gone either way at some point. I like how we battled back and came back and got in the lead and everything like that. We still lost, but we’ll learn from it though.”

On travelling to Kentucky and playing in Rupp Arena…
“I think we’ll be fine. I think we just got to follow the gameplan and listen to our coaches, and we’ll be fine.”