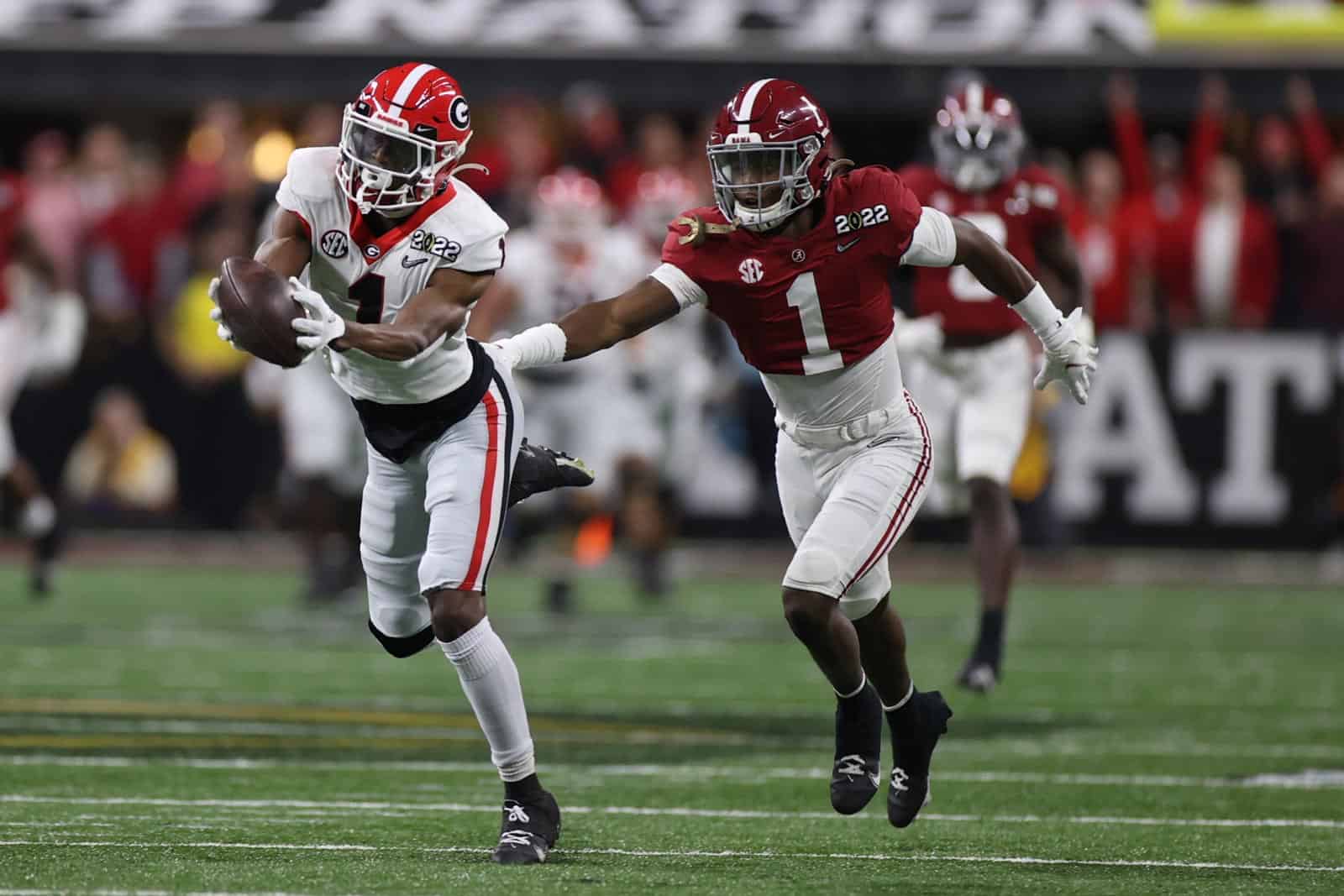 INDIANAPOLIS — Kelee Ringo intercepted a pass and returned it 79 yards for a touchdown with 54 seconds remaining to put the finishing touches on a stellar defensive effort that helped lift No. 3 Georgia to a 33-18 win over No. 1 Alabama in the College Football Playoff National Championship Game on Monday night at Lucas Oil Stadium.

For the Bulldogs, the national championship is the program’s first since the undefeated 1980 season. This Georgia squad went through the regular season without a loss, only to fall to Alabama 41-24 in the SEC Championship Game on Dec. 4. Georgia bounced back in the Orange Bowl playoff semifinal with a dominating 34-11 win over No. 2 Michigan, and on Monday the Bulldogs outscored Alabama 27-9 in the second half to win the championship.

Alabama got the ball first and drove down to the Bulldog 19-yard line before kicking a 37-yard field goal, taking an early 3-0 lead. For a few minutes early in the drive it appeared that Georgia had struck first when nose tackle Jordan Davis stripped and sacked quarterback Bryce Young and linebacker Nakobe Dean returned the ball 45 yards for a touchdown, but upon review it was ruled that Young had thrown the ball for an incomplete pass.

Georgia’s offense didn’t get rolling until late in the first quarter, when quarterback Stetson Bennett hit wideout George Pickens deep down the left hash for a 52-yard gain to the Alabama 29-yard line. The Bulldogs eventually had to settle for a 24-yard Jack Podlesny field goal that tied the game 3-3 with 12:35 left in the half.

Alabama regained the lead, 6-3, on the ensuing drive when Reichard connected on a 45-yard field goal. The Crimson Tide added a 37-yard field goal on its next drive for a 9-3 advantage. Alabama had a first down on the 8 but had to settle for the field goal after the Georgia defense made three stops, including a 13-yard sack by Channing Tindall on third-and-goal from the 6.

The trading of field goals continued on Georgia’s next drive as Podlesny booted a season-long 49-yarder to make it 9-6 Alabama with 3:06 left in the half. At the half, Alabama had a 216-153 advantage in total offense, with both defenses playing tough on third down — the offenses were a combined 6-for-17. The defenses were also tough against the run, combining for 36 combined yards on 23 attempts.

Georgia got the ball to start the second half and got runs of 11 and 19 yards from Zamir White before being forced to punt. The Bulldogs got the ball back soon after when safety Christopher Smith picked off an overthrown Young pass at the Alabama 43-yard line, for the first turnover of the game. Georgia couldn’t capitalize, however, and Jake Camarda’s 36-yard punt was downed at the 2.

Alabama drove down to the Georgia 30 on the ensuing possession and came up empty after nose tackle Jalen Carter reached up with his left hand and blocked Reichard’s 48-yard field goal attempt.

On the first play of Georgia’s next drive, James Cook run up the middle and then down the left sideline for 67 yards to the Alabama 13. Three plays later, White ran the ball in from the 1 for the game’s first touchdown and a 13-9 Georgia lead with 1:20 left in the third quarter.

Georgia’s defense again kept Alabama out of the end zone on the ensuing possession. The Crimson Tide drove into the red zone and had a first-and-goal at the 5 but had to settle for a 21-yard field goal, cutting the Bulldog lead to 13-12 with 12:59 to play in the game.

Alabama then produced the first Georgia turnover of the game, forcing a Bennett fumble and recovering the loose ball at the Bulldog 16 with 11:35 to play. The Crimson Tide later regained the lead when Young hit tight end Cameron Latu for a touchdown on fourth down from the 3. Georgia stopped Young on Alabama’s 2-point attempt, keeping the score 18-13 with 10:14 to remaining.

Georgia’s passing game went to work on the next drive, starting with an 18-yard completion to Jermaine Burton and later ending with a 40-yard touchdown pass to Adonai Mitchell in the right side of the end zone. Alabama was offsides on the play so Bennett took the free shot deep and it paid off with the touchdown. Georgia tried a 2-point conversion and Cook was stopped short of the goal line, making it 19-18 Bulldogs with 8:09 to play.

The Bulldogs forced a three-and-out on the ensuing Alabama drive and took over on offense at the UGA 38 with 7:10 left on the clock. Powered by some strong running by White, and a pass interference penalty, Georgia drove deep into Alabama territory, chewing up the clock in the process. On third-and-1 at the 15, Bennett hit tight end Brock Bowers on a screen and Bowers ran it in for a touchdown with 3:33 to play. Podlesny’s extra point put the Bulldogs up 26-18.

Alabama was driving on its next possession until Ringo intercepted Young’s pass and returned up the right sideline all the way for the clinching touchdown, setting off a huge celebration on the Georgia sideline.

Georgia’s defense had to get back on the field soon after to again try to stop Alabama’s desperation drive. Sacks by defensive end Travon Walker and linebacker Robert Beal Jr. helped close out the victory, and on the final play of the game Nolan Smith sacked Young — a fitting way to end a spectacular defensive performance by the Bulldogs and a well-earned national championship.

*Bulldogs Return To CFP National Championship Game And Win It: Tonight Georgia made its second appearance in the College Football Playoff, again as a No. 3 seed, and this time beat top-ranked Alabama 33-18 for its third national title and first since 1980. The MVPs were senior QB Stetson Bennett on offense and junior Lewis Cine on defense. Georgia snaps a seven-game losing streak in the series with Alabama and head coach Kirby Smart notches his first win over the Crimson Tide in five tries. Smart improves to 66-15 in his sixth season at his alma mater and now has a national title too. The Bulldogs complete the season with a 14-1 record, the most wins in a season in school history. Georgia has won titles in 1942, 1980 and now 2021. Bennett was the Offensive MVP of the Capital One Orange Bowl last week too.

*Defensive Effort Leads To National Title: Georgia entered as the national leader in Scoring Defense at 9.6 ppg while UA was averaging 41.4 ppg. UA led 9-6 at the half on three field goals, gaining 216 yards on 36 plays. UA finished tonight with 18 points on 399 yards on 85 plays Coming in, Georgia allowed an FBS low 12 TDs on the year and gave up just one tonight. Georgia led the nation in Red Zone Defense, and while UA was 4-for-4, it was three field goals and a TD, making a pair of 37-yard field goals and one from 21 yards. Opponents made 32 trips this year and were held to a field goal 11 times with 9 TDs plus 12 times they have come away with no points. UA took over at the UGA 16 following a play ruled a turnover. It led to a TD and UA taking an 18-13 lead after a failed two-point conversion try with 10:14 left in the contest.

The leading tackler was seniors Channing Tindall and Quay Walker with eight stops. Tindall had 1.5 TFL and a sack. Tindall’s 13-yard sack came on 3rd-and goal from the 6 that forced a field goal as UA pushed its lead to 9-3 with 7:07 left in the first half.  Junior Lewis Cine was named the defensive MVP with seven tackles and one TFL.

In the second half, senior Christopher Smith notched an interception at the UA 43. It was his third of the season. It led to no points. Also, sophomore Jalen Carter blocked a field goal to end a scoring threat, and UGA took over at the UA 20, trailing 9-6 with 3:18 left in the 3rd quarter. Before tonight, Devonte Wyatt was the last Bulldog to block a field goal, coming against Kentucky this year. In that game, Carter had a blocked PAT. Georgia has five blocks this year (2 FG, 2 Punts, 1 PAT).

Redshirt freshman Kelee Ringo had a 79-yard Interception return for a TD to put Georgia in front 32-18 with 54 seconds left. It was Ringo’s second INT and the fourth pick-six by the defense this season. It was the first pick six since Nakobe Dean went 50 yards for a score in the rout of Florida this year. Ringo’s pick-six was the longest in a CFP National Championship Game. It was the 25th score by the defense or special teams in the Smart era, and Georgia is 22-1 when they tally a non-offensive score in a game.

*Review Of Offense: Coming in tonight, the Bulldogs were averaging 39.0 points per game while No. 1 Alabama was allowing just 19.2 ppg. Georgia finished the first half with six points (two field goals) on 153 yards of total offense on 30 plays, trailing 9-6. Georgia’s first scoring drive featured junior George Pickens hauling in a career-long 52-yard catch and ended with a 24-yard field goal by Jack Podlesny. The drive covered 87 yards on 11 plays in 5:51.

Senior QB Stetson Bennett finished 17-for-26 for 224 yards and 2 TDs, and he improves to 14-3 as a starter including 11-1 this season. The leading receiver was freshman TE Brock Bowers (4 rec., 36 yards), and the leading rusher was senior Zamir White with 84 yards on 13 carries.

In the second half, senior James Cook had a 67-yard rush, it was the longest rush this year by a Bulldog. Georgia ended up scoring a TD, coming on White’s 1-yard run, his 11th TD of the year and 25th of his career. Following the PAT, Georgia took a 13-9 advantage with 1:20 left, its first lead. It capped a four play, 80-yard drive in 1:58.

*Summary of Specialists: Junior Jack Podlesny went 2-for-2 on field goals (24- and 49-yarder) and 3-for-3 on PATs. He is now 22-for-27 in FGs this year and 70-for-71 on PATs. His 49-yarder was a season-long that pulled the Bulldogs to within three at 9-6 in the 2nd quarter. Senior Jake Camarda had five punts for a 44.6 average with two inside the 20. His longest covered 55 yards plus he had a 38-yarder downed at the two. Camarda handled kickoffs too.

*Game Captains/Coin Toss: The captains were Jordan Davis, Nakobe Dean, Jamaree Salyer and Zamir White.  Georgia won the toss and deferred until the 2nd half.