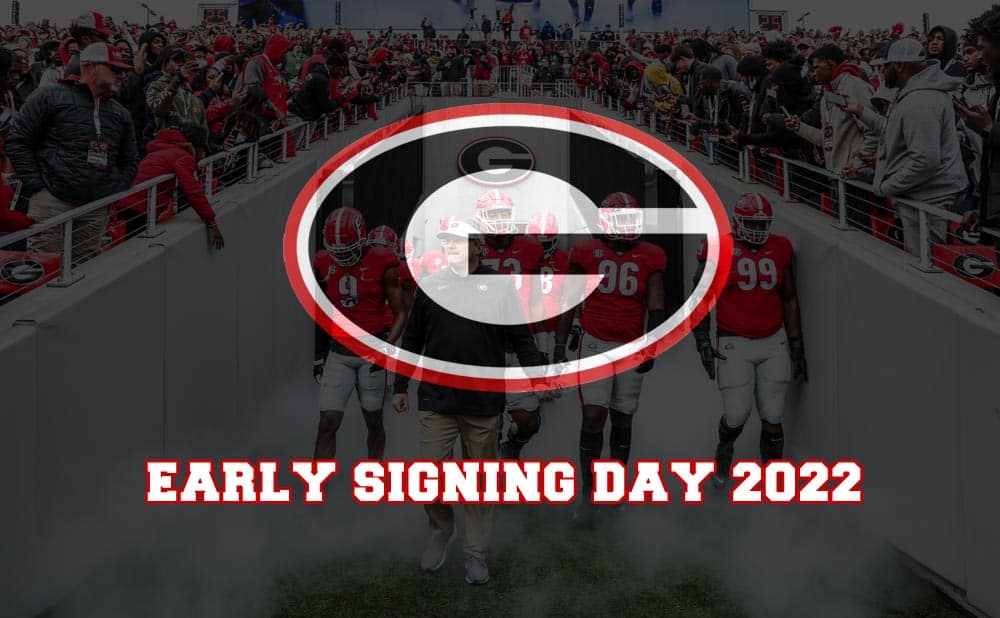 Below are details on Georgia’s 2022 football recruiting class. This data will be updated often (last updated: Dec. 15 at 9:15am ET):

Most recruits that are committed to UGA are expected to sign on Wednesday. Below is the list with expected times courtesy of UGASports.com (all times ET):

The following UGA commitments are expected to sign on the regular Signing Day on Wednesday, Feb. 2, 2022:

7:00am – 3-star Punter Brett Thorson from Australia signed his Letter of Intent with Georgia on Tuesday around 4:30pm ET.

7:27am – 5-star DE Mykel Williams has signed his Letter of Intent with Georgia.

7:32am – 4-star OL Griffin Scroggs has signed with the Bulldogs.

7:38am – 4-star LB Jalon Walker has officially signed with Georgia.

7:41am – 4-star QB Gunner Stockton is officially a Bulldog.

8:03am – 5-star athlete Malaki Starks is officially a Bulldog.

8:22am – 4-star athlete JaCorey Thomas is officially in.

9:13am – 5-star CB Jaheim Singletary has signed his LOI with the Bulldogs.

9:23am – 4-star DT Tyre West has flipped his commitment from Georgia to Tennessee.

9:36am – 4-star WR De’Nylon Morrissette has signed with the Bulldogs.

12:15pm – 5-star CB Travis Hunter has committed to play for Deion Sanders and Jackson State over Auburn, FSU, and Georgia.