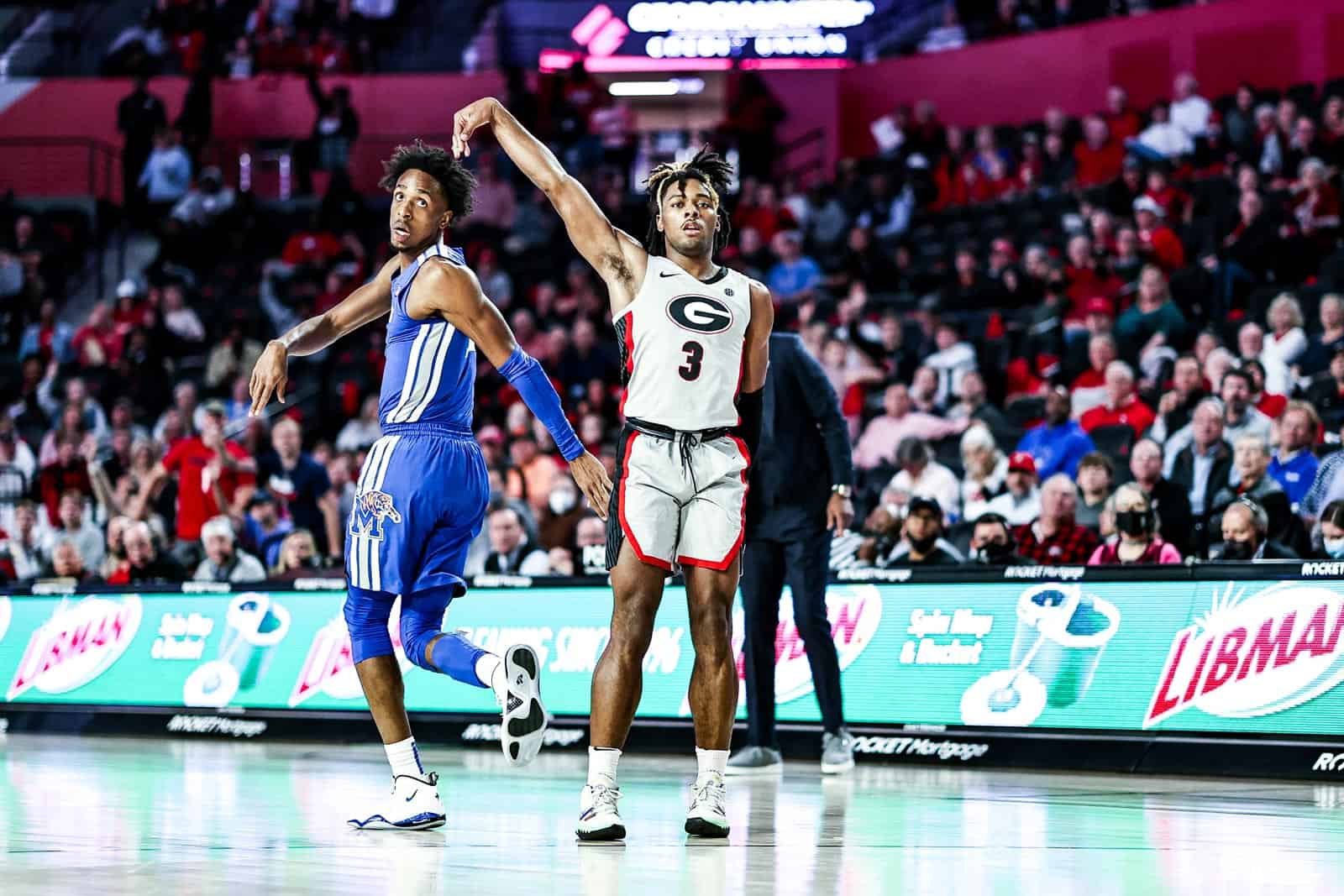 ATHENS, Ga. – With a late surge, the University of Georgia men’s basketball team earned its signature win of the young season, upsetting No. 18 Memphis, 82-79, Wednesday evening before a raucous crowd of 7,147 spectators at Stegeman Coliseum.

The win earned Georgia head coach Tom Crean the 400th victory of his career and broke a four-game losing streak for the Bulldogs (3-5). It was also the first win over a ranked opponent for Georgia since an 80-70 victory against then-No. 20 Missouri on Feb. 16 in Athens.

Five Bulldogs eclipsed double-digits in scoring, led by sophomore Kario Oquendo with a career-high 24 points on 9-for-13 shooting. Freshman Christian Wright posted 17 points and tied for the team high with six assists, while sophomore Jabri Abdur-Rahim pitched in with 15 points. Additionally, graduate Jailyn Ingram and senior Braelen Bridges tallied 10 points. For the evening, the Bulldogs shot 48 percent from the field, including to a 51.9 clip in the second half.

“First off, our fans—our students and our Georgia fans—were so good, and you could hear them all game,” said Crean following the game. “You could hear them all game. They were great all game, but the last eight minutes, they carried us. Every time we needed something, our fans carried us. That’s a team, program win and not just the players and coaches but everybody that follows this program. I’m so thankful for them, thankful for the way the students are. They were there in force, and it will get even better. I told our guys, ‘You keep showing the way you can play. We’ll have the upper deck filled again here pretty quick too.’ Very proud of our team, very thankful for the fans, and it was a great Georgia win.”

In the early going, scoring came at a premium as both teams struggled with turnovers, but the success began to improve following the first media timeout. The Bulldogs soon took the lead off a 3-pointer from Wright and continued to hold the advantage thanks to a pair of subsequent treys from Abdur-Rahim and Ingram. With under nine to play in the half, Oquendo forced a Memphis (5-2) timeout with a one-handed fast break dunk but came right back after the break with a nifty up-and-under layup again in transition.

Oquendo continued to shine on the defensive end, stopping a Tigers fast break with a strong block on Landers Nolley II just before the under-8 timeout. Georgia extended the lead to seven, but six unanswered from Memphis made it a one-score game with three minutes left in the half. Eventually, the Tigers retook the lead on a late dunk from Emoni Bates and headed to the locker room with a 34-32 advantage.

As the second half opened, Oquendo worked to keep the Bulldogs in the game, scoring Georgia’s first six points of the half. The Tigers’ lead continued to hover around four points until Oquendo tied it with a 3-pointer, followed by a go-ahead triple from Abdur-Rahim at the 12-minute mark. Memphis then responded with its own pair of consecutive 3-pointers to move back in front.

Georgia cut the deficit to one on a pair of occasions, simultaneously working its way into the bonus midway through the period. With exactly five minutes remaining, senior Noah Baumann energized the Stegeman crowd as he drew a Memphis foul to put Georgia in the double bonus and again make it a one-point contest. Back-to-back layups from Wright and Oquendo sent the Bulldogs into the final media timeout trailing 74-73.

Coming out of the timeout, junior Jaxon Etter squared the game at 75 with 2:54 left, draining a pair of free throws. Following two Memphis makes, Abdur-Rahim put the Bulldogs ahead with a deep three, accompanied by a steal and thunderous dunk from Oquendo. In the final seconds, Wright looked to clinch the game at the line, making the first but missing the second to set the Tigers up down three with five ticks to play. Georgia elected not to foul as Bates’ final heave hit the rim and the buzzer sounded.

Georgia returns to the court next week for a matchup against Jacksonville on Tuesday, Dec. 7 at 7 p.m. EST. The game will be streamed on SEC Network+.

• Tonight’s game marks the fourth meeting between the Bulldogs and Tigers – Georgia leads the all-time series 3-1 against Memphis.
• The Big 400 – With tonight’s win head coach Tom Crean pick up his 400th career win. Crean moves to 3-4 all-time against Memphis, including 2-0 at Georgia.
• Tiger King – Tom Crean has four ranked wins at Georgia – all against Tigers – two vs. Memphis, one vs. Auburn, and one vs Missouri.
• Kario Party – Sophomore Kario Oquendo finished the game with 24 points, a new career-high. Tonight marked his fourth career double digit game, and his third consecutive game scoring in double figures.
• Freshman Phenom – Christian Wright set a new career-high with 17 points. It marks his first career double-digit game. Wright also set a career-high in rebounds (6) and minutes played (38).
• Consistency – Senior Braelen Bridges finished with 10 points. It is the fifth time this season that he has tallied double-digit and the 29th for his career.
• Spreading the Wealth – The Bulldogs had a season-high five players finish with double-digit points tonight – previously four players against Northwestern.
• Toeing the Line – The Bulldogs attempted 35 free throws, their most since attempt.

Opening statement…
“First off, our fans – our students and our Georgia fans – were so good, and you could hear them all game. You could hear them all game. They were great all game, but the last eight minutes, they carried us. Every time we needed something, our fans carried us. That’s a team, program win and not just the players and coaches but everybody that follows this program. I’m so thankful for them, thankful for the way the students are. They were there in force, and it will get even better. I told our guys, ‘you keep showing the way you can play, we’ll have the upper deck filled again here pretty quick too.” Very proud of our team, very thankful for the fans, and it was a great Georgia win.”

On how much this win did for the team’s confidence…
“We needed something good to happen for us. Brian Fish just said that, and he’s right. We needed something good because we’ve been so close. We had to get them rewired today a little bit too when it looked like Aaron (Cook) wasn’t going to play. This afternoon, when he wasn’t able to walk-through, I thought it was going to be highly unlikely that he would heal enough to be able to play tonight. Unfortunately, he didn’t. We had to have a belief because we’ve been close. We’ve had numerous games where we were close. Too many times, our wounds have been things that we’ve done to ourselves. Tonight, that didn’t happen. We’ve got a really good group of people who are learning leadership, learning commitment, learning what it takes, and it was a great step in the right direction for us to get a win like that. No question, it was huge because you can talk confidence all you want while you’re playing close, but you really don’t have a confidence until you come across with a win in a tough game.”

On the last two minutes of the game…
“That’s three Freshmen if you count Christian Wright. Jabri (Abdur-Rahim) is a freshman. Kario (Oquendo) is a freshman. Christian Wright is a freshman. Because of the Covid year, and Christian is a 20-year-old freshman, so there’s a maturity to those guys. They’re growing. Kario (Oquendo)- you can say this about a lot of guys, and I’ve said it about a lot of guys over the years- he’s truly just scratching the surface. For him to play that way tonight was impressive. Everybody delivered. They really did. They were ready to go. It was a play on demand kind of game, and you didn’t know if you were going to come out because of our shortage with Aaron (Cook). Christian Wright, I don’t think I took him out in the second half, and he just continued to play a really good game. We just found a way. We had a little trouble getting it inbounded, but that was more me trying to go to a certain spot rather than throw it deep. I was worried about throwing it deep because if they get the steal, it’s a layup we can’t cover. We have to get better at our side outs. I have to do better there to give them an easier path. We found a way to do it.”

On the key to the victory…
“It was everybody, really. It was coach coming in, saying we were not going to lose the game. It was a different type of energy tonight. Nobody wanted to lose again because we lost a couple in a row. We knew that we had to come and get the win. I feel like this was the hardest that we’ve played all season. We’ve just got to piggy-back off that and keep going.”

On keeping composure late in the game…
“I feel like we were never really rattled tonight. One of the first crazy games we played was Cincinnati. It was the closest game, and I feel like that was the first time we ever had to go through adversity as a team. I feel like every game we are building up every time. We just kept composure and stayed in it tonight.”

On the team’s confidence moving forward…
“This group is one team. I feel like I always have confidence in us. Everybody we have played this year, we were in the game through the stretch in the last five minutes. Something didn’t click, and we lost it. I feel like we can play against anybody, and we came out tonight and wanted to show people that.”

On pressure of playing a lot of minutes as a freshman…
“Yes, I knew Aaron (Cook) wasn’t feeling too well, so I knew I had to take care of the ball. Coach explained how they were the leading the nation in forced turnovers. They told me just to make a simple play and not try to throw a home run pass or try to force passes that wasn’t needed. I was just making the right reads, my teammates were getting fouled and I was just logging the minutes. I was tired, but I was good towards the end once I seen we were in it to win. I had to push through it. We don’t play tomorrow; I can rest tomorrow.”

On team meeting after Wofford game…
“No, I don’t think so at all. Like Kario (Oquendo) said, we were loosing some close games to some good teams and it was only a matter of time before we were going to get ‘over the hump’ and win a game against