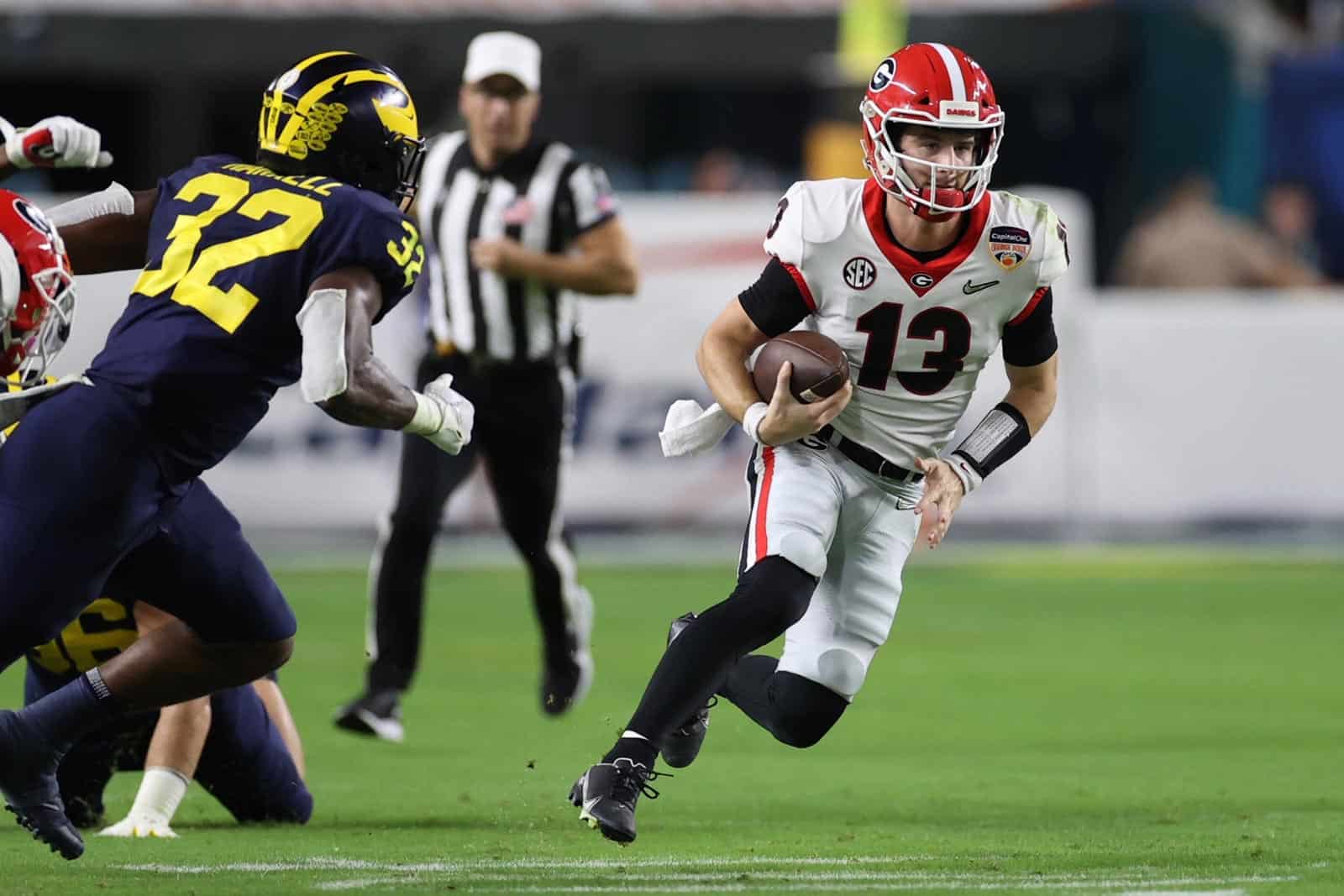 MIAMI GARDENS, Fla. — The offense scored on its first five possessions, the defense forced three turnovers, and the No. 3 Georgia Bulldogs stormed past No. 2 Michigan 34-11 in the Capital One Orange Bowl College Football Playoff semifinal game Friday night at Hard Rock Stadium.

With the win, the Bulldogs (13-1) will take on No. 1 Alabama in the National Championship Game on Jan. 10, at Lucas Oil Stadium in Indianapolis. It will be a rematch of both this season’s SEC Championship Game and the 2017 season’s CFP title game.

Georgia got off to a strong start on offense and defense, and the Bulldogs never let the Wolverines (12-2) gain any momentum. Georgia outgained Michigan 515-325, quarterback Stetson Bennett IV was sharp from the outset, finishing 21 of 31 for 307 yards and three touchdowns, and the defense was dominant throughout.

Freshman tight end Brock Bowers picked up where he left off in the SEC Championship game when he had 10 catches for 139 yards. Against the Wolverines, he caught six passes for 56 yards and a touchdown. On Georgia’s opening drive, he connected with Bennett three times for 51 yards, including a 9-yard touchdown for a 7-0 lead. The TD catch was Bowers’ 12th of the season, setting a new school single-season record.

After Georgia’s defense stopped the Wolverines on fourth-and-4 at the UGA 41, the Bulldog offense quickly moved the ball down the field. On first down at the 18-yard line, Georgia got tricky: running back Kenny McIntosh took a handoff going to the right side and lofted a perfect pass into the arms of a wide-open Adonai Mitchell in the end zone for a touchdown and a 14-0 lead with 4:41 to play in the first quarter.

The Bulldogs increased their lead to 17-0 early in the second quarter on a 43-yard field goal by Jack Podlesny. Bennett had a 20-yard run on the drive but the possession stalled inside the Wolverine 30.

Michigan got on the scoreboard on its next drive, hitting a 36-yard field goal to make it 17-3 with 7:16 to play in the half. A 42-yard completion moved the ball to the Georgia 19, but then Butkus Award-winning linebacker Nakobe Dean got on an 8-yard sack on the next play and the Wolverines eventually had to settle for the field goal.

Georgia running back James Cook caught a 53-yard pass on the Bulldogs’ next drive, down to the 15, but the Bulldogs only managed to get a 28-yard Podlesny field goal out of the drive. Podlesny’s 20th field goal of the season gave Georgia a 20-3 lead with 3:50 to play in the half.

The Bulldog defense forced a quick three-and-out on Michigan’s next possession and the offense got the ball back with 2:15 on the clock. The Bulldogs didn’t need all of that time to find the end zone again.

After a 12-yard completion to McIntosh on first down, Bennett dropped back and lofted a pass deep up the right side to wideout Jermaine Burton who had gotten behind his defender. Burton sprinted into the end zone and put Georgia up 27-3 with 1:38 left in the half.

And the Bulldogs weren’t done making plays. On the next play, cornerback Derion Kendrick intercepted a Cade McNamara pass to give the offense the ball back with 1:28 remaining. Soon after, Georgia ran into the locker room with a 27-3 halftime lead and a 330-101 advantage in total offense.

Michigan got the ball to open the second half and drove down inside the Bulldog 20, but on second-and-11 at the 19, McNamara tried to throw into the left corner of the end zone for a score. Instead, Kendrick came up with his second interception in as many possessions to give the Bulldogs the ball back.

Georgia’s offense couldn’t get anything going on the ensuing drive and Jake Camarda came on for his first punt of the evening. The Bulldog defense produced another turnover on the next Michigan drive, with Dean stripping Blake Corum and defensive lineman Devonte Wyatt recovering the loose ball at the Georgia 47.

After a scoreless third quarter, Georgia’s defense got another fourth-down stop at the Bulldog 41 early n the fourth. Soon after, Bennett connected with Cook for a 37-yard touchdown that made it 34-3 and put the game away with 11:11 remaining. A Miami native, Cook had a big game with three catches for 99 yards and six carries for 32.

Michigan’s lone touchdown came with 4:25 remaining in the game, on a 35-yard completion. The Wolverines then converted a 2-point attempt to cut Georgia’s lead to 34-11.

Linebacker Nolan Smith led the Bulldog defense with eight tackles, including a sack, Dean added seven stops and a sack, and linebacker Quay Walker had six stops. The Bulldogs finished with seven tackles for loss and four sacks.

*Bulldogs Return To The CFP And Headed To National Championship Game: Tonight Georgia made its second appearance in the College Football Playoff, again as a No. 3 seed, and beat 2nd seed Michigan 34-11. The MVPs were seniors Stetson Bennett (offense: 21-for-31, 307 yards, 3 TDs; 3 rushes, 32 yards) and Derion Kendrick (Defense: 2 INTs, 5 tackles) The first time in the CFP came when the 2017 SEC Champions outlasted No. 2 seed Oklahoma 54-48 in double overtime in the Rose Bowl Game. Then, it fell to No. 4 seed Alabama 26-23 in overtime in the National Championship Game in Atlanta.

*Staunch Defensive Effort To Advance To CFP National Championship Game: Georgia entered as the national leader in Scoring Defense at 9.5 ppg while UM was averaging 37.7 ppg, and the Bulldogs won 34-11. UM tallied 325 yards on 63 plays. Georgia leads the nation in Red Zone Defense, and UM was just 1-for-3 including a fourth down stop at the UGA 6 in the fourth quarter. Opponents have made 28 trips this year and 12 times have come away with no points. UM got its lone TD with 4:25 left in the contest, trailing 34-3.

Tonight’s leading tackler was junior Nolan Smith with eight stops and a sack followed by 2021 Butkus Award winner junior Nakobe Dean with 7 tackles, 2 TFL, 1 sack and a forced fumble (recovered by Devonte Wyatt). Georgia forced a total of three turnovers but did not convert any into points. Dean and senior Robert Beal collected sacks in the first half as they lead the team with 6 and 5.5 this year. Overall, Georgia had four sacks to give them 45 this year.

Senior Derion Kendrick notched two interceptions and five tackles. He collected his 2nd INT to stop UM’s opening drive of the 2nd half, catching it in the endzone. The two INTs tied a Bulldog bowl record held by seven others. Tonight was the first 2-INT game by a Bulldog since Richard LeCounte versus Arkansas in 2020.  Kendrick had a big CFP semifinal game while at Clemson versus Ohio State in a 2019 Fiesta Bowl win, tallying nine tackles and 2 PBU.

Senior QB Stetson Bennett improved to 13-3 as a starter (10-1 this year). In the first half, he went 16-for-21 for 234 yards and 2 TDs to nine different receivers. He completed his first nine passes for 92 yards before his first incompletion. With 1:38 left in the first half, he connected for a 57-yard TD pass to Jermaine Burton that finished a 37-second drive in three plays covering 69 yards and made it 27-3. He completed a 39-yard TD pass to James Cook to make it 34-3 with 11:11 left in the game.

The leading receiver was freshman TE Brock Bowers (6 rec., 56 yards, 1 TD), and the leading rusher was senior Zamir White with 54 yards on 12 carries. Senior James Cook had 32 yards on six attempts, and he also had three catches for 99 yards.

Georgia took a 7-0 lead, driving 80 yards on seven plays in 4:11 to start the game. The drive was capped by a nine-yard TD pass from Bennett to Bowers. For Bowers, it was his school record 12th TD reception and his 50th overall catch, which also is a record for tight ends in a season. Georgia went up 14-0 after a halfback pass from Kenny McIntosh to AD Mitchell for 18 yards. It was the first TD pass by a running back since Thomas Brown to Joe Tereshinski (QB) for 9 yards against UF in 2005.

*Orange Bowl History:  Georgia made its fourth appearance in the Orange Bowl, and the first since 1960 when it blanked Missouri 14-0. The Bulldogs are now 3-1 in Orange Bowls. Georgia’s first-ever bowl game was the 1942 Orange Bowl where the No. 20 Bulldogs defeated No. 14 TCU 40-26 to cap a 9-1-1 season. Georgia made its 25 consecutive appearance in a bowl game tonight which is the nation’s longest active streak. Overall, the Bulldogs have played in 58 bowl games and own a mark of 34-21-3. Georgia is now 2-1 versus Michigan with the other two meetings coming during the regular season in Ann Arbor in 1957 and 1965.

*Game Captains/Coin Toss: The captains were Jordan Davis, Nakobe Dean, Jamaree Salyer and Zamir White.  Michigan won the toss and deferred until the 2nd half.