No. 1 Georgia finishes SEC slate undefeated with 41-17 win over Vols

No. 1 Georgia finishes SEC slate undefeated with 41-17 win over Vols 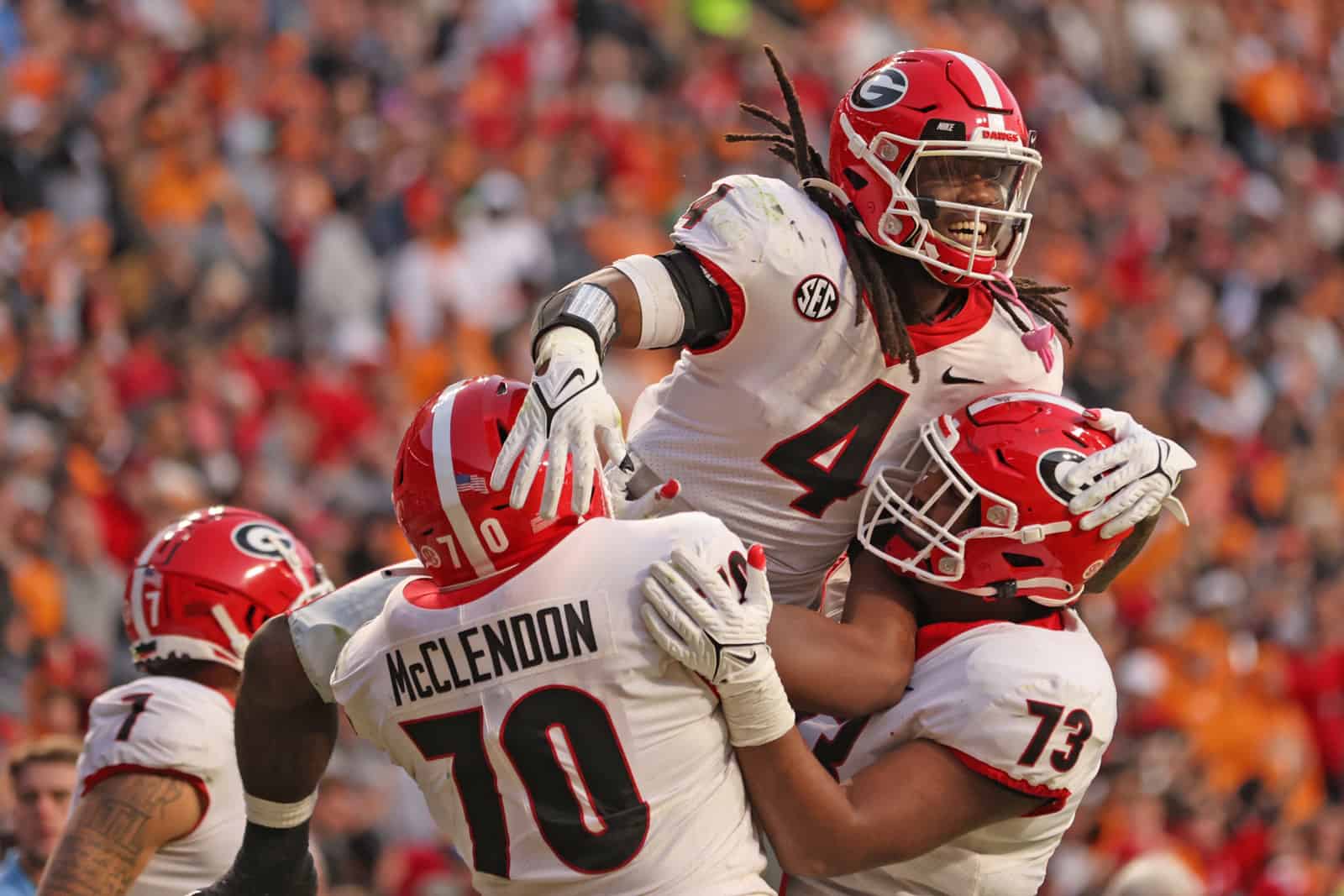 KNOXVILLE, Tenn. — Georgia senior running back James Cook tied a career high with 104 yards rushing and three touchdowns to lead the Bulldogs to a 41-17 win against Tennessee in front of 100,074 fans and a CBS national television audience Saturday afternoon at Neyland Stadium.

Tennessee led 10-7 at the end of the first quarter, but Georgia scored 34 unanswered points to take control of the game. The Bulldogs outgained the Volunteers 487-387 overall and outrushed the home team, 274-55.

“This is a tough place to play, tough atmosphere to play in, but we had excellent focus and detail from our guys,” head coach Kirby Smart said. “They just continue to be resilient and fight through adversity. This is a tough environment. Tennessee starts fast. We didn’t stop them early, but we stopped more later in the game.”

After a pair of three-and-outs, Tennessee drove 76 yards on a 13-play drive, capped off by Chase McGrath’s 24-yard field goal, to take a 10-7 lead after one quarter.

From there, Georgia scored 17 unanswered points in the first half. A field goal from Jack Podlesny, a 9-yard TD rush by Stetson Bennett and a 90-yard drive capped off by Cook’s 23-yard touchdown reception put the Bulldogs up 24-10 at the break.

The Bulldogs outgained the Vols 191-25 in total yards — including a 69-4 advantage on the ground— in the second period, while Cook totaled 113 total yards (rushing and receiving) with two touchdowns to lead Georgia’s offense. Senior defensive back Derion Kendrick recorded his second interception of the season, while junior linebacker Nakobe Dean totaled seven tackles to pace the Georgia defense in the first 30 minutes.

“I thought Dan Lanning did a great job,” Smart added. “Our defensive staff really prepared our guys for it. It is hard to prepare for that when it was hitting them fast. They run a lot of screens and things outside and spread the ball around … They threw the ball a lot more than we thought, but our guys bounced back.”

To begin the third, Georgia’s defense stopped Tennessee’s fourth-down attempt deep in Bulldog territory. Georgia then went on a 13-play, 74-yard drive that resulted in a Podlesny field goal to stretch the lead to 27-10.

Cook scored his third touchdown of the day to open the fourth quarter — this time from five yards out to give Georgia the 34-10 lead.

The Bulldog defense kept the Tennessee offense from converting a pair of fourth-downs attempts and recovered a Hooker fumble to keep the Volunteers out of the end zone. Georgia junior running back Kenny McIntosh punched it in from five yards in and Tennessee’s Cedric Tillman’s caught a 12-yard TD reception to put the final score at 41-17.

*Defensive Review: Top-ranked Georgia, the national leader in Scoring Defense (6.6 ppg), held Tennessee to 10 points in the first half as the Vols ran 41 plays for 184 yards (159 yards came in the first quarter and only 25 yards in the 2nd quarter). UT added a TD in the 4th quarter to finish with 17 points as the Vols were averaging 38.2 ppg. Georgia opponents have scored just 76 points, and that tally through 10 games is the lowest in a season at this point since 1950 when it allowed 58.

Junior Nakobe Dean led the team with 11 tcakles, 2 TFL and a sack. UT took opening kick and scored a TD, going 77 yards on 10 plays in 3:11. Georgia trailed 7-0 with 11:43 in first quarter. Then with 1:38 left in the first quarter, UT took a 10-7 lead on a 24-yard field goal. In the 2nd quarter, Georgia tied the game at 10 with 9:42 left. Also In the second quarter, seniorDerion Kendrick notched his second interception, the other came versus USC. It led to a TD. Georgia is +3 in turnover margin this season and has scored 80 points off 14 turnovers.

In the second half on its first possession, UT went for it on 4th and 4 from the UT17 and the defense forced an incompletion. The Vols turned it over on downs again on their next possesion at the UT 40 on a sack by Channing Tindall, and the Bulldogs eventually added a TD for a 34-10 edge. Tindall added a sack/forced a fumble to thwart a red zone opportunity when UT had advanced to the 7 yard line. He had eight tackles and three sacks, both career highs. UT got its final score with 3:38 left to make it 41-17. It ended a 34-0 run by the Bulldogs who trailed 10-7 with 1:39 left in the first quarter.

*Top Targets: Nine different Bulldogs caught a pass. Freshman AD Mitchell led the team with a career-high five catches for 65 yards. Junior Kearis Jackson had two for 32 yards. Senior RB James Cook (3-for-43) caught a 23-yarder for a TD that made it 24-10.

*Rushing Highlights: Georgia tallied 274 rushing yards on 42 attempts and 2 TDs. Senior James Cook had a career-high 104 yards on 10 carries including two TDs. Cook capped the first drive with a 39-yard TD to tie the game at 7. He has 13 career rushing TDs. Cook also had a 23-yard receiving TD. Cook posted 147 all-purpose yards. This was his second career 100-yard rushing game. He had 104 versus USC in 2020. This was his third career game with three total scores.

*Game Captains/Coin Toss: The captains were seniors James Cook (RB) and Quay Walker (ILB) and junior Nakobe Dean (ILB). Georgia won the toss and deferred the football until the second half.