No. 1 Georgia drops Tech to close out 12-0 regular season

No. 1 Georgia drops Tech to close out 12-0 regular season 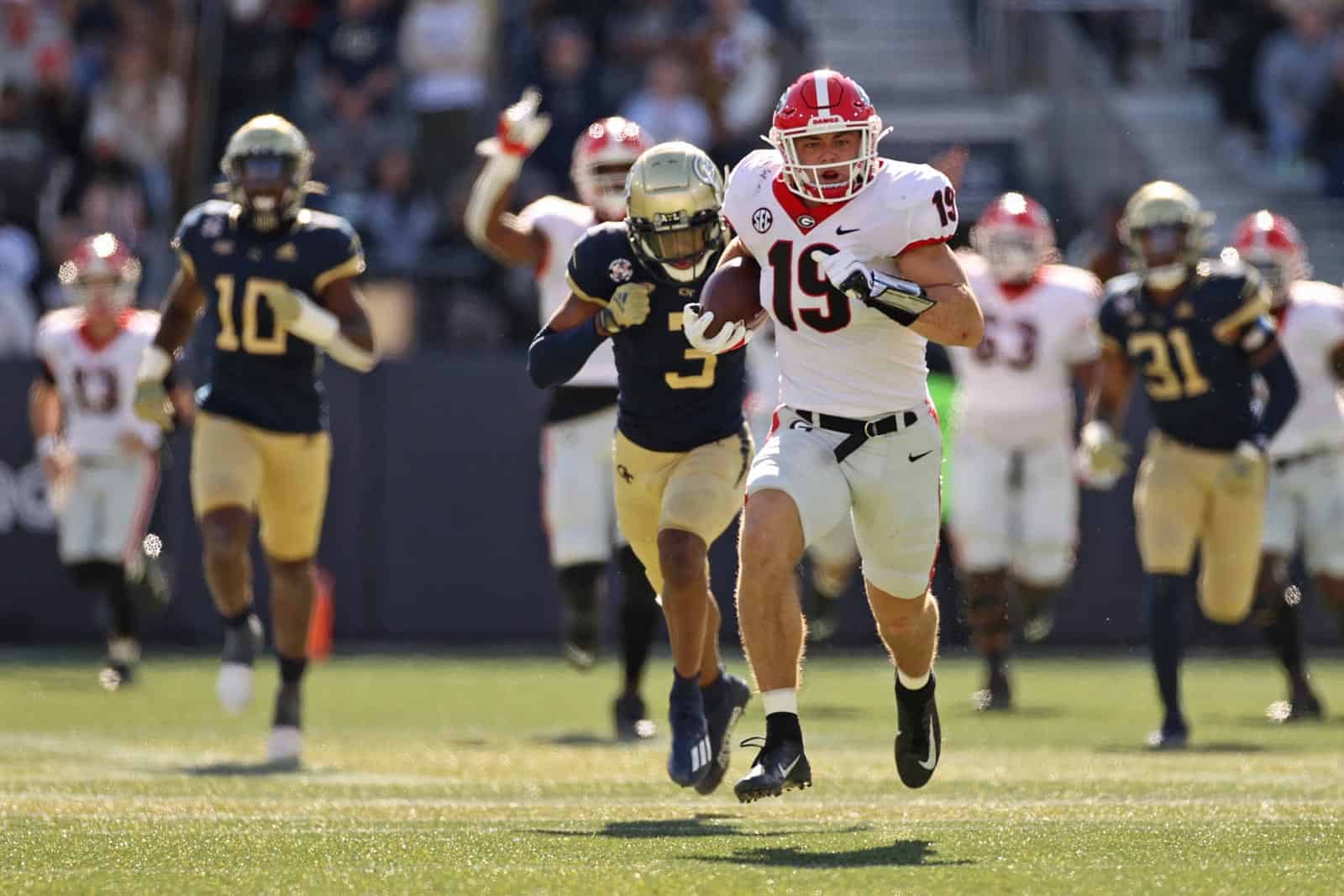 ATLANTA – Posting its third shutout of the season, the top-ranked University of Georgia football team completed its first unbeaten regular season since 1982 with a 45-0 victory over rival Georgia Tech Saturday afternoon before 54,400 spectators at Bobby Dodd Stadium and an ABC national television audience.

“I thought our guys started fast,” said Georgia head coach Kirby Smart following the game. “We challenged them to start fast. I was pleased with no penalties. We had some sloppy series offensively and defensively, but overall, they came out and executed to a standard. They didn’t play to the scoreboard, they played to our standard and I was proud of what they were able to do.”

After forcing a three-and-out on Tech’s first drive, junior returner Kearis Jackson set Georgia up with a 22-yard punt return to the Tech 36-yard line, but the Bulldogs were forced to settle for a 38-yard field goal from junior place kicker Jack Podlesny. On the following Georgia drive, the Bulldogs broke into the end zone as Bennett found sophomore wideout Jermaine Burton for a 25-yard touchdown, making it 10-0 with 4:38 remaining in the first quarter.

As the opening period came to a close, Bennett moved the Bulldogs into Tech territory with a 30-yard completion to sophomore receiver Marcus Rosemy-Jacksaint, followed by a 15-yard catch and run from junior tailback Zamir White. Now in the second, Georgia extended the lead as redshirt freshman wideout Ladd McConkey took in a screen pass from 11 yards out for a touchdown, assisted by a block from Bowers. The freshman tight end earned a score of his own on the following possession, taking a slant 77 yards to the house and bringing the score to 24-0 at the 11:03 mark.

Georgia Tech maintained possession for much of the second quarter, moving into Georgia territory on a 12-play drive lasting just under eight minutes, but the Bulldog defense forced a punt. Following Georgia’s first three-and-out of the afternoon, Tech looked to finally reach the scoreboard, but consistent pressure from junior linebacker Nolan Smith kept the score at 24-0 heading into the locker room.

The Georgia offense continued to roll into the second half, benefitting from a third down pass interference penalty at the Tech 39-yard line. The nine-play, 75-yard drive concluded with a 9-yard touchdown catch by Bowers in the corner of the end zone, his second of the game and 10th receiving score of the season. The Yellow Jackets again crossed midfield, but a pair of false starts stalled their drive.

Taking over at their own 33-yard line, the Bulldogs wasted no time adding to the lead as McIntosh ran for a 59-yard touchdown. On the ensuing Tech drive, freshman linebacker Jamon Dumas-Johnson’s sack led to a turnover on downs early in the fourth quarter. Starting near midfield, sophomore tailback Daijun Edwards took it in from three yards out, making the score 45-0 with nine minutes to play. Following one more Yellow Jacket punt, the Bulldogs ran out the clock for the shutout victory.

Georgia now turns its attention to next Saturday’s SEC Championship Game against No. 3 Alabama at Mercedes-Benz Stadium in Atlanta. The matchup begins at 4 p.m. and will be broadcast on CBS.

*Perfect 12-0 Regular Season: With today’s 45-0 victory, top-ranked Georgia improves to 12-0 for the first time since 1980 when the Bulldogs finished with that mark as consensus national champions. This is Georgia’s first undefeated regular season since 1982 (11-0) and just the fourth time in school history completing a perfect regular season with double-digit victories (1946, 1980, 1982). Georgia extends the nation’s longest active winning streak in the FBS to 16 games. This streak ranks as the second longest in school history. The Bulldog record is 17 games set during a three-year stretch from 1945-47. Georgia’s current winning streak includes nine on the road which is a school record. Also today, Georgia did not have a penalty for the first time since the 2019 win here versus Tech.

*Defense Posts Another Strong Effort: Top-ranked Georgia, the national leader in Scoring Defense (7.5 ppg), posted its third shutout this year to retain the Governor’s Cup Trophy. It was the first in the Tech series since 1964 (7-0 in Athens) and the first in Atlanta since 1957 (7-0). Tech became the seventh team this year to be shutout in the first half by the Bulldogs. Then for the sixth time this year, Georgia carried a shutout to the fourth quarter.

Opponents have scored just 83 total points on the Bulldogs this year. Georgia collected eight TFLs and had three sacks. The leading tackler was junior Nakobe Dean with six while Quay Walker and Lewis Cine had five. Tech finished with 171 yards of total offense.

*Pouring On The Points: Georgia tallied 45 points today on 463 yards of total offense on 51 plays. In the first half, Georgia built a 24-0 lead. For the year, the Bulldogs have outscored their opponents 488-83.

*Bennett Leads Bulldogs: Senior QB Stetson Bennett finished the day 14-for-20 for 255 yards and 4 TDs and improved to 12-2 as a starter including 9-0 this year. His first nine completions went to nine different Bulldogs including TDs to Jermaine Burton and Ladd McConkey. He completed a 25-yard scoring strike to Burton to cap an 80-yard drive, the one to McConkey covered 11 yards to complete an 87-yard drive. He fired a 77-yarder to freshman Brock Bowers for a 24-0 lead. Bennett marched the team 75 yards in nine plays culminating with a nine-yard TD to Bowers that made it 31-0. With 12:40 left in the game, and up 38-0, junior JT Daniels took over at QB.

*Bowers Headlines An Array Of Targets: In the first half, nine different Bulldogs caught a pass as they were 10 completions for 226 yards. Sophomore Jermaine Burton notched his fourth TD of the year on a 25-yard completion from Bennett. Redshirt freshman Ladd McConkey caught an 11-yard TD to make it 17-0 for his fourth TD catch of the year. He hit Brock Bowers for a 77-yard TD. Overall, Bowers led the team with three catches for 100 yards and 2 TDs. His 10 TD catches this year ranks second in Bulldog history, trailing only the 11 by Terrence Edwards in 2002. Bowers already owns the Bulldog record for receiving yards in a season by a TE with 652 on 37 receptions. Junior WR George Pickens saw his first action of the year as he’s been sidelined with a knee injury.

*Game Captains/Coin Toss/Starters: The captains were seniors Jamaree Salyer (OL), Justin Shaffer (OL) and Lewis Cine (DB). Georgia won the toss and deferred until the second half. The only first-time starter was junior RB Kenny McIntosh.

On the team’s focus one week before the SEC Championship…

“We’re just focused on doing the duty that lies near us. We knew what this game meant for us and for the history of this program. If we slipped up, anything could happen, so we were just focused.”

On the meaning of the victory…

On the return of George Pickens to the field…

“I just wanted to get the ball to him, get the ball in his hands on that play—like you said, shake the rust off. It’s good. He’s a great player. We’ve got to get some of the chemistry back that comes from being out that long. But he was extremely happy to be back on the field and we’re all happy to have him.”

On the defense’s performance…

“We talk about getting better every week and ascending, continuing to ascend every week. This is just taking a step in the right direction of what we’re trying to do.”

On the return of Pickens…

“It meant a lot just seeing the work he put in in the offseason, the rehab, how positive he’s been. A lot of guys can look up to the type of attitude he had and the way he attacked this rehab to get back. So, it meant a lot to see him get back out there and play again.”

On the defense posting a shutout…

“I love seeing that goose egg on the other side. If they can’t score, they can’t win. It’s always great for the defense to be able to go shut out a team, definitely a team as good as Georgia Tech.”